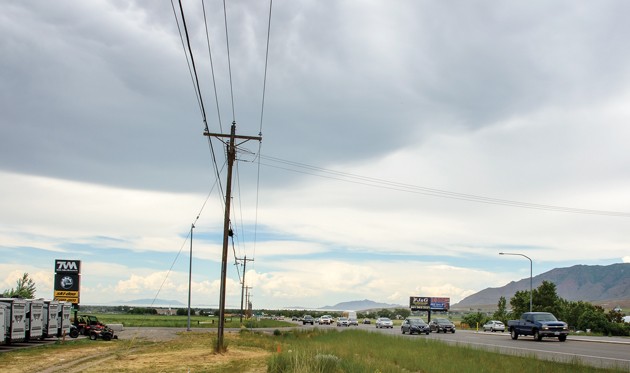 As the storm rolled across the county, 10 utility poles were struck by lightning, according to Rocky Mountain Power spokesperson Tiffany Erickson. There were eight utility poles that were downed as a result of the storm along state Route 36 between Erda Way and 2400 North, according to Utah Highway Patrol Sgt. Nick Street.

Due to downed power lines and utility poles, a single lane of southbound SR-36 was closed while the damage was addressed, according to Street. UHP troopers provided traffic control along the affected area.

A total of 1,302 customers lost power as a result of the damage from the storm, Erickson said. After power was rerouted around the affected area, all but 37 customers had their power quickly restored.

Lightning strikes also caused five wildfires in Tooele County by 7 p.m. on Thursday, according to the Utah Fire Info Twitter account, which is a joint effort between state and federal agencies. By 8 p.m., all five of the lightning starts were 100% contained and fully suppressed, through a combination of local, state and federal resources.

Over the weekend, a flood watch was also issued for Tooele County and Salt Lake County, with special concern for Little Cottonwood Creek. Despite warmer temperatures melting the remaining snowpack and a wet spring, no flooding activity was noted in the county, according to Tooele County Emergency Management Director Bucky Whitehouse.

“We are very encouraged with how the current drainage channels are handling the water,” Whitehouse said.

Despite the flood watch, Whitehouse said there wasn’t increased flow as was anticipated by the National Weather Service. Historical data shows the peak of snowpack melt in Tooele County is between May 10 and June 15.

Throughout the spring, TCEM and other local partner agencies have worked on flood mitigation, such as clearing debris and plants from drainage channels.