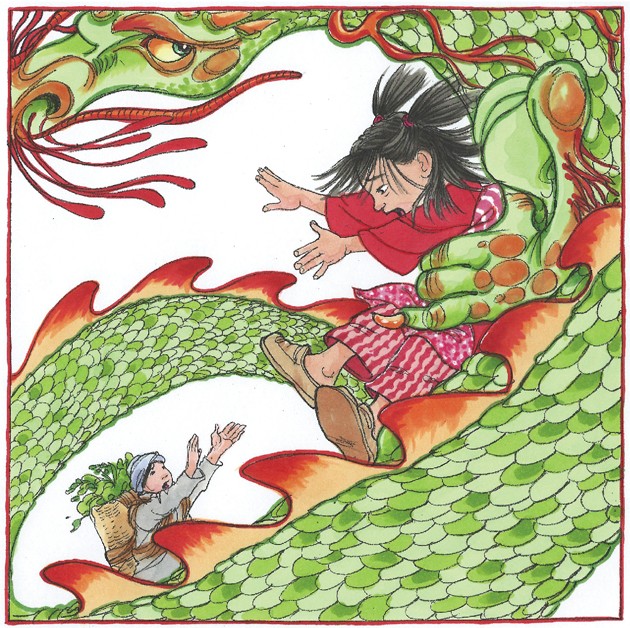 Once upon a time, a woman lived in the mountains with her little daughter, who always dressed in red. Everyone called her Little Red.

One day, mother and daughter were working in the fields when suddenly a gust of wind blew out of nowhere. Little Red looked up and saw an enormous dragon with ferocious claws. Before she could scream, the dragon grabbed her and swooped her up into the sky.

Her mother cried, “Stop!” But her words were lost in the wild wind.

Little Red called, “Mother, mother, do not cry. My brother will rescue me in the sky.”

Then the dragon carried her away.

The mother fell to her knees and stared into the empty sky. She had only a daughter. Little Red had no brother. What could the girl be talking about? Her heart was broken.

Bent with grief, she began to walk home. Blinded by her tears, she did not see the low-hanging branch of a bayberry tree. As she walked past, her hair got caught in the branch. She reached up to disentangle it and noticed a single red berry. Without thinking, she picked the berry and swallowed it.

To her amazement, by the time she reached home, she was pregnant.

That very night, she gave birth to a boy as round and red-cheeked as that berry.

“I’ll call you my little Bayberry,” she whispered, cradling her boy.

But she could not cradle him for long. Within days, he was as large and strong as a teenager. Whenever his mother looked at him, she thought of Little Red. She wanted to ask her son to rescue her daughter, but she could not bear the thought of losing him as well. And so she kept Little Red and the dragon a secret, and she cried only after she knew her boy was fast asleep.

One day, a crow landed on the roof of the house and yelled to Bayberry, “Your sister is caught up in the dragon’s lair, digging rocks with hands that are bare!”

When Bayberry heard this, he was puzzled. That evening, he said to his mother, “Do I have a sister?”

His mother began to weep. “Yes,” she said, and she told him the story of the dragon that had carried his sister away.

The moment he heard the story, Bayberry stood and said, “I am going to rescue my sister and kill that evil dragon!”

His mother reached to hold him back, but he brushed past her and marched away.

Bayberry walked for many miles high into the mountains until he reached an enormous rock on the road that blocked his way. It was smooth on top, worn by travelers who had climbed over it. On either side was a steep drop to the valley below.

“I must remove this obstacle,” he told himself. “If I don’t, many travelers will be hurt.”

Summoning all his strength, he reached down and shifted that rock to the side until it rolled into the valley. In its place a golden pipe appeared. Bayberry picked it up and blew on it. As he did, the mountain and valley shivered with the deep sound, and all the frogs, worms, lizards, bees and rabbits began to dance.

Now Bayberry understood. He had discovered a way to overcome the dragon.

He walked on, holding the golden pipe, and he climbed higher and higher into the clouds. At the top of the mountain, he spotted a cave. At the entrance of the cave stood the evil dragon surrounded by piles of bones. There, just behind him at the entrance to the cave, was a little girl digging with her bare hands at the stone.

Bayberry began to blow on his pipe, and the music immediately set the dragon dancing.

“What’s this?” he roared. “Why are you playing so fast? Stop right now, or you won’t last!”

But he could not stop dancing.

Little Red saw what was happening. Making sure to steer clear of the dragon, she crept out of the cave and toward the boy playing the pipe.

Bayberry kept playing, and the dragon danced on until fire streamed from his eyes and steam poured out of his nostrils. Breathless, he cried, “Brother, brother, you are stronger! Stop your playing. Blow no longer!”

But Bayberry did not stop. As he played, he walked away from the cave. The dragon was forced to follow. They moved toward an icy lake, and the dragon could not stop dancing. When they reached the lake’s edge, Bayberry blew harder still.

“Stop, stop!” the dragon begged. “I cannot swim in ice. Please stop. I promise to be nice.”

But Bayberry did not stop, and the dragon danced right into the lake. He crashed through the icy surface, dancing still. Leaping up to gasp for breath, the dragon cried, “Please stop! You are stronger! I’ll keep your sister no longer.”

Bayberry stopped for one moment to say, “If you stay in this lake, this promise I shall make.”

“I promise!” the dragon gasped, but Bayberry began to play again.

Before long, the dragon could not catch his breath. He sank to the bottom of the lake.

When Bayberry was certain he was lost forever, he took Little Red’s hand and walked her home.

When their mother saw them, she wept with joy.

And they all lived happily ever after.