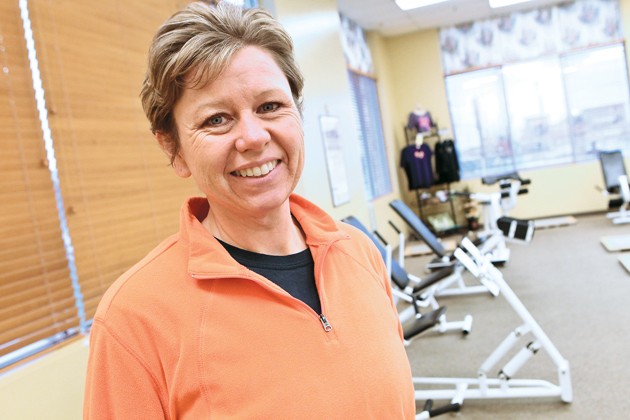 Karrie Middaugh at Curves gym in Tooele on Monday. Middaugh ran a mile a day for the Live Fit One Simple Step Challenge contest.

The coalition launched a monthly contest on its website for the first time in March. The contest, called the “One Simple Step Challenge,” asked participants to commit to one health improvement each week for a month.

Participants had to report how well they did on completing their goal at the end of each week. With each weekly goal completed, their name was entered into the drawing.

Although originally 10 winners were supposed to be chosen to win a small prize, Malaena Toohey, health educator and obesity prevention coordinator for the Tooele County Health Department, and chair of the Live Fit Tooele County Coalition, said only seven people reported back on their progress after registering. However, 26 people initially signed up to participate.

Middaugh and Royal will receive the two grand prizes — $15 gift cards to Subway — because they reported back weekly on the progress of the goals they set for themselves, Toohey said. The other five winners reported back once or twice throughout the month, and will be able to choose prizes like a healthy cookbook, a water bottle or a calorie counter book.

A Tooele resident, Middaugh committed to make one simple change to her routine each week.

“I picked four different things to work on throughout the month because it made me accountable,” she said. “I knew I put in for the contest and put it out there, so I knew I was going to have to report on it. It helped me stick with it.”

“One night I had to take a flying leap to jump into bed before the clock turned to 10:01 p.m.,” she said. “I wanted to meet that goal. I try to be healthy as is, but I wanted to do those things because I’m training for a marathon. Overall, at the end of the month I was able to do a 21-mile run on Saturday. I felt really good and those things helped add toward my fitness.”

Royal’s weekly goal remained the same each week. She decided to not drink caffeinated beverages, like Diet Coke, throughout the entire month. She also committed to drink more water instead. She was able to complete her goal.

Other simple steps the winners committed to take included drinking more water, eating more fruit, getting moderate exercise at least three to five times a week, and using portion control when it comes to meals and snacks.

Penovich, of Tooele, said her goal throughout March was to exercise five days a week.

“I hadn’t exercised for a couple of months, so what I did was exercise five days a week to a walk-at-home DVD, where you just walk at home for a half an hour,” she said. “I feel really good when I exercise, but I wouldn’t have done it without the contest because I haven’t exercised for a few months. That motivated me to do it to get back in the routine.”

About the contest, Toohey said, “Each of our winners did the best they could, and that’s all we’re asking. We want people to make simple changes. Even if they’re not perfect, it’s better than not even trying.”

Although the goal was to have 10 winners, Toohey said because the website is fairly new and this was the first time a contest was held, the coalition is still considering it a “trial period.”

“We are going to talk as a coalition at our next meeting to determine how this first contest went and what we want to do in the future,” she said. “Maybe 10 winners was too many, or maybe the contest rules weren’t clear enough.”

Toohey said the coalition may decide to shorten the contests to just a week long, and may not have as many winners as the first time around.

“I would like to do something every month, but I think we need to discuss further as a coalition to see exactly what we want,” she said. “The community is also welcome to contact us on livefittc.org. We would love the community’s input on the contests that we’re doing. We’d love to know what citizens would like to see us do.”
Toohey said she also hopes to see more people register for future contests.

“We’re still trying to get the word out about the website,” she said. “We encourage people to share the site with family and friends and hopefully we will get lots of people participating.”

The next meeting of the Live Fit Tooele County Coalition is Wednesday at 11 a.m. at the Tooele County Health Department in room 180. The community is invited to attend to provide input about future contests.