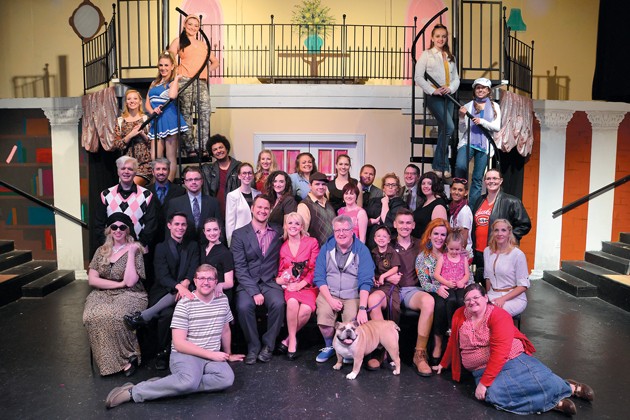 Six members of the cast for “Legally Blonde,” which is currently running at the historic Empress Theatre in Magna, live in Tooele County. The show is also directed by Glen Carpenter, the head of Stansbury High School’s drama department.

September 20, 2016
Local actors flock to be in plays on Empress Theatre’s stage

Not only are there six local residents acting in “Legally Blonde,” Metler said, but over the years she has met many other people from the county through Empress.

“It’s just a really fun little theatre,” she said. “It’s a little bit of a drive from Tooele, but it’s fun for me … to meet other people from Tooele that also go there and get to know other theatre people from where I live [in Stansbury Park].”

Metler typically produces 3-4 shows each year and serves on the theatre’s board of directors. The camaraderie she feels at the theatre keeps her coming back.

“There’s a great sense of community even though it’s in Magna,” she said. “It’s a great theatre. They put shows on all year long that are great for families, great for date nights. … It’s funny that a theatre in Salt Lake County would help me get to know my neighbors from Tooele County.”

The Empress Theatre building first became a community theater 10 years ago when the Oquirrh Hills Performing Arts Alliance, a nonprofit group based in Magna, took it over, said Jen Bair, OHPAA volunteer.

It was originally a burlesque theater, added Tooele resident Jorden Cammack. Cammack is not involved in “Legally Blonde,” but she has directed community shows at Empress in the past.

One of Cammack’s favorite things about the theatre is its nontraditional stage — the audience is seated on two sides of the stage in a style similar to theatre-in-the-round, she said.

“The building is a very old building. It’s got that original facade on it that [makes it a] very classic-looking venue, then you get inside and it’s a very intimate space,” Cammack said. “[It] allows for a strong connection between the audience and the actors. That’s not something you get everywhere. It’s really fun to work as an actor and a director.”

For Thomas, the theatre’s nontraditional stage required her to adjust her acting. “Legally Blonde” is her first production at Empress, although she has performed in local venues various times. Overall, she’s enjoyed the experience, she said.

“It’s interesting because it’s such a small, kind of weird little theatre to work in, but the people are really great and the audience is always really receptive,” Thomas said. “It’s fun to have them so close. … It’s a different experience for me — I’ve never done theatre-in-the-round before.”

In addition to the theatre’s feeling of community and nontraditional stage, its constant show schedule is a draw for local theatre lovers. Amy Bodily, a Stansbury resident, has directed or acted in five shows at Empress.

“I won the [OHPAA’s] award for best director last year for a show that was lucky enough to have members of the cast from Tooele County,” Bodily said in an email. “I love this little theater and the opportunity it gives for those of us in Tooele that do not have a year-round theater to use our talents and [give our] passion an outlet.

“It will be valuable for the community to learn of this gem just around the mountain,” she added.

Carpenter enjoys directing at the Empress Theatre because it gives him a chance to work with an adult cast.

“I get a chance to work with the community and do shows I wouldn’t be able to do at the high school level,” he said in an email. “In a community theatre setting, you’re able to do shows with a bit of a more advanced theme to them.”

Carpenter has always wanted to direct “Legally Blonde,” but couldn’t do it at Stansbury High School mainly due to the language in some of the show’s song lyrics.

“What I really love about the show is that the lead character, Elle, doesn’t change who she is and still triumphs in the end,” he said. “She is able to show that she is capable of doing whatever she wants to do without forgetting who she is. I think that’s a great message to bring across to an audience. It’s also one of the silliest [and] fun shows I’ve ever seen.”

So far, audiences’ responses to the show have only been positive, Carpenter added.

“Legally Blonde” opened on Sept. 9. It will run on Friday and Saturday every weekend through Oct. 1. Tickets are still available for shows on Sept. 23, 24 and 30, as well as a special Monday night performance on Sept. 26 and the final show Oct. 1. All performances begin at 7:30 p.m.

Tickets are available online at empresstheatre.com or at the door. All seating is reserved however, so while there are typically still tickets available the night of each performance, the best seats may be gone, said Jen Bair, volunteer for Oquirrh Hills Performing Arts Alliance.