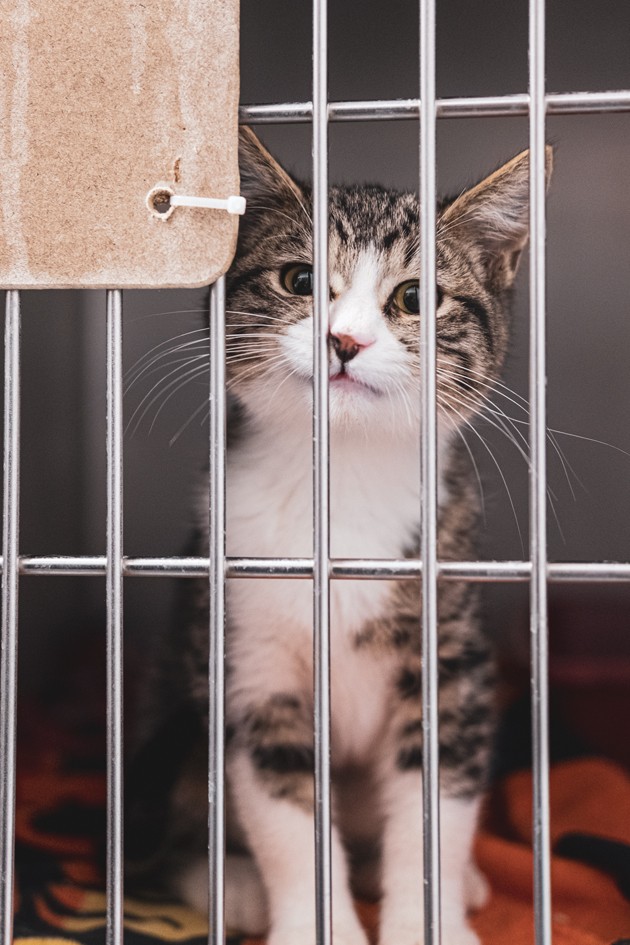 A cat awaiting adoption sits in a cage at the Tooele City Animal Shelter Friday.

Due to the diverse line-up of animals accepted by the shelter, space can be sparse. October statistics have shown that the animal shelter is encountering an overpopulation burden, especially cats.

“We’ve just lately experienced a lot of dogs. We’ve been pretty good on the dog population. More dogs get adopted than cats do, but the cat population is overflowing,” she said.

In the animal shelter’s October statistics, 128 animals were impounded, 30 were adopted, 41 were returned to owners and 6 were rescued. Thirteen were either dead when they arrived at the shelter and were subsequently disposed of and 3 died in the shelter.

The shelter falls under the administration of the Tooele City Police Department and Tooele City. Animals that are retrieved inside city boundaries are transported to the shelter. The City currently employs two full-time animal control officers who work for the police department and respond to calls for service. The animal is held by the shelter for five business days. If left unclaimed after that time period, the shelter retains custody of the animal.

“Right now we only accept animals that come from our jurisdiction,” said Tooele City Police Sgt. Jeremy Hansen. “In the future, we’d like to have this as a county-wide animal shelter, but right now, it’s not. If the animal is picked up in Erda, Lake Point or Stansbury, a deputy is contacted and the county handles it. People can also pay a $10 fee to surrender their animal, which is then adopted back out.”

Higgins said that in the event of overpopulation and potential euthanasia, Perfect Paw Prints and the Humane Society helps out when they are able by pulling from the animal populations. The Humane Society of Utah set a goal to find homes for 400 cats and kittens in four weeks in response to an above-average number of homeless cats in animal shelters across the state, according to a press release from the Humane Society.

“We have 28 cages for cats, and we can double them up on cages to fit as many as we can, but when we reach an overload level, that’s when we need to reach out to rescues,” Higgins said.

“We do what we can and we don’t want to euthanize animals. However, we also have to make space for the ones coming in,” she said. “We’ve actually had to euthanize zero animals due to overcrowding all year long so far. We’ve only had to euthanize feral, dangerous or sick animals.”

As part of an ongoing effort to increase adoption awareness for its animals, the shelter operates a Facebook page to conduct outreach with Tooele County. The page is followed by over 8,300 people.

“The animals that get put on Facebook receive a lot of attention,” Hansen said. “It probably gets 3 to 4 times the amount of visual traffic that our police department page does, so the animal has a very strong presence on social media.”

For matters pertaining to the adoption of animals, information can be found by the shelter’s official Facebook page or by visiting the shelter at 3312 N. 1200 West. To report a lost animal, email the shelter at animalshelter@tooelecity.org

Cleaning and animal supplies, as well as monetary donations are also welcomed by the shelter. Donations can be arranged by calling 435-882-4607.