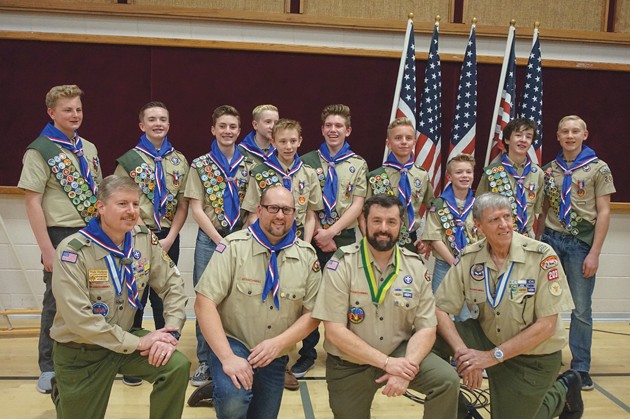 When The Church of Jesus Christ of Latter-day Saints and the Boy Scouts of America announced in 2018 that their over 100-year-old partnership would end in 2019, the leaders of Troop 203 in Tooele decided to make sure no Scout was left behind.

Every boy was going to have a chance to earn their Eagle Scout rank, according to John Bruns, assistant Scoutmaster of Troop 203.

The efforts of leaders, parents, and the youth culminated in an Eagle Court of Honor where 10 boys received their Eagle Scout award.

In May 2018 the church and BSA. issued a joint statement that read, in part:

“In this century of shared experience, the Church has grown from a U.S.-centered institution to a worldwide organization, with a majority of its membership living outside the United States. That trend is accelerating. The Church has increasingly felt the need to create and implement a uniform youth leadership and development program that serves its members globally. In so doing, it will be necessary for the Church to discontinue its role as a chartered partner with BSA.

“We have jointly determined that, effective on Dec. 31, 2019, the Church will conclude its relationship as a chartered organization with all Scouting programs around the world. Until that date, to allow for an orderly transition, the intention of the Church is to remain a fully engaged partner in Scouting for boys and young men ages 8–13 and encourages all youth, families, and leaders to continue their active participation and financial support.

“While the Church will no longer be a chartered partner of BSA or sponsor Scouting units after Dec. 31, 2019, it continues to support the goals and values reflected in the Scout Oath and Scout Law and expresses its profound desire for Scouting’s continuing and growing success in the years ahead.”

Troop 203 in Tooele was impacted by this announcement, according to Bruns.

“Looking back now, this action brought about a perfect storm of cooperation between the scouts, their parents, and their leaders,” Bruns said. “For about half of these scouts only had a month leeway to finish on time, but had to hit all of their target dates for advancement in order to beat the deadline.”

During the 20 months between the announcement and the end of December 2019, 17 of Troop 203’s Scouts earned a cumulative total of 313 merit badges and 53 rank advancements.

During the 20 months, the troop provided 24 nights of camping opportunities to the scouts, Bruns said.

The 13 Eagle Scouts range in ages from 13 to 17. Their Eagle Service Projects provided over 610 hours of service to the community.

The remaining 10 received their Eagle Scout rank in a ceremony held in January 2020.

Attendance at the Eagle Court of Honor was estimated at 300 people, with 70 to 80 previous awarded Eagles sitting in the “Eagle’s Nest” during the ceremony, according to Bruns.

Not all of the Scouts that were in Troop 203 completed their Eagle scout requirements with the troop by the end of 2019.

Troop 203 had three Scouts move away during the 20 months. One moved to another part of Tooele, one to Idaho, and one to Kansas.

The one who moved to Kansas only had one requirement remaining on two different merit badges and to do an Eagle Service Project to finish his requirements for Eagle.

Another Troop 203 Scout received his Life rank in early December 2019 and will finish his Eagle in another troop in Tooele, according to Bruns