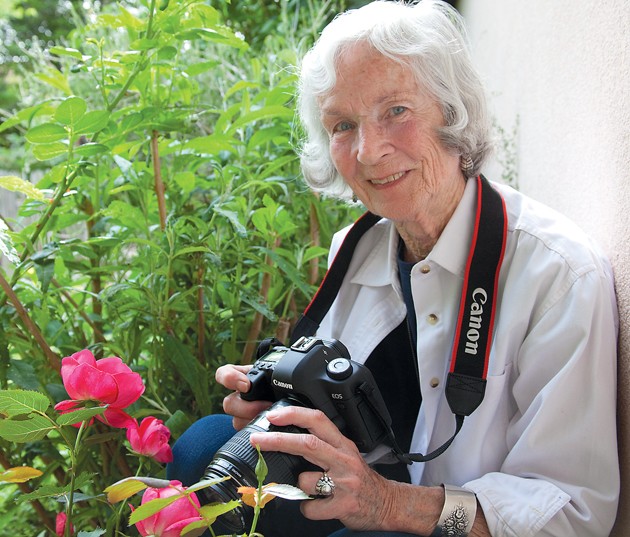 Patricia Jessie holds her camera after photographing a blooming rose in her Stansbury home’s yard. The fine arts photographer has a gallery of her abstract experiments on display at the Tooele County Chamber of Commerce and Tourism this month.

May 12, 2015
Local fine arts photographer knows how to smell the roses

Patricia Jessie hasn’t always been a fine arts photographer. Nor has she always been a Stansbury Park resident. It took years to adapt to these new life titles — in fact, she said, she’s still adjusting and exploring her new roles.

Before coming to Tooele County and before taking up photography, Jessie focused on sketching, mostly in charcoal, but she also experimented with pastels and other media. She took art lessons in high school and college, but her goal was to become a fashion designer, not a fine artist, so she focused on the study of color and fabric.

Though she never had any formal training in photography, Jessie had just begun to make headway for herself as a professional photographer of scenery and landscapes in Massachusetts before her move here.

“I had just become famous in a way — back east people would stop me in the grocery store and ask me if I was who they thought I was,” Jessie said. “But when we moved out here, I had to start all over.”

It wasn’t just that Jessie had to rebuild her social and professional networks — although she faced that challenge, as well — but the lighting and landscape was so different here that after her move in the early 90s, she had to completely relearn her art.

The advent of digital photography helped ease Jessie’s learning curve. Then, while experimenting with light and color and the capability of her new digital tools, Jessie discovered a new niche — abstract photography based on light manipulation and close-ups of the flowers in her own yard.

Jessie, a master gardener who learned to love flowers while growing up around her mother’s spectacular gardens, has planted more than 300 roses in her Stansbury Park yard. She said that as an artist, she was attracted to the flower’s natural color and beauty.

“The most fascinating part is when you zero in to the middle of the flower and it’s like walking into a fairy land,” Jessie said.

Although she uses digital cameras, Jessie said she still uses manual settings and prefers to spend her time setting up her camera to take a perfect photo, rather than taking dozens of shots and then editing them on a computer with Photoshop — a program Jessie said she has yet to learn to how to use.

That one-shot nature of her art can be a challenge at times, Jessie says. She once missed capturing an image of an airplane in flight silhouetted against the sun — and still hasn’t forgiven herself,

“That was probably one of the most devastating things in my life as a photographer, because I could have sold that over and over,” she said.

But Jessie focuses less on selling photos now. Instead, she said, it’s more about self-satisfaction and re-building her own brand. In a way, her career as an artist has come full circle — growing up, Jessie’s mother was known for her flower gardens, and then Jessie herself went on to work a part-time job as a book keeper for a florist.

Now, in retirement, she grows and photographs her own flowers. But she’s still experimenting, looking to further define her niche. That’s the key to recognition, she said — she needs a unique, signature look.

“To get recognition, you have to have your own style, so that is sort of a goal of mine,” she said.

Jessie has experimented with different subject matter, different sets of equipment, even different media — dabbling in watercolors and oil painting. Right now, she said, she is experimenting with printing her photographs on different kinds of paper.

Her work is currently the subject of a gallery on display for the month of May at the Tooele County Chamber of Commerce and Tourism. The display, titled “The Sun Shines in Tooele County,” features abstract experiments in light and color from Jessie’s flower garden.

“They’re not bad,” she said of the photographs. “Thing is, it costs an arm and a leg to frame them.”