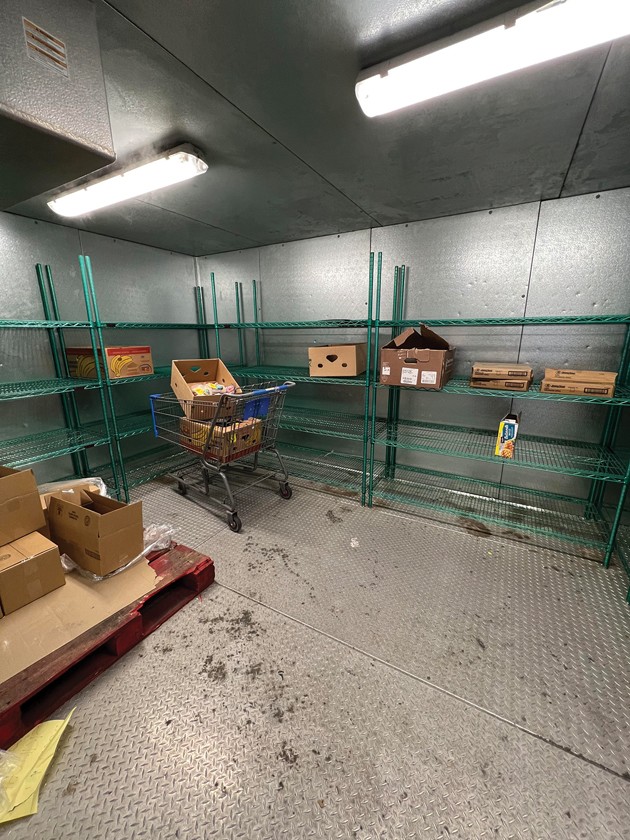 An empty walk-in cooler at the Tooele Food Pantry on May 12.

The Community Resource Center is asking the community for donations as a severe shortage of food has left their shelves as bare as Old Mother Hubbard’s cupboard.

Christy Johnson, director of the Community Resource Center, took the Transcript Bulletin on a tour of the food bank last week.

Johnson opened several fridges and freezers which are usually full of eggs, cold goods, and frozen foods, but they were empty.

“These should be all full,” she said motioning to an empty fridge. “Honestly this won’t even last through the week. It’s so sad.”

Last year, the statewide event collected over 60,000 pounds of food for the Tooele Food Bank. Each year after the event, the food bank usually had enough food to last until the next food drive.

This year, there was no statewide food drive — leaving the Tooele Community Resource Center short on food.

“The food drive was a great way to get things brought in and get the word out but they didn’t have the event this year,” Johnson said. “It’s disheartening to see what has happened by not having the event.”

The food bank has a good supply of canned green beans, chips, dried beans that take over eight hours to prepare, and pasta sauce, but these items can’t really feed a family, according to Johnson.

“We have pasta sauce but no noodles,” Johnson said, holding up a can of tomato sauce. “We also have beans but a lot of people don’t cook those, because they aren’t something that you can really make a meal out of.”

On top of the shortages, the food bank has seen an increase in families and individuals needing food.

“A lot of people living in the county are not having enough to make ends meet and they come here to offset those costs,” Johnson said. “It’s really hard to give them a food order when there’s no meat and no milk.”

Currently, the food bank serves over 500 families each month. They provide food countywide.

“We have people that come to the pantry from Dugway, Wendover, and Ibapah,” Johnson said. “It’s for the entire community and county.”

The food pantry is in need of canned meals, like chili, beef stew, soup, and ravioli; boxed meals like tuna and hamburger helper, mac and cheese, pasta and bread. They also need milk, eggs, cheese, frozen meat, and canned meat.

Glass items aren’t accepted, because they break easily, according to Johnson.

“No one should have to go without when we have so many people who have an abundance of things,” Johnson said. “I like to ask people if they could give up something for a month, like their fancy sodas or coffees, and donate it to the food bank, it would make such a difference.”

“We had a cute lady bring in just five cans of chili,” Jeanine Richens, pantry manager, told the Transcript. “That is going to feed five families. I just want people to understand that even a donation for one meal is super helpful.”

“It helps you really appreciate what you have when you give up something for someone else you don’t even know,” Johnson said.

The food pantry is one service offerd by the Tooele Community Resource Center, operated by a non-profit called Switchpoint that aims to help those experiencing homelessness and poverty.