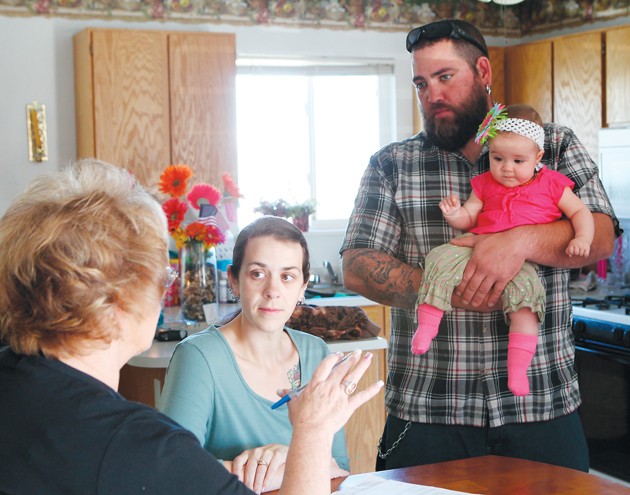 Prudential Realtor Sandy Critchlow talks through the closing process with Misty and Chris Perry while he holds their daughter Emmalynn Perry Thursday morning. Local home sales went up during the first quarter.

Short supply and high demand for homes in Tooele County continued to increase prices during the first quarter of the year, according to local real estate agents.

“It’s a seller’s market,” said Chris Sloan, broker for Group 1 Real Estate Tooele. “We’re down to less than a six-month supply of homes, which is a low supply.”

This is the fifth consecutive quarter that the median sales price of a home in Tooele County increased over the same quarter in the previous year, according to statistics from the Wasatch Front Regional Multiple Listing Service.

The total number of homes sold in the county also increased in the first quarter.

The amount of time homes stay on the market has been cut in half from a year ago.

The decrease in time on the market is due to fewer and faster short sales along with increased demand, according to Griffith.

Tooele County real estate agents see the first quarter of 2013 as a continuation of the market recovery of 2012.

The real estate market in the county improved in 2012 following a four-year trend of decline.

Sloan expects sales to continue to increase in the next  quarter as buyers try to close on homes before a USDA program that provides a no-down payment and no mortgage insurance expires for homes in Tooele City on September 30.

The rate of growth in the market the last five months has been a steady one that is sustainable, according to Griffith.

“It looks like the market has settled down and sales are coming back to more of a normal pattern,” she said.