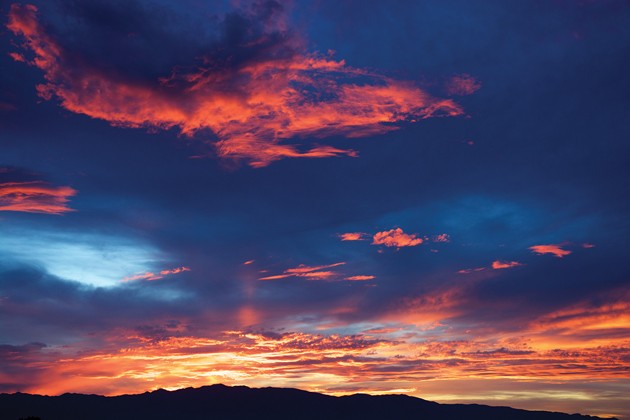 The sun sets over the Stansbury Mountains in one of the featured images in Jolie Gordon’s 2017 calendar.

Tooele County’s dramatic and diverse landscape is again being featured in a 2017 wall calendar published by a local photographer.

Jolie Gordon of Lake Point, published 100 copies of a 2016 landscape calendar last fall and sold every one before New Year’s Day. Because of that success, she has published a new calendar for 2017 that features the county’s mountains, valleys, West Desert and Great Salt Lake.

“I had such a wonderful time doing last year’s calendar and the positive response encouraged me to produce one for 2017,” she said. “I love photographing Tooele County’s landscapes throughout the four seasons and showing the world how special this place truly is.”

Like last year, the new 13-month wall calendar features 14 landscape photographs of the county, in addition to dozens of wildlife and nature candids.

All of the photographs are Gordon’s work, and she is well known in the county for her landscape photography. She was a frequent contributor to the Tooele County Emergency Preparedness Program Calendar that existed for several years until the last edition was published in 2011.

In fact, the absence of that calendar, which was distributed to every home in the county and paid for with funds from the Chemical Stockpile Emergency Preparedness Program, is what prompted Gordon to publish her own calendar.

“I think the emergency preparedness calendar did a great job of showing and reminding residents of just how beautiful our county is,” she said. “It had big-name landscape photographers in it, too, like Jerry Sintz, John George, Scott T. Smith and others. It was an honor for me to have my photos published with them. I miss seeing that calendar around and thought, ‘Hey, why not bring a little bit of it back.’”

But her calendar’s design and printing isn’t funded by a federal program with deep pockets; she and her husband, Tony, are the sole publishers, which means they front all of the costs — and risk. They got most of their money back last year and hope to again this year.

“We barely broke even last year, but we’re not doing this for the money,” she said. “I’m trying to see if there’s a market for a Tooele County wall calendar. And if there is, I’d like to see it expanded each year to include other local landscape photographers. There are several others who live here like me and make the county’s landscape a priority. It would be great to exhibit their work in the calendar, too.”

But to do that, she will need additional funding, either through advertising, corporate sponsors, donations — or a combination of all three.

“This is only our second year doing this, so we’ll have to see how it goes,” she said.

The calendar’s cost is $14.95, which includes sales tax. It is available at Transcript Bulletin Publishing’s front office at 58 N. Main St. in Tooele; Millpond Spa and Retreat, 25 Plaza Court in Stansbury Park; and from Gordon, who can be reached at joliegordon@me.com.

Like last year, only 100 calendars were printed in early December and are going fast. Called “Land of Light: Photography of Tooele County, Utah by Jolie Gordon,” the calendar was designed and printed by Transcript Bulletin Publishing in Tooele.