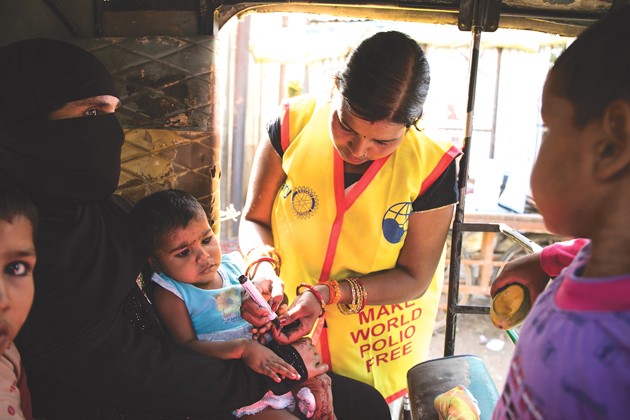 A health worker stationed at a transit point searches for children who need to be immunized against polio during the Subnational Immunization Days in Shahjahanpur, Uttar Pradesh, India, June 23, 2019. (Courtesy Rotary International)

On World Polio Day this Thursday, thousands of Rotary Clubs around the world will hold events and fundraisers to recognize their progress in the global fight to end polio.

One of those clubs is the Tooele Valley Rotary Club in Tooele County.

In 1988, Rotary International and its partners founded the Global Polio Eradication Initiative, which is dedicated to eradicate polio’s paralyzing affects on children.

Rotary’s collaboration with the World Health Organization and other world and national disease and prevention control centers has proved effective through GPEI. The number of wild poliovirus cases was reduced to just 18 cases this year, according to Rotary International.

Recently some members of the Tooele Valley Rotary Club spent two weeks in Agra, India. The women members spent time in local schools training girls and teachers how to implement the Days for Girls program. The program teaches girls personal hygiene, self-defense, and how to protect themselves against human trafficking.

The men of the group made an assessment to determine the safest water supply. In a future trip, the Rotarians will assist Agra government officials, in conjunction with the Agra Rotary Club, to improve their water distribution system. A safe water supply for the population will protect against polio.

World Polio Day is observed in late October to honor the birthday of Dr. Jonas Salk, who led the development of the first polio vaccine.

Poliomyelitis is an incurable, highly infectious disease that most commonly affects children under the age of five. The virus is spread person to person, typically through contaminated water. It can attack the nervous system and lead to paralysis.

Although there is no cure, there is a safe and effective vaccine. Rotary and its partners have immunized over 2.5 billion children worldwide with this vaccine.

There are only three countries that have not stopped transmission of the wild poliovirus: Afghanistan, Nigeria and Pakistan, according to Rotary International.

In 2016, there were 37 polio cases confirmed worldwide, a reduction of more than 99.9% since the 1980s when the world saw about 1,000 cases per day, according to Rotary International.

Until polio is eradicated, all countries remain at risk of outbreaks, according to Rotary International. More than one million Rotary members have donated time and personal resources to end polio. Every year, hundreds of Rotary members work side-by-side with health workers to vaccinate children in polio-affected countries.

Rotary Members work with UNICEF and other partners to prepare and distribute mass communication tools to reach people in areas isolated by conflict, geography or poverty.

These “polio ambassadors” have helped educate the public about polio through public service announcements, social media, and public appearances.

GPEI is also working to strengthen surveillance and immunization systems in African and eastern Mediterranean regions.

The goal of the World Health Organization is to ensure that polio has truly ended, according to Rotary International.

In many countries surveillance against polio is maintained the GPEI. Vaccination activities continue to make certain that children in vulnerable regions of the world remain protected as long as there is polio anywhere.

To learn more about Rotary, the Tooele Valley Rotary Club meets at 12:30 p.m. on most Mondays at Tooele Technical College. Contact Sharon Falerdeau for information on how to join at falardeau.sharon@gmail.com.