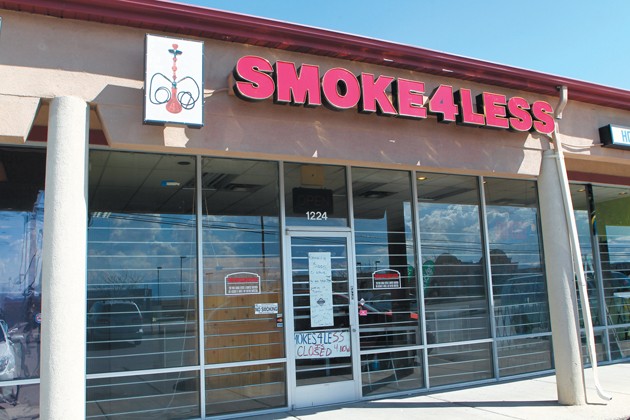 Closed signs sit in the window of the Smoke 4 Less store in Tooele Wednesday afternoon. Local smoke shops are in the process of being closed for allegedly selling illegal substances.

Three smoke shops in Tooele City have had their business licenses revoked and one is permanently closed after allegedly selling illegal substances to undercover Tooele City police officers.

According to city officials, police have been investigating Smokes 4 Less for about a year. The store, which was located at 1221 N. Main St., had its business license revoked by the city on Nov. 16, 2012.

The store had allegedly sold spice, or “potpourri,” to police detectives on four different occasions last year, according to Police Chief Ron Kirby. The store has been permanently shut down.

The substances allegedly sold to the officers at Smokes 4 Less were tested by the State of Utah Crime Laboratory and were found to contain illegal controlled substances, or synthetic cannabinoids.

“The officers went in plain clothes and simply asked to buy spice, but they didn’t use the term spice,” Kirby said. “The common term is potpourri, but it doesn’t look like the type of potpourri that you would buy somewhere like Walmart. There are several different chemical structures that fit into the category. All four times they sold to us, it ultimately tested to be an illegal drug.”

Besides selling illegal substances, Smokes 4 Less also violated several city ordinances, Dunlavy said. In April 2012, an ordinance regarding business license revocation was updated to state that specific violations, not just breaking the law in general, would result in revocation of a business license.

These violations include crimes committed by employees or business owners and sales of illegal substances.

Tooele resident Cyndia Shaw, who was an employee at Smokes 4 Less, said the notice of revocation was a big surprise to all the employees working at the shop.

“We heard that spice was talked about being banned, but we’d never had any warnings or compliance checks in the three years I’d worked there,” she said. “It was a big surprise to get a letter stating the city was going to revoke our license, because we had been waiting for someone to tell us that spice had been banned in Tooele.”

She added, “I know in Salt Lake County they made a big announcement that spice and potpourri would be banned in the whole county, and in Tooele, we wondered when it would be banned.”

Smokes 4 Less owner Adil Alhamdani, of Draper, appealed the revocation on Nov. 30, 2012, stating that Tooele City hadn’t proven the chemicals found in the spice were illegal to sell. An appeal hearing was held Jan. 15.

“We went through the testing process and got back positive tests that showed Smokes 4 Less had sold illegal substances,” Dunlavy said. “They had a right to appeal, which they did, so we had an appeal hearing. [Tooele City Attorney] Roger [Baker] prepared the appeal process for the city, and presented 58 documents that revealed what the officers did, what the city ordinances were and how the business violated those. We showed exactly what elements of violation were met.”

After the appeal hearing and three weeks of deliberation, the city’s hearing officer, Frank Mohlman, upheld the revocation on Feb. 13, Dunlavy said. Smokes 4 Less appealed the decision to the 3rd District Court. The court will review the evidence provided to Mohlman to see if it supported his decision. The review hearing has been set for May 17.

Smokes 4 Less also filed a motion to stay the city’s enforcement pending the review. However, the court decided to deny the motion.

Although Shaw was disappointed to lose her job at the smoke shop, she said she’s found a silver lining. She, along with three other former Smokes 4 Less employees, will continue to work in the same shop, under the name One Stop Shop. But this time, Shaw will be the shop’s owner and manager, and it won’t be a smoke shop.

“There were three other employees who were very faithful there, so I got together with them and talked about it, and I bought the shop from the old owner and I’m going to turn it into a [convenience] store,” she said. “It’s too much of a gray area to try to open a smoke shop somewhere. There are too many things you can sell that could be bad and the wrong crowd comes in. This new store will be a friendly place.”

Shaw said the new store will hopefully be opening within the next three weeks, after Tooele City completes an inspection and grants her a business license. Baker said rules that apply to every business in town will apply to Shaw’s store.

“Because she’s changing the use of the building from a smoke shop to a convenience store, the building department will have to determine if any changes to the structure are necessary,” Baker said. “The building code will decide if anything needs to be done. That’s what’s being examined right now.”

The store will sell things like ice, soda, milk, Dippin’ Dots, sandwiches and other snack items. Although the store will sell cigarettes, Shaw said no other smoke shop-type products will be sold. In addition, beer will not be sold at the store.

“It’ll be a friendly place,” she said. “We had so many people that loved us there when it was Smokes 4 Less, and we hope to bring back our old customers. And I hope to be the only place in Tooele that has Dippin’ Dots for sale.”

Although Smokes 4 Less is the only smoke shop that’s been shut down in Tooele City, LA Smoke Shop’s two locations have also had their business licenses revoked for similar violations, Dunlavy said. LA Smoke Shop appealed the revocations on March 4. The appeal hearing has not yet been scheduled, but Dunlavy said he expects it to be scheduled within the next two weeks.

“We are currently in the process of going through an appeal hearing with LA Smoke Shop,” Dunlavy said. “We have put them on notice because they sold illegal substances. Our hope is at the end of this process, they will also be put out of business. We can’t preclude legitimate businesses for doing their business, and we encourage that, but we’ll always do what we can to stop illegal activity.”

Tooele City only has one other smoke shop, Smokin Joe’s, located at 241 N. Main St. This smoke shop has not had any violations, nor has it sold any illegal substances to undercover officers, Dunlavy said.

“The one shop that’s still open complied with the law,” he said. “It’s really pretty simple. That’s all we ask.”

A Tooele City ordinance passed in January 2012 prohibits smoke shops within 1,500 feet of churches, schools, parks and homes. The three stores were grandfathered in when the ordinance passed because they were all located near at least one of these prohibited locations. Once all the revocations are finalized, smoke shops will not be allowed at these locations again.

“All these businesses were grandfathered in under the previous law, knowing if they sold spice it would create a nuisance,” said Tooele City Councilman Scott Wardle. “If a license is revoked and they wanted to reopen their doors, they would have to be located within the city’s industrial area [Ninigret Depot] or meet the zoning requirements within the city, but there’s no development that allows for that currently.”

“There was a period of time where we were starting to get calls from people about people who were under the influence of spice,” Dunlavy said. “It became a situation where it was something we had to react to because it’s illegal. We got to the point where the smoke shops were not in the community’s best interest. It also started to create a significant workload for the police department in dealing with these people.”

Kirby said spice is a very dangerous drug that causes people to act unpredictable, and is especially popular among young people.

“A lot of people that want to use this are kids or teens,” he said. “They have no idea what they’re taking. These chemicals are made by people who don’t care about the effects. It’s a legislative issue every year both in the state and nationally because the chemical structure keeps changing. Hopefully someday there will be a legislative solution to it. It’s dangerous stuff that creates violent behavior and it’s very unpredictable. It’s not a secret to anyone that this is dangerous, especially to business owners.”

Overall, Dunlavy said he wants businesses to know that illegal activity will not be tolerated within the city.

“The message needs to be sent that we’ll be aggressive and we’re not allowing this type of activity in the city,” he said.