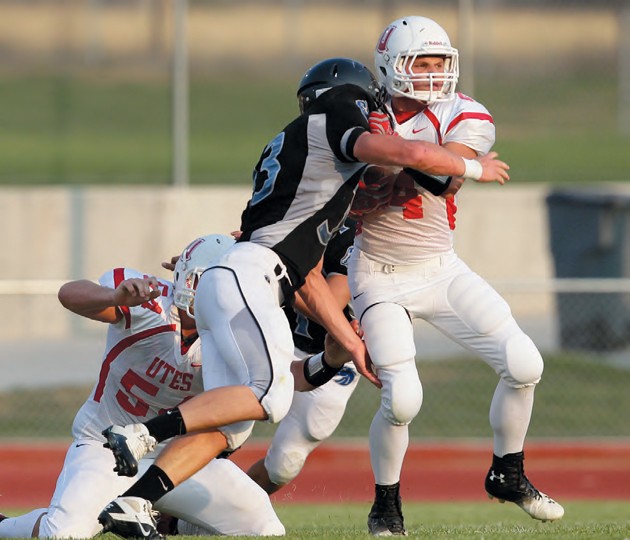 Stansbury High School linebacker Colton May tackles a Uintah player Aug. 17. May signed a letter of commitment to play for Dixie State University when he returns from his LDS mission.

The area’s top senior football players from the 2012 season made commitments to play the sport in college.

Staley will be the only one who will play immediately, as Cloward and May both decided to serve religious missions for The Church of Jesus Christ of Latter-day Saints. The LDS church changed its mission age limit in October, which allows for 18 year olds to serve.

Stansbury football coach Clint Christiansen said he thinks Staley will go in and have an immediate impact on Benedictine’s program. “I think Chandler will get some playing time,” he said. “They’re really high on him. It will be exciting to see how that plays out for him.”

Benedictine College is currently a member school of the National Association of Intercollegiate Athletics and competes in the Heart of America Athletic Conference. In 2012, Benedictine went 7-4 and finished in fifth place in its conference.

Staley tallied 59 total tackles, including three tackles for loss, last season for the Stansbury Stallions on defense, and he rushed for 291 yards on 30 carries and five touchdowns on offense.

Cloward signed a national letter of intent and will receive a scholarship from Dixie State when he returns from his LDS mission.

Grantsville football coach Tony Cloward, Skyler’s father, said Dixie State was among a few schools that wanted Skyler, but Dixie State was the only one willing to have a scholarship waiting upon his return.

Tony Cloward said Skyler wanted to know right away where he would be playing college football, so he signed with Dixie State because of the guaranteed scholarship. Skyler signed the letter of intent to play at Dixie State on Feb. 5.

Skyler tallied 88 total tackles for the Grantsville Cowboys during the 2012 season with three tackles for loss. He also broke through the line for 6 1/2 sacks.

May also committed to Dixie State and signed a letter of commitment, which essentially says May will play at the school when he returns from his LDS mission. He led the Stallions in tackles during 2012 with 126 total and three of those being tackles for loss.

Stansbury also had one early college commitment as Allan Havili, who will be a senior for the Stallions next season, made a verbal commitment to play at the University of Utah.

“He had four early offers,” Christiansen said of Havili’s verbal commitment. “The Utah coaches like him a lot, and he spends a lot of time up there in the offseason. He works hard in the weight room, and I think he’s going to have a great career at Utah.”

Havili had 55 total tackles and two sacks last season as a junior.