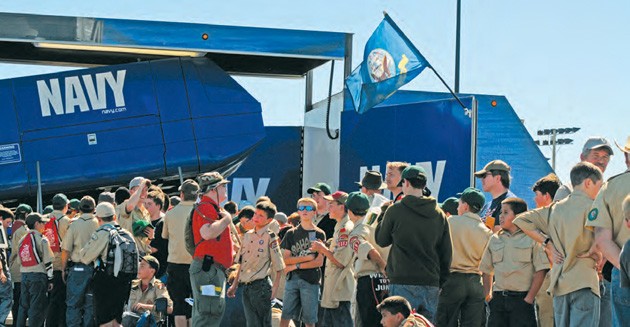 A crowd of Boy Scouts wait to try out a Navy flight simulator at a Boy Scout Jamborall at Deseret Peak Complex in 2010. A group of scouts will be fundraising this year to earn enough to attend the next National Boy Scout Jamboree in June 2013 in Washington D.C.

The first Boy Scouts of America National Jamboree was scheduled to be held in Washington, D.C., in 1935 to celebrate the 25th anniversary of scouting in America, but it was canceled because of a polio outbreak in Washington, D.C. When the first jamboree was finally held in 1937, the opening campfire was lit with flint and steel and the wood used to keep the fire going was brought by scout troops from 48 states. There were roughly 27,000 Boy Scouts who camped on the National Mall under the Washington Monument.

Since then, 16 jamborees have been held — one every four years — and already, two local Boy Scout troops are gearing up to attend the next jamboree in July 2013. The two troops, the newly-formed Deseret Peak District jamboree troop and the Salt Lake City-based special needs troop, are both recruiting Boy Scouts.

“A lot of boys look forward to the high adventure stuff — whitewater rafting, repelling and ziplining,” Egelund said. “A lot of them are also looking forward to leaving their families. They want to show that they are mature and old enough to sort of be out by themselves.” In the forests of West Virginia is the new, permanent home of the National Scout Jamboree. The Jamboree will now always be held on 10,600 acres of property called The Summit Bechtel Family National Scout Reserve. Programs at the National Jamboree include things like competition archery, hiking, kayaking, photography and scuba diving.

Merit badges will also be awarded during the jamboree. “Many of the things we will be working on for preparing for the National Jamboree will help the scouts with their merit badges and advancing in their scouting,” said Egelund.

Egelund said his troop is looking forward to their plans plan to see a number of different historical sites before attending the jamboree. “A lot of the boys look forward to the pre-jamboree tour,” he said. “We’ll go and see a number of places between New York and Washington, D.C., like Ground Zero, Times Square and Gettysburg. We’ll be in Gettysburg one week after the 150th anniversary.” The Deseret Peak District jamboree troop plans on leaving seven days before the start of the National Jamboree on July 8, 2013.

“The boys will be scouts from all across Tooele County, so we’ll have a lot of team building activities to prepare because they might not all know each other,” said Egelund. Registration for the National Jamboree began in 2011, but scouts can still register.

“Boys often will only get one chance to take this opportunity, because it only happens every four years and because they have to be the right age,” said Egelund. Scouts must be 12 years of age by July 15, 2013, or must be an 11-year-old that has graduated the sixth grade. Scouts also can’t turn 18 before the last day of the National Jamboree, July 24, 2013. However, special needs Boy Scouts are invited to attend no matter their age. The registration fee is about $3,000.

“The boys will do a lot of fundraising so that way their parents aren’t paying all of it,” said Egelund. “It’s not too late, but there is a sense of urgency. We need to recruit as many boys as we need to start preparing and to get a commitment. We think the troop will fill up in two or three weeks.”

For more information on registering and attending contact Egelund at 840-1010.