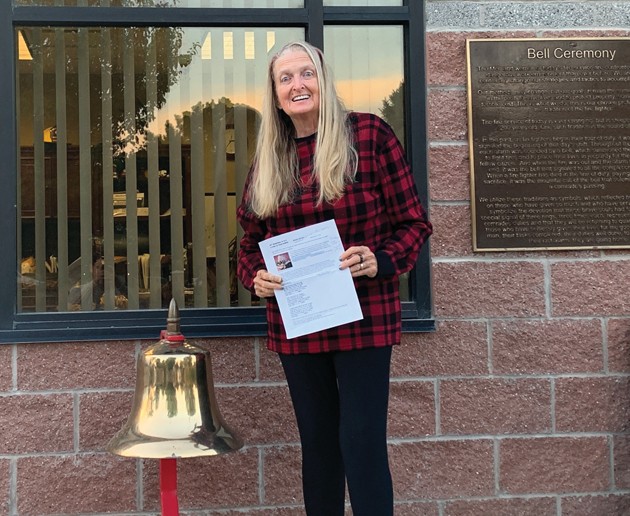 Stansbury Park resident Mary Coates Huddleston stands in front of the North Tooele Fire Department in Stansbury Park on Saturday morning with the song she wrote about 9/11.

Stansbury Park resident Margo Coates Huddleston wrote a song shortly after the events of 9/11 to honor those lost during the terrorist attack.

“I was practicing music in a church one year after the events and I looked out the front door and observed about 20 or 25 police and firemen, and other community members rehearsing for the first-year memorial service for the next day,” Huddleston explained. “I was moved to tears.”

After observing the rehearsal of what the memorial that would be held the next day, Huddleston picked up her guitar and wrote her song, which she calls a “prayer song,” because the words flowed from her with no effort.

“I literally got on my knees in overwhelming shock,” she said after finishing the song.

The first verse of the song reads, “My sister walked with me. My mother prayed for me. My brother died for me. They choose not to go along. In honor of them, let’s roll. And sing amen,” symbolize the individuals lost during the terrorist attacks but the words “let’s roll” are special, according to Huddleston.

During 9/11, United Airlines Flight 93 was hijacked by four terrorists wanting to crash into the U.S. Capitol Building, but passengers and crew members fought for that not to happen. They ultimately were able to stop the attack on the Capitol and their plane crashed into a field in Pennsylvania.

Huddleston believes this moment in history was significant and wanted to include something about it in her song.

The song includes a 12-string guitar, chimes, and fire bells throughout the song.

At the end, there are angelic sounds symbolizing souls lost during 9/11 being taken up to heaven, according to Huddleston.

Those interested in listening to the copyrighted song can email Huddleston at MargoHuddleston@gmail.com.

“Every day is precious,” Huddleston said. “Don’t take it for granted. Take nothing for granted and count your blessings.”