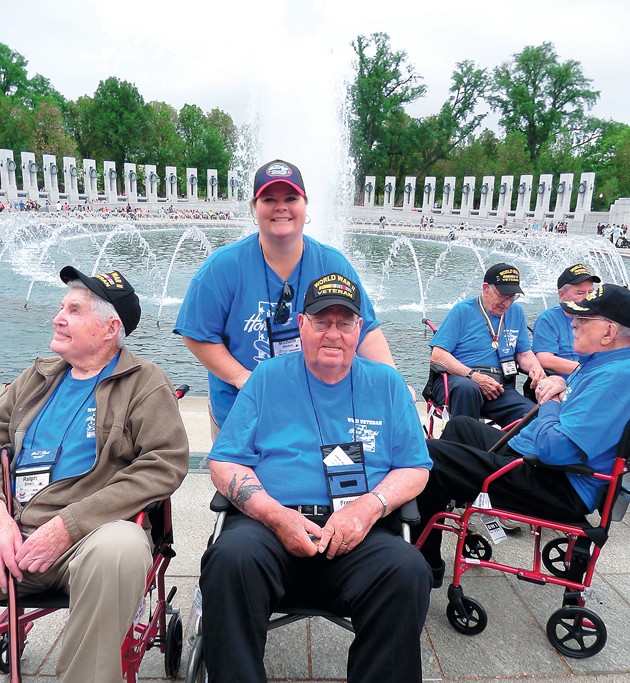 Over 70 years ago, Francis Steele took a train ride across the country, before departing for Europe on a luxury cruise ship converted into a troop transport. The year was 1944 and an 18-year-old Steele was bound for the European theater of World War II.

This past weekend he took another long trip — this time by plane — to Washington, D.C. He was one of 52 World War II veterans who were given free airfare, food and lodging through the Utah Honor Flight, a non-profit organization. Each veteran was accompanied by a guardian, who paid $90 for airfare. Steele, 89, brought his daughter, Michelle Nielson.

“It was a once in a lifetime thing and I’m glad my dad was able to go,” she said.

The trip, which ran May 7 to May 9, was an opportunity for Utah veterans to visit various monuments and memorials in the nation’s capital. Steele said the trip was a lot better than the one that took him to war more than seven decades prior.

It was a whirlwind three-day visit for the veterans and their guardians, stopping at eight different capital landmarks, including the World War II Memorial, Arlington National Cemetery and the Iwo Jima Memorial. Steele said the veterans would unload from a bus, spend time at each monument and then board the buses again.

“The World War II Memorial was in my estimation the best of them all,” he said. “It was really outstanding.”

Nielson said her father had wanted to see the memorial since it was announced it would be built.

“It was very special for him to see it,” she said.

The trip also included a banquet to honor the veterans at the hotel where they stayed and a welcome home celebration on the return flight home. To mark the 70th anniversary of V-E day on May 8, vintage World War II airplanes flew over the Lincoln Memorial and the Potomac River.

According to the Utah Honor Flight’s website, priority is given to World War II veterans. Wheelchairs, oxygen and any other accommodations are provided for the veterans on their trip by the non-profit.

Steele said he was one of the younger veterans to make the trip. Some of the veterans were as old as 98 years old, he said.

Steele was one of the youngest ones to join the war effort when he was drafted into the Army as an 18-year-old infantryman in 1944. He was working for a rancher near Garrison, Millard County, when he received the letter he had been drafted in November 1943.

After boot camp in California, Steele was sent across the Atlantic to England, before crossing the English Channel into France. Once in France, he traveled through to Belgium before fighting in the Battle of the Bulge, a massive German offensive that began in December 1944.

As the battle ended, Steele stayed in Schmidt, Germany for a few days before departing for Cologne, Germany. In a cow pasture outside the city, Steele and another infantryman used a bazooka to shoot the tread off a German tank.

Moments after disabling the tank, a mortar shell hit about 20 feet in front of Steele. He was hit by 86 pieces of shrapnel, including his head, chest and hands.

Steele said he was administered four shots of novocaine to calm him down as they removed the shrapnel. He said he ran over a mile to reach a medic’s tent and a nurse had to use tweezers and a scalpel to remove every piece of the debris across the entire front of his body.

“She’d grab ahold of the metal and cut it off and drop it in a bucket,” Steele said. “You could hear it go ‘clunk.’”

After he was patched up in the field, Steele was transported to Belgium for a few days, then he was flown to Shetland, England where he stayed in a hospital for eight months. One particularly large piece of shrapnel lodged in his hand between his index finger and thumb required two surgeries, he said.

Steele said serving in the war wasn’t a negative experience, despite participating in one of its largest battles and receiving significant injuries.

“Over and all, it was a real good experience,” he said. “I didn’t get hit real bad and I could still do whatever I wanted to with my hand.”

Following his release from the hospital, Steele served with the military police for one year before returning to the United States. He was honorably discharged from the Army in 1946.

Steele said he moved to Tooele in 1948 and worked at Tooele Army Depot until his retirement. He has been married to his wife, LaRona Steele, for 62 years.

Steele is a lifetime member of Disabled American Veterans, Veterans of Foreign Wars and the American Legion. He also served as the state commander for the DAV for a number of years.

The opportunity to see the monuments in Washington, D.C., especially the World War II Memorial, through the Utah Honor Flight was a great experience, Steele said.

“It was a really nice trip,” he said. “I really enjoyed it, very much.”