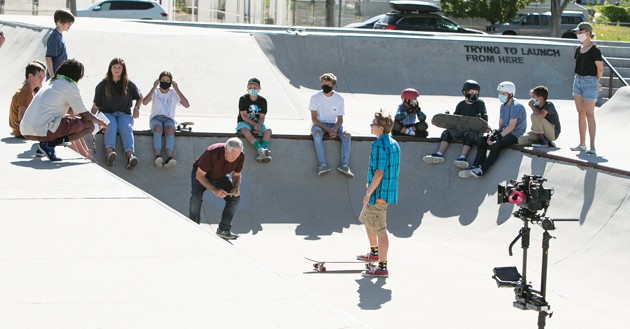 “Grandpa’s Crazy?” shoots a skating scene at a skate park in Tooele City.

Over 500 cast members, friends, and family gathered in the Tooele High School auditorium on Thursday night at 7 p.m. to witness the first screening of the “Grandpa’s Crazy?”

“Grandpa’s Crazy?” is a movie about an elderly man who recently lost his wife. He befriends children at a skatepark. The movie was produced by Dave Bresnahan, a Tooele resident and filmed in Tooele.

Gramps’ kids refuse to make time for him anymore after their mother dies, so he devises a plan to force them to pay attention to him by pretending like he’s senile.

During all of this, Gramps makes friends with troubled children and teens at the local skatepark where his grandson is learning to skateboard.

Gramps’ son Rob takes away his vehicles, because he thinks he’s too senile to drive, but gramps still makes it to the skatepark on his riding lawnmower to provide support to the struggling children and help them film Youtube videos of them skateboarding.

The film ends with reconciliation between Gramps and his kids, and teaches the audience many lessons.

Tooele City Mayor Debbie Winn made a guest appearance in the film.

“My hope is that people of all ages will enjoy watching our film and find characters and situations that they can identify with,” Bresnahan told the Transcript after the screening. “Our film is purposely designed to address social issues without preaching about those issues. We show elderly loneliness, teen suicidal thoughts, parent and teen conflicts, foster parenting, adoption of older children, reconciliation, and more. We want the story to linger in the viewer’s mind and cause them to think and evaluate their own life. We can all learn from Gramps, Scab, R.J, and Jake. My goal is to make family friendly films that everyone can enjoy without concern about what little ones might hear or see.”

Filming for the movie began in late summer 2020 and finished in October.

The movie was filmed almost exclusively in Tooele with a few scenes shot in Lehi and will premier next year either at the Sundance Film Festival or after.

As soon as word is received about the Sundance Festival, it will be posted on the movie’s Facebook page called “Grandpa’s Crazy Feature Film.”

Those interested in viewing the trailer can visit imdb.com and search “Grandpa’s Crazy?”