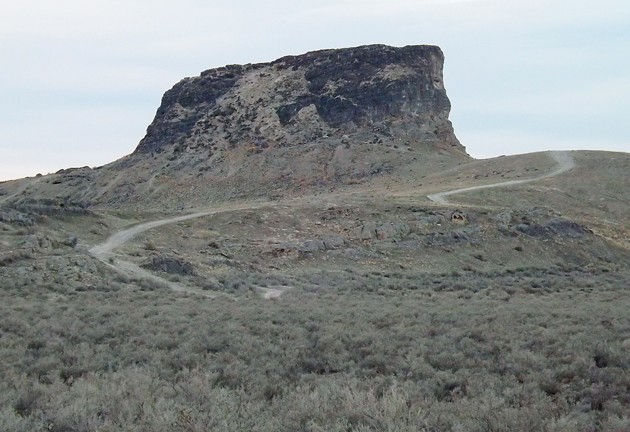 Lone Rock is a great place for a hike — from walking around the rock to climbing to the top to enjoy the vista.

March 17, 2016
Lone Rock is a place to explore and ponder the distant past

One of the most familiar sites in Tooele County is “Lone Rock” at the northern end of Skull Valley. This rock outcrop, which seems to float on the valley floor like an old battleship, is a fascinating place to explore and ponder the past.

Unfortunately, it’s also an example of how places can be overused and even abused by the public that claims to love a place, but actually loves it to death. Hopefully, through education, we can take better care of our natural resources. Lone Rock is worthy of being treated well.

Lone Rock rises 250 feet above the sagebrush flat of Skull Valley. The highest point is 4,485 feet high while the southern leg reaches an elevation of 4,310 feet, which is 75 feet higher than the surrounding terrain.

When viewed from the south, Lone Rock appears to be a large plug of rock that is primarily gray limestone covered in areas with a crust of white conglomerate and sedimentary rock that was deposited by Lake Bonneville’s receding waters long ago. The north, east and west aspects are different, consisting of 100 foot-high sheer cliffs.

Lone Rock is accessed by traveling west on Interstate 80 to Exit 77 for Dugway and Rowley. Turn left, drive under the bridge and go south on SR-196 — or Skull Valley Highway — for approximately 3.3 miles. A sign on the right side of the road announces the turn for Lone Rock. You will see the rock grow larger as you approach it from the north. Unless the fog is thick in the winter or the snow is blowing hard, you cannot miss it.

At the turnoff from SR-196 there is a signboard that is littered with over a half dozen papers tacked to it that speak of restrictions and limitations on area use. When I first saw the board I thought it was overkill, but then I walked the land and realized the Bureau of Land Management is fighting a losing battle to get recreationalists to respect the land.

The access road heads west toward the rock and reaches the southern end of it in about seven-tenths of a mile. The road can be nasty if there is any precipitation. But the rock is not far away at this point, so if you can’t drive to it, you can walk.

The access road passes over the southern tip of the rock and then winds north along the back side and climbs to a perch at the base of the cliffs via a steep, rough road. This is where I usually park my truck when I visit Lone Rock. On my latest visit, I was saddened to see a fire ring here that was not dispersed, plus several boards, a sheet of plywood and garbage.

I parked my truck and followed a well-defined foot path that leads west up the south face of the rock. This little trail soon disappears and it is a four-limb climb from that point to the top of the rock.

Along this stretch there are mounds of white chalky rock that adhere to the gray limestone, which make the geology of the place odd. You have to be careful here because I have seen large snake skins, which means snakes like this area.

On top of the rock it is nearly flat as an anvil with a few low ridges of limestone that have little patches of grass at their bases, which make an excellent place for a picnic. Be careful and stay away from the cliff edges because unexpected winds could sweep you over and the fall would be fatal. The view from the top is superb. Even though you are only 250 feet above the plain, you have a good vantage point from which to see the Lakeside Mountains and Stansbury Island to the north and the Cedar Mountains across Skull Valley to the west.

To the east is the Burnt Springs Ridge area of the Stansbury Mountains where the wave cut of Lake Bonneville is evident hundreds of feet above the valley floor. To the southeast the snow-capped peaks of the high Stansbury Range dominate the scene and to the south Skull Valley stretches off to infinity. While there you also have a birdseye view of the 4X4 roads and trails that criss-cross the area.

The summit encourages further investigation. Lone Rock’s gray limestone cap looks like it was repeatedly slashed with a saber while it was wet like cement and then froze into what it is today. There are splotches of bright orange lichens everywhere and lime green and dark yellow lichens as well.

Several types of furry and fuzzy mosses cling to the rocks in shadowed places, and in one area I found a nice fossil imbedded in the limestone that was over 6 inches long and about 1.5 inches wide.

If you visit Lone Rock, take a sack lunch to the top and look west across the mud flats and salt plain towards the Cedar Mountains. Many early travelers gazed upon a similar scene and realized they would have to divert south to the area of Iosepa before they could reasonably cross Skull Valley and continue west.

John C. Fremont, Jedidiah Smith, the Donner Party and Capt. Howard Stansbury are just a few of the explorers and emigrants who passed by this rock — and no doubt used it as a marker. Capt. Stansbury even commented in his notes that he believed he could hold off any number of Indians from the rock if he found it necessary to occupy Lone Rock for defense purposes.

Lone Rock today is a popular place because it is so accessible to 4X4 enthusiasts, target shooters, campers and hikers. I noticed at least five separate groups of Boy Scouts pitching tents and setting up camp. As I descended the rock after watching a sunset over the Cedar Mountains, a few excited scouts passed me heading up. It reminded me of the dozens of scout camps I went on en route to my Eagle award. I was glad the boys have the opportunity to go out on adventures in our county.

If you visit Lone Rock, please be respectful of the environment and those who will follow you. If you go shooting, pick up your target materials and spent casings. If you camp, leave your campsite in better condition than you found it. If you can, clean up trash left by abusers.