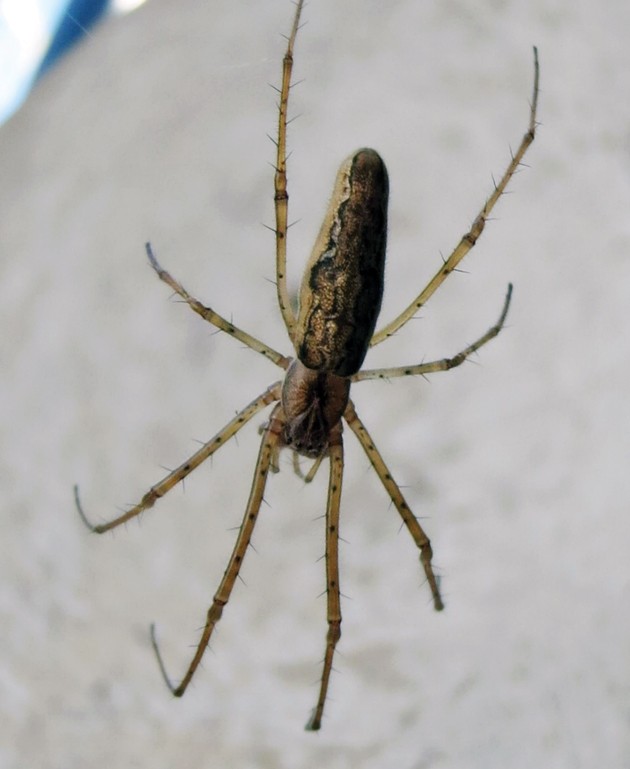 A long-jawed orb weaver elegantly poses on its web near Settlement Canyon Reservoir. This spider was photographed and left unharmed.

Belonging to the family of “Tetragnathidae” known as long-jawed orb weavers, this species of spider is recognized for its slim abdomen, long legs, and depending on the species, their abnormally large mouthparts. Long-jawed orb weaving spiders are known for using their slender physiques to conceal themselves amongst vegetation. They do so by aligning and flattening themselves against thin plants in an attempt to hide from predators. Plants may include flower stems, twigs, reeds, and blades of grass.

Long-jawed orb weaving spiders are primarily found in woodlands, marshes and meadows. They commonly inhabit nearby water so they can build webs over streamlets, ponds or calm-watered areas. Because of this, long-jawed orb weavers usually have to reconstruct their webs on a daily basis. They are also known to eat their own webs and move to different destinations if insects become scarce.

Long-jawed orb weavers feed on smaller insects and patiently watch for captured prey from the center of their webs or from a nearby plant. Sexually matured males tend to loiter and feed from another female’s web.

Though some species of long-jawed orb weavers possess intimidating large fangs, these spiders are hardly known to bite humans and their bites are not dangerous. Long-jawed orb weavers are polygamous and both genders will mate with as many spouses as possible during the mating season.

Taylor Lindsay is a writer and photographer of wildlife creatures big and small. She can be reached at CritterChatter@Live.com.