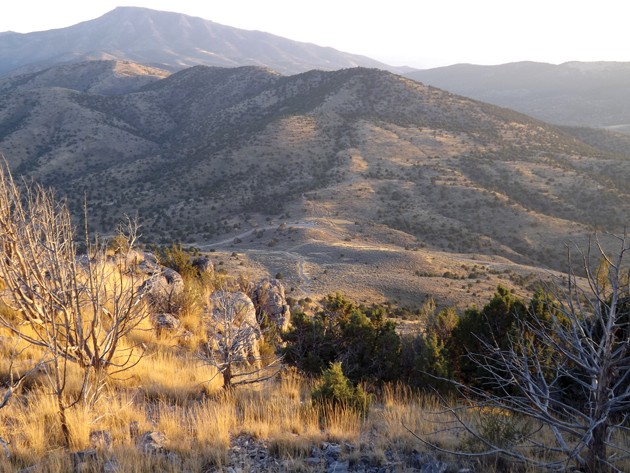 Local legend tells of a story in which Lookout Pass got its name from a Pony Express Trail rider who escaped an ambush by American Indians while crossing the pass. The Pony Express Trail is visible in the center of the above photograph.

February 9, 2017
Lookout Pass on the Pony Express Trail offers a glimpse into the desert’s past

“But the West of the old times, with its strong characters, its stern battles and its tremendous stretches of loneliness, can never be blotted from my mind.”

As we continue westward on the Pony Express Trail, we come to Lookout Pass, one of my favorite spots on the trail for exploring.

Lookout Pass is located roughly 8.4 miles west of state Route 36 where the Onaqui Mountains end and the Sheeprock Mountains begin. The summit elevation is 6,192 feet and there is an old picnic table, trail register and gravel parking area at the pass.

From this point, you get your first glimpse of what was known as the Great American Desert in the 1860s. I like to take a moment each time I visit and look at the many ranges of mountains to the west, and consider what a challenge and test of courage it must have been for the early explorers like Howard Egan, Chorpenning and Simpson to embark upon the great adventure of crossing this desert.

On Sept. 28, 1860, Sir Richard Burton traveled over the pass on the Overland Stage and described it this way:

“Ensued a rough divide, stony and dusty, with cahues and pitch holes: it is known by the name of General Johnston’s Pass. The hills above it are grey and bald headed, a few bristles of black cedar protruding from their breasts, and the land wears and uninhabitable look.”

Today, the trail through the mountains is quite different. It is an improved, gravel road that most cars can negotiate, not the rutted, rocky road it was in the time of the Pony Express and Overland Stage. The mountains, however, have not changed much as they are cloaked thickly in places with Utah Juniper, but in other places they are bald due to frequent range fires.

Cap. James H. Simpson named the pass in honor of his commanding officer in 1858 when he determined it would be suitable for wagon travel. Froiseth’s 1875 Map of Utah lists the place as “General Johnston’s Pass” as well. That name has since faded from maps and the name “Lookout” has endured.

Why is it called Lookout Pass? One legend states the name is derived from a west-bound Pony Express rider who narrowly escaped an American Indian ambush in the canyon. When he passed the east-bound rider, he warned him to “Look out” as the Indians would be waiting for him on the pass.

Whatever the source of the name, Lookout Pass is a great place to explore. From the pass, you can hike the steep, 7,214 foot-high Black Mountain to the north. I call it Black Mountain because when viewed from the west it is covered from bottom to top with dense Utah Junipers.

These junipers, depending on the time of year, can be completely covered like snow with powder blue, marble-sized berries.

The best approach to Black Mountain is to head north across the road from the parking lot at Lookout Pass over a small hill. On the backside of this hill is an old two-track road. Follow it east for about 100 yards and it will charge due north up a slope.

The route is steep and proceeds around a few limestone outcrops, but once you have attained the crest the hard work is done. It is easy going from there along the ridge to the highpoint. The ridge trends almost due north and drops off nearly sheer on the west face. The last mile of the hike to the summit is along a ridge of limestone, the top of which provides views of the West Desert and a mysterious succession of hazy mountain ranges beyond.

I have hiked this mountain in moonlight and at sunset, in summer and in winter. Each season has its own attractions when you are walking the mountain ridges in the desert. You have to be careful, though, because there are prickly pear, bunches of hedgehog cactus, and skeletal remains of burned out junipers that can poke, scrape and snag you.

The limestone is also sharp, so I would recommend good hiking boots and gloves to prevent getting cut on the rocks. The limestone is also interesting with splotches of large orange lichen patterns, occasional streaks of white quartz and horn corral fossils of various shapes. From the edge of the cliff shelf you have a perfect perch to observe a Pony Express Station site 1,300 feet below.

Once you complete the hike to Black Mountain, take a moment on Lookout Pass to consider a silver plaque set in a boulder that commemorates Ray E. Staley 1920-1993. According to the plaque, Staley was a sheepman and livestock industry leader who helped establish the West Desert sheep trail.

While researching Staley and the plaque, I found the following dissertation by John Frederick Bluth entitled “Confrontation with an Arid Land, The Incursion of Goshiutes and Whites into Utah’s Central West Desert” Brigham Young University 1978.

Bluth’s work covers all aspects of the desert, but what I found interesting was how he described the movement of sheep from the Wasatch Mountains to Lookout Pass by November of each year. The sheep then trailed south to mountain ranges like the Simpsons, Keg, Dugway, House, Confusion, Burbank, and even to Mount Moriah across Snake Valley.

The sheep then turned north and by mid-winter were on the east slopes of the Deep Creek Mountains. By April they would complete the large circuit and head back over Lookout Pass to sheep shearing outfits at Tintic Junction and Cedar Valley. The trail would deviate a bit each year depending on weather and predators.

According to Bluth, the incessant nibbling of sheep and the wheels of the herder’s portable house marked the desert as nothing before. Sheep dogs would bark at the flanks of the herds as they moved along.

I saw a remnant of this activity one spring evening on the eastern flank of the Dugway Range near Fandangle Canyon. There were hundreds, maybe thousands of sheep in the flat, and their baahing filled the desert evening. A lone herder’s hut stood at the edge of the herd and I was greeted by a few not-so-friendly dogs.

Whenever I’m on Lookout Pass, I consider millions of sheep on the desert and wonder how much impact that activity had on the desert’s ecosystem. I also think about the countless hours of blood, sweat and lonely toil the sheepmen must have put into working the silent desert ranges.

Lastly, I ponder the echo of millions of sheep passing through this mountain gap. Just like the sound of hoof beats of Pony Express riders coming over Lookout Pass, it’s all just a memory now.