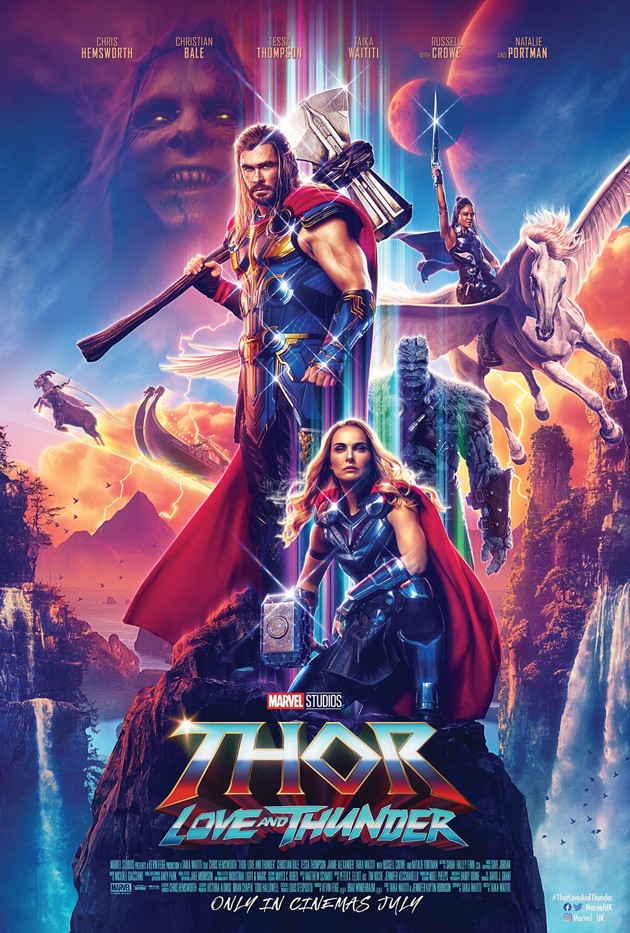 “Thor: Love and Thunder” sees beloved director Taika Waititi — “Hunt for the Wilderpeople” and “Jojo Rabbit” — team back up with the dashing Chris Hemsworth for this follow up to “Thor: Ragnarok.”

There’s been a lot of buzz around the film since the previous “Thor” film was a smashing success with critics and audiences.

However, fans of Thor will likely be disappointed if they’re looking for another film with outstanding comedy and characters like “Ragnarok.”

“Love and Thunder” finds Thor in a not-quite-the-middle-of-his-life crisis teaming up with the Guardians of the Galaxy clan to save the universe.

Saving countless lives just isn’t enough for Thor. He’s looking for a purpose, specifically for someone who will give his life purpose, but his work just keeps piling up.

Meanwhile, gods are disappearing left and right when a new face surfaces, Gorr the God Butcher, portrayed by Christian Bale, who handles a weapon with devastating power and threatens the lives of all gods across the universe.

Thor must stop Gorr before he harms any more of his fellow god friends, and he’ll have to team up with a few familiar faces in order to stand a chance against him.

While “Ragnarok” mixed up the Marvel formula by giving us a completely outlandish yet hilarious story, “Love and Thunder” tries to copy “Ragnarok” in almost every way it can but isn’t nearly as funny.

The film is so convoluted as it tries to weave old storylines and characters into a 2-hour movie, that it forgets to add anything meaningful to the Marvelverse. Because of the convolution, Thor becomes a shade of his former self, where all he’s good for now is looking ridiculous and handsome at the same time.

The reappearance of Thor’s former love interest, Jane Foster, portrayed by Natalie Portman, also didn’t help with the mess. Her character felt like someone who was put on the franchise’s back shelf until, years later, someone found her, dusted her off, and then tried to cover up any plot holes by writing in a 5-minute montage. Her reintroduction wasn’t realistic at all.

Overall, there were so many issues with the characters and the pacing that it made me question whether Marvel knows what they’re doing with their superheroes anymore.

But despite the mess, there are a couple of enjoyable moments in the film. I must admit it had me laughing out loud a couple of times.

Thor’s ridiculousness, though trite at times, does have its moments. There’s also a pair of screaming goats that is sure to bring a laugh.

Aesthetics-wise, when Thor visits Gorr’s world, there’s a black and white sequence which is surprisingly beautiful, yet creepy to look at.

The production value wasn’t as bad as I’ve seen in past Marvel movies — though it’s not particularly great either.

I’m giving “Thor: Love and Thunder” a 5 out of 10. It might be wise to revisit the other “Thor” movies before tackling this one. I can’t guarantee it will solve the confusion, but it might help.

The film is rated PG-13 for intense sequences of sci-fi violence and action, language, some suggestive material, and partial nudity.

This movie is a little raunchier and scarier than past Marvel movies, so keep that in mind if you want to take the kids to it.