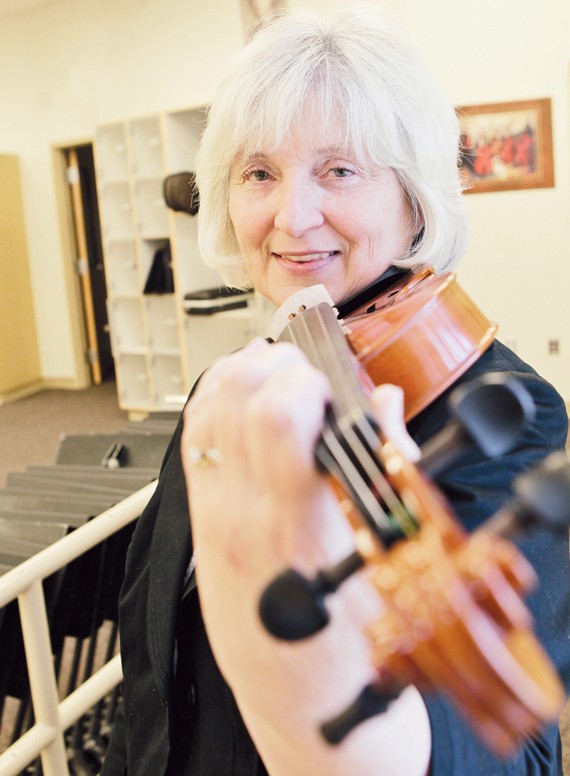 Betta Nash, pioneer of orchestra in Tooele schools, has retired after 25 years of service ♦

For 25 years, Betta Nash, 62, has raised her baton and music has flowed out of stringed instruments in the hands of students throughout the Tooele County School District. This week Nash quietly passed her baton to her successor as she stepped off the stage and retired from teaching.

Music has always been an integral part of Nash’s life. She grew up in a home where her mother played the piano, one brother was a singer and another brother played the violin. Nash also took up the violin as a youth and has never set it down.

“Music enhances life,” said Nash. “It is a way of expression. It is full of emotion and feeling.”

In 1987, Nash and her husband moved to Tooele from Vernal. At that time there was no program for stringed instruments in Tooele’s public schools.

“I wanted my children to have the opportunity to learn to play in an orchestra like I had,” said Nash.

Nash went to a school board meeting and begged them to add a program for stringed instruments.

The school board was responsive to Nash’s request but had one stipulation.

“The school board said they would start up an orchestra program,” said Nash. “But they wanted me to teach it.”

Nash started teaching orchestra at the elementary and junior high schools in Tooele and Grantsville.

“I started out teaching two days a week after school,” said Nash. “The district ran the program as part of the community schools program after school so I didn’t have to be a certified music teacher and they could collect a fee from the students to help pay for the course.”

To this day Nash still loves teaching beginners who are picking up an instrument for the first time.

“There is something magical about watching as a young student picks up an instrument for the first time and somehow connects everything and is able to take notes written in black and white on a page and position their fingers correctly and move the bow just so and somehow pull music out of an instrument,” she said.

Nash taught in the community program after school for five years, gradually building up the number of students in the orchestra program each year.

In 1992, there was enough involvement in the orchestra program in Grantsville and Tooele that the district decided to go full-time with the program.

“It made for a very long day,” said Nash. “Teaching, driving, preparing and trying to raise my family — it was hard.”

In 1997, Nash decided her family needed her at home more than she needed to teach orchestra, and she stepped out of school teaching.

The district had a drama teacher help cover the orchestra classes the first year after Nash left. Then they hired JoAnn Hinkle, who currently teaches orchestra at Tooele High School, to run the stringed instrument program for the district.

However, Nash had a desire to return to teaching, but after 10 years of experience teaching orchestra, Nash had no college degree or teaching certificate.

“I wanted to go back to teaching, but I also wanted to make sure that the students had a good teacher,” said Nash. “I wanted to be prepared to give them what they needed.”

In the fall of 2000, Nash, at the age of 50, enrolled in the music education program at the University of Utah.

In 2003, Nash did her student teaching in Grantsville.

“It was great to be back in school teaching orchestra again,” she said.

Three years after starting at the University of Utah, Nash graduated with a bachelor’s degree in music education.

Retirement was not on Nash’s mind as she started teaching this fall. This school year, Nash has had the opportunity to work with a student teacher, Natalie Ashby, who is one of her former orchestra students.

“I started thinking that I am 62 and I was going to have to stop doing this some time,” said Nash. “But leaving is hard not only for me, but also for the students. Music students are like a family and changing teachers is hard. New teachers do things differently. I was also concerned that when I left, I wanted to make sure that the program would continue in good hands.”

Her student teacher was an impressive teacher and shared Nash’s passion for music. Nash decided that this was the best time to bow out, and she opted to retire at the beginning of the new year.

“You don’t really get to name your successor,” said Charles Mohler, principal at Grantsville Junior High School. “We organized a committee, conducted interviews and her former student came out on the top.”

Even at that, Mohler said Nash will be hard to replace.

“Her dedication to students and music is incredible,” said Mohler.

Nash has built interest in her concerts in both students and parents with some original themes.

Nash recalls a concert with an “Old MacDonald” theme where students wore partial barnyard animal costumes. She has also enjoyed the annual Halloween concert where students would come dressed in costume and did the chicken dance. Nash’s students have also played Christmas carols in the halls at school and played in a rock band at GJHS, performing a “Star Wars” piece arranged by a student.

Over the years, Nash’s students used their talents in high school and local community musical theater productions, including pit orchestras.

Many students of hers have participated in the local, yearly production of Handel’s “Messiah.” Her students have also been heard performing at senior centers, assisted living centers, city halls and local grocery stores.

Nash has taken her students beyond the confines of Tooele County. Junior high students have been bused to Utah Valley University to play in a junior high orchestra festival. Nash has also taken her classes on field trips to Salt Lake City to watch violins being carefully carved at the Violin Making School of America. Her orchestra class has also attended Thursday morning dress rehearsals of the Utah Symphony in Abravanel Hall and they have performed in the rotunda of the state capitol.

Nash said she is grateful for the school district’s commitment to music education.

“Other districts are cutting music programs, especially orchestra,” said Nash. “But our district has been very supportive.”

Music itself not only enhances life, but Nash’s students come away with some pretty good lessons about life as well, according to Nash.

“They learn what it means to be part of something bigger than themselves as they work together to create music which with its harmony becomes something greater than any one instrument,” said Nash. “Teamwork, cooperation and dedication are all important. Orchestra students have a chance to excel at something. They have an opportunity they might not have had without orchestra.”

With her baton firmly in the hands of her successor, Nash is not about to leave the world of music altogether.

“I have grandchildren that live very far away,” said Nash. “I hope retirement will give me an opportunity to visit them more often. If that doesn’t keep me busy enough, maybe I’ll start teaching private lessons.”