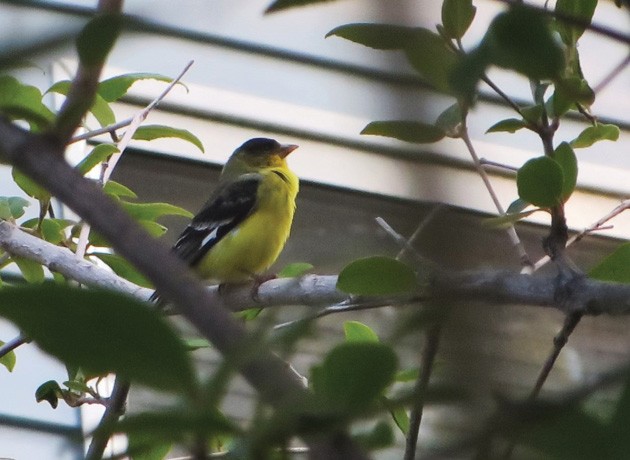 A male American goldfinch perches on a bush in a Tooele County yard.

American goldfinches are most commonly found in open-country areas seeking food. Their diets consist mainly of seeds which are sought commonly from plants such as alder, thistle, dandelion, mullein, sunflowers, teasel and ragweed. Although the American goldfinch will occasionally eat a few insects, they are known for their strict vegetarian diets. Even when American goldfinches feed their offspring, it mostly consists of regurgitated seeds. Only a few insects are given to the young so they may receive enough protein.

American goldfinches are most recognized for the male’s vibrant yellow appearance. The females are blander in appearance and have a brownish-yellow coloration of feathers.

Males possess their bright plumage so they can attract females during mating season. They will first begin singing and aerially pursuing a female, showing off their plumage and fitness as the female evades him. If the female accepts him as a mate, both will fly in wide circles as the male continues to warble a song.

After a male has been accepted and the territory is selected, the female begins the process of a six-day construction of the nest. The male does not assist with the building of the nest. Nests are usually located in the branches of deciduous trees and are built with bark, weeds, milkweed, grass, cattail, spider webs and caterpillar silk. The materials are bound together and are woven together tightly enough that the American goldfinch nest is capable of holding water. This is a risk for nestlings for if left unprotected from rain as they are vulnerable to drowning.

The eggs are incubated 12 to 14 days by the female as she is given food from the male. After hatching and developing quickly, fledglings that soon leave the nest continue to call out for food. For about an additional three weeks, up until the fledglings stop calling out and are independent, the male will continue to locate and feed them by hearkening to their calls.