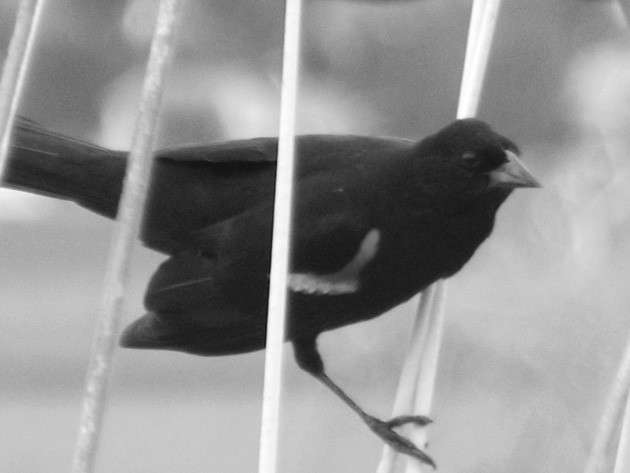 A male red-winged blackbird perches on a cattail located in a marsh above Church Wood Road.

Similar to peacocks, male and female red-winged blackbirds are sexually dimorphic, meaning they differ in characteristics between male and female, such as color and size. Females look like large dark sparrows, possessing a dull brown color with streaks, which allows them to camouflage amongst their nests and remain hidden from predators. Males, however, are sleekly black and are red shouldered, being very attractive in their environment. Sometimes males possess an additional streak of white, pink, or yellow on their red patch.

During their mating season, male red-winged blackbirds will claim dominance over a portion of land, and will chase off other males that intrude their domain. To ward off other males and predators, they are seen habitually perching at the top of reeds, puffing their feathers and shrilling loud distinct calls. Other times, males have been known to get boldly aggressive and will either group together with other males to form mobs or singlehandedly chase or attack predators. This can include not only crows and hawks, but even horses, humans and other large animals.

When seeking mates, the male’s song and feather fluffing is not only intended for warning predators, but it is also to attract females to their territory. They also attempt attracting females by the choice of their domain, due to its size and naturally provided nesting materials. Because red-winged blackbirds are polygynous and can have from two to 15 mates at once, males pick good sized portions of land so they may have multiple mates and nesting sites amongst their territory.

Female red-winged blackbirds construct their nests over water, making it more difficult for predators to pursue or locate, and will build and attach their bowl-like nests to vegetation that can include bull rushes, reeds, or cattails. During the time the females are incubating their eggs or feeding offspring, males continue to stand guard over their territory to keep a look out.