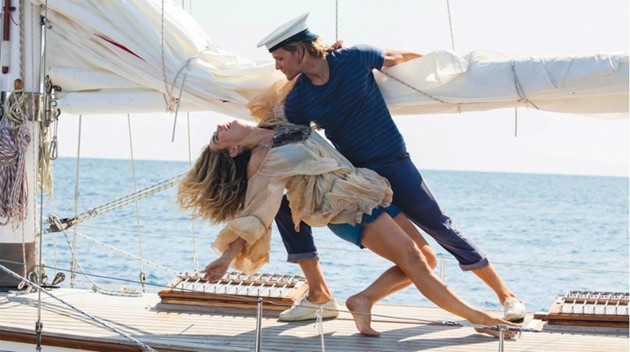 I wasn’t a big fan of the first “Mamma Mia” movie. There are parts where the singing and dancing are enjoyable, but overall, I wasn’t impressed with the film.

So, if you told me that I would love “Mamma Mia! Here we go again” before seeing it, I wouldn’t have believed you. But I’m a believer now, because this movie is truly enjoyable.

The reason? It does something brilliant and tells two stories simultaneously. The first story takes place 10 years after the events of the previous film with Sophie Sheridan (Amanda Seyfried) reopening her mother’s hotel after her death. The second takes place some 30 years ago with her mother, Donna Sheridan (played by Lily James and Meryl Streep), meeting Sophie’s fathers. Both stories could have worked on their own, but there’s something about combining the two that makes this film both smart and entertaining.

We finally get to see the story of how Donna met Sam (Pierce Brosnan and Jeremy Irvine), Bill (Stellan Skarsgård and Josh Dylan), and Harry (Colin Firth and Hugh Skinner). We also get to see how the three have fared since finding out they all have a daughter. It’s this type of parallel storytelling that renews my faith in cinema. The film doesn’t treat its audience like morons, but it also understands that its purpose is to entertain.

The dance numbers are the best part about “Mamma Mia! Here We Go Again.” ABBA’s greatest hits are among the best songs ever written, and when put to well-choreographed dances, they blew me away. I thought the “Waterloo” number with a young Donna and Harry was flawless, and I think it should be used as a model for other musicals. My only wish is that all the songs could have been so impactful. There were a few, particularly the “Fernando” number, that felt a little lazier, but I understand how hard it can be to choreograph so many dances. Also, the transitions from scene to scene were fun and surprising.

Though I loved the movie, it wasn’t perfect. There were a few musical numbers that didn’t hit the mark, and I do think parts of both stories fade into obscurity at certain points. Another weakness is some of the voices aren’t as good as they used to be. Pierce Brosnan’s voice was heavily criticized in the first film, and his singing was severely limited in this film, which was noticeable. Also Cher, who plays Ruby Sheridan (Sophie’s grandmother), has lost a lot of power in her voice.

Despite these few minor problems, I had an enjoyable time. Many people may not like this sequel/prequel because it is a “Mamma Mia” film. Musicals, especially romantic musicals, have gotten a bad rap over the last decade. Recently, “The Greatest Showman” and “La La Land” have softened the hearts of many who don’t like the genre, but I do think there is still work to be done. However, if Hollywood continues making these musicals, I can see them becoming a staple for general audiences.