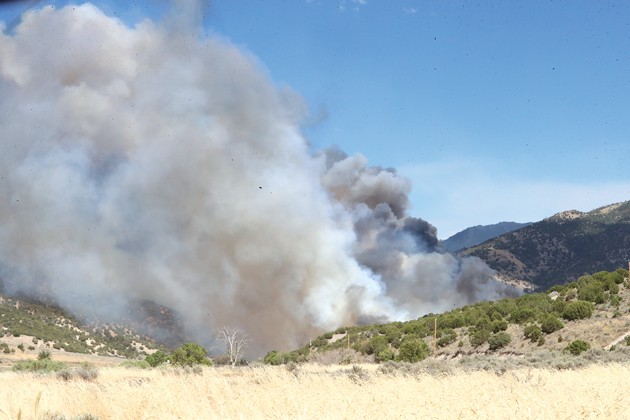 Smoke rises from Soldier Canyon on July 9 three hours after the start of the Jacob City Fire. A man was arrested and charged with two misdemeanor crimes in connection with starting the fire.

The man arrested for starting the Jacob City Fire as a result of a generator explosion has had his first day in court.

Gary Carr appeared before 3rd District Court Judge Theresa Welch in Tooele  on July 18 where he was given a court-appointed attorney and was told he has a pretrial conference scheduled on Sept. 13.

He was given the information on his arrest and was informed of the charges and their penalties.

Stockton Police arrested Gary Carr on Tuesday, July 12, for reckless burning and reckless endangerment, both class A misdemeanors, for his hand in starting the fire.

The reckless endangerment charge was later changed to reckless burning charge, also a class A misdemeanor.

Also, instead of reckless endangerment, Carr now has a charge of causing a catastrophe — recklessly, also a class A misdemeanor.

Carr is not currently in custody.

Carr, a homeless man,  called 911 on July 9 around 2:28 p.m. to report that his generator had caught fire and spread to nearby trees in the area of Jacob City Trail Head, according to a press release by Stockton Police.

Stockton Police, as well as fire investigators with Utah State Department of Natural Resources and the Bureau of Land Management, responded to investigate the cause of the fire.

Burn patterns and other physical evidence at the scene did not match up with Carr’s initial statement, according to the press release.

Stockton Police secured a search warrant to seize Carr’s trailer and generator.They also interviewed witnesses including  firefighters that were first on scene and civilians.

“He admitted that on the afternoon of July 9, he plugged in a circular saw into a recently purchased refurbished ‘like new’ generator,’” the press release read.

“The saw cord had been cut, then spliced and taped back together. During use, the saw got extremely hot, so Carr set it down on the back of the RV, which happened to be next to a sealed gas can. The investigators reported the outside temperature was 103 degrees. Carr then plugged the RV into the generator and went inside,” the press release continues.

Around 10 minutes later, Carr heard a loud pop, followed by hissing noises, according to the press release.

He went outside to find the top of the generator on fire as well as surrounding trees.

Carr attempted to put water on the generator fire, however the gas from the explosion caused the fire to grow.

Carr also attempted to dig the fire out and tossed burning sage and embers under the RV, where another five gallon gas can was located.

“The spreading of burning embers, and the now heated gas can, caused the RV to also catch fire,” the press release stated.

“Negligence does not release a party from responsibility and consequences of an incident that occurs due to his/her action,” officers wrote in the press release. “Members of the public need to be aware of current conditions while recreating on public lands. Special precautions should be taken to prevent wildfires from occurring.”

Stockton Police said residents should be mindful in general when recreating outdoors, especially during fire season, use caution when operating equipment that can create heat or sparks, and when using equipment outdoors, have on hand fire extinguishers, adequate water, and hand tools. These activities should be avoided during peak heat hours.

They should also check equipment for faulty wiring or damage before use, as this has potential to short-circuit, avoid placing recently used tools or equipment next to fuel sources or dry vegetation, and keep fuel stored in a shaded area, away from any potential ignition sources or equipment.

Officers also reminded the public that if a fuel fire occurs, adding water will accelerate the fire. It is important to exercise extra caution when recreating during extreme temperatures, high wind events, and low relative humidity. This is even more important on red flag warning days, according to Stockton Police.