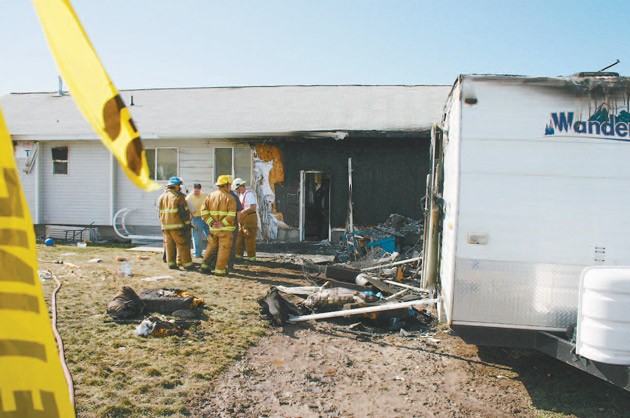 Flames consumed a trailer and the interior of a home at 1222 N. 490 East in Tooele Friday afternoon. A man with a gun wound in his chest was transported to University Hospital from the scene. Police are still investigating circumstances surrounding the incident. photography/Troy Boman

A man was found lying in front of his house as flames from both a house and trailer fire roared behind him Friday afternoon at 1222 N. 490 East, Tooele The incident was reported when three individuals in the vicinity noticed dark smoke and stopped to make sure 911 had been called.

At least 30 firefighters worked to put out two fires — one in the trailer and another in the house. The first was started in the trailer full of four-wheelers and propane gas. By the time the fire was extinguished, the house was pretty charred throughout, according to Assistant Fire Chief Gary Vario of the Tooele Volunteer Fire Department.

The man found lying and wounded at the scene, Chad Ginter, reportedly lived in the home with Amy Spendlove and four children. Spendlove was not at home when the fire started and the children were being babysat at the home of a neighbor. Ginter was taken by medical helicopter to a Salt Lake City hospital.

“What we’ve got, it looks like a self-inflicted gunshot wound,” Tooele Police Chief Ron Kirby said on scene. Although it is early in the investigation, Kirby said they are exploring all options.

Police believe Ginter is in critical condition, although the University Hospital will not release the information.

Dede Sorenson of Pine Canyon was the first to help at the scene. She had dropped her son off at school about 12:15 p.m. and was taking the backroads to the grocery store when she saw the trailer on fire.

“I was driving by to the back side over there and … I was coming around to make sure somebody knew,” said Sorenson.

Sorenson noticed a man lying unconscious in front of the house. She asked him questions from a distance. She noticed lots of children’s toys in the yard and asked the wounded man if more people were inside. She had forgotten her own cell phone.

Moments later, a neighbor across the street came over to see what was going on and claimed to have called 911.

The neighbor allegedly helped move some kids inside, farther from the fire.

Slade Bailey arrived moments after Sorenson. He had been coming around 1000 North with his 5-year-old daughter and saw the billowing smoke. He kept his daughter in the truck, as he didn’t know what to make of the situation. Bailey then called 911 and went over to help. Meanwhile, flames towered over the house and Sorenson and Bailey heard loud popping that they guessed was coming from exploding propane tanks.

Bailey kept talking to Ginter, while trying to stabilize him. By talking to him they kept him conscious until the ambulance arrived.

He appeared to have a large hole in the left side of his chest that Bailey guessed was a gunshot wound.

“He got a gunshot wound in the chest. That’s what it looked like,” said Bailey. “… I don’t know what it was.”

Next on the scene was Jared Stoker who had been going to get some ice cream with his young son. Stoker saw the smoke from blocks away and followed it to make sure everything was OK.

“It was really, really black … It was probably the plaster from the trailer and the siding from the house,” said Stoker.

He brought out blankets from his car to help stabilize the man further. His wife had made several blankets to donate to a hospital in Salt Lake, so he took out some of those and used them.

Stoker described the man as, “in-and-out.”

Sorenson said when she arrived the only burning she saw was from the trailer, but the flames later spread throughout the house. According to Vario, evidence suggests a separate fire was started in the home.

Dispatch paged the fire department to come onto the scene at 12:18 p.m. Engine 21 arrived first. Firemen staked out the area as they didn’t know if a gunman was inside. Lt. David Gillette of the fire department made the decision that the trailer was a lost cause so they went in to try and save the house through the back bedroom window. Vario said no one was found inside.

Then Engines 22 and 20 arrived in the front side and they went in through the front. There were at least 30 firefighters, two pumpers, one ladder and three brush trucks on the scene.

Sorenson and Bailey said Ginter appeared to be in his 30s. They heard reports that his wife came home after the firefighters had everything contained and left again. The kids they heard were at a neighbors across the street being watched.

Ginter and Spendlove were under a mutual restraining order. Spendlove had reportedly filed a paternity action, giving Ginter fathership rights and responsibility for two of the children.

The house next door to the north had some panel melted. Rebecca Evans was at home and heard a loud sound that she thought was a trailer backfiring.

“I didn’t think anything of it until I felt the heat by my sink and that’s when I opened my blinds,” said Rebecca.

According to Sorenson and Bailey, Evans came “screaming out,” thinking her own house was on fire.

“I’m so glad; at first I thought it was on fire, but yeah, it just melted the siding,” said Evans.

At that moment Evans’ parents had stopped at Blockbuster Video by Macey’s on the way to see her and their grandkids. Smith’s wife Carol said when they drove closer and the police wouldn’t let them drive into the area, she took off her slip-on shoes and ran. She called Evans on her cell phone and as soon as she heard her voice she knew something was wrong.

“They wouldn’t let us through, so I took these off and just started running,” Carol said. “I think I was more scared when I pulled up and saw the billowing of the smoke.” When they arrived, Smith said he was impressed by all the community support.

“You see the best in people come out. Some of [Evans’] neighbors came in and were helping take off pictures and put knickknacks in bags,” said Smith.

Evans said she didn’t know Ginter or Spendlove very well. Firefighters used a thermal imaging camera to see if there was any internal damage to Evans’ home. Vario said radiant heat had melted the siding, but there was no structural damage.

“People don’t realize how much of their taxpayer money is spent on a crime scene,” Smith said. “…. It’s when you need it you appreciate it.”