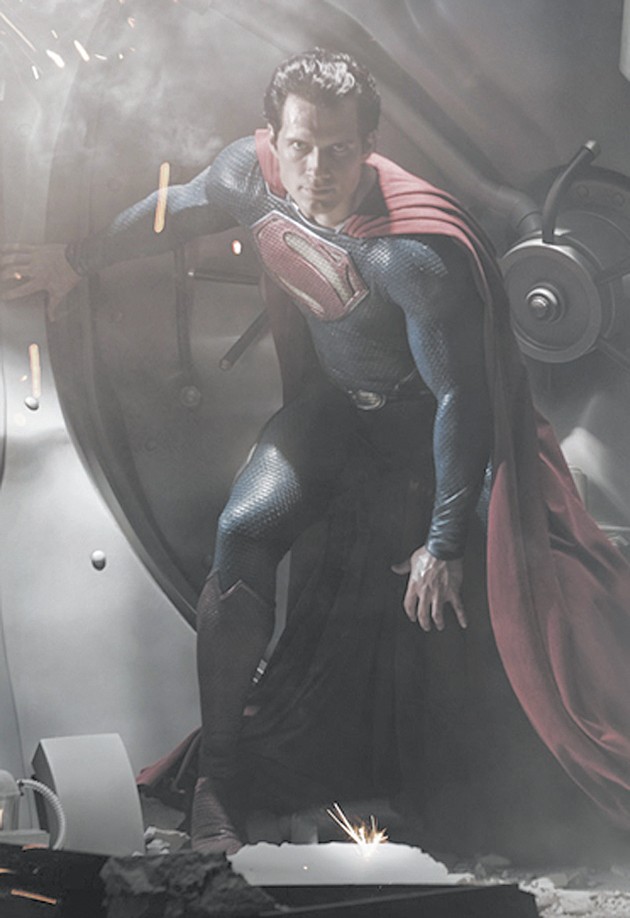 Henry Cavill, as Superman, stars in the film “Man of Steel,” which opens in theaters Friday. courtesy of Warner Bros.

June 13, 2013
‘Man of Steel’ flies into theaters this week with polarizing reviews

The long-awaited, much-advertised reboot to the Superman movie franchise is flying into theaters this weekend.

For anyone not familiar with the premise, Jor-El (Russell Crowe) sends his infant son in a starship far away from the planet Krypton, which is being destroyed. His desperate attempt to save his son — and race — is almost foiled by the rebellious General Zod (Michael Shannon), who kills Jor-El but is stopped and sent to an interdimentional prison with his cohorts shortly before the planet blows up.

Thirty-three years later, that baby has grown up into a Kansas-raised drifter (Henry Cavill), who tries to hide his super strength and invulnerability but frequently fails when others are in trouble. After he discovers a Kryptonian ship near an Arctic military base at which he is employed doing odd jobs, Clark learns more of his true purpose as a symbol for hope for both humans and the deceased Kryptonian race. The ship, and Clark, are also discovered by a reporter, Lois Lane (Amy Adams), who follows his trail of heroic acts until she discovers his true identity, but promises to keep it a secret.

Meanwhile, the destruction of Krypton has allowed General Zod and his fellows to escape, and when Clark finds the ship, he inadvertently advertises his existence to Zod. The escaped Kryptonians come to Earth, and threaten to destroy it unless Clark is handed over to them. Their diabolical plan is, once they have Clark and the restorative DNA his father encoded in his genes, to destroy the human race and reform the planet’s surface to rebuild Krypton and restore their race. Kevin Costner and Diane Lane also star as Jonathan and Martha Kent, with Christopher Meloni as Col. Nathan Hardy and Antje Traue as Faora-Ul, another Kryptonian.

Community News Editor Richard Briggs and I hotly disagreed about the quality of this movie before the critic screening earlier this week — he had high hopes and I expected it to tank — so we both went. Although we came out of the theater mostly on the same page, here are our two takes on director Zack Snyder’s latest take on the symbol of truth, justice and the American Way.

As a huge fanboy of Superman, I went into “Man of Steel” with unrealistic expectations. Going into it with those expectations clouded my judgment for what turned out to be a pretty cool movie.

The fanboy in me needed to see certain things in “Man of Steel” to deem it worthy of my love, and I just didn’t see some of those things. So, yes, I wasn’t thrilled with the end product. Lisa Christensen warned me so many times that it had the potential to be awful, and I should have listened to her. However, it’s still a movie worth going to see in the theaters.

I was worried when Zack Snyder took the helm as director for this project because I hated four of his other movies (“Sucker Punch,” “300,” “Watchmen” and “The Immortals”). And sure enough, he Sucker Punched it.

The plot seemed hurried, but I suppose with the number of alien invasion movies that crowded the box office over the past few years, Snyder felt like we’d get the gist right away. Bad guys are looking for the son of Jor-El, and they find him on Earth being raised as a human.

What I enjoyed about the opening parts of the movie was the way the origin story was written. Instead of taking us step by step through young Clark Kent’s life, the movie shifts right to a 33-year-old Clark (Henry Cavill) working on a ship at sea. Clark’s origin story is told through flashbacks much like in “Batman Begins.” It helped move things along, but then the pacing got uneven.

Snyder made up for this and a horrible Hans Zimmer score with fantastic special effects. The biggest complaint of previous Superman movies and TV shows was the lack of awesome effects. That’s definitely not the problem here. There’s plenty of super cool barbaric fight scenes littered with crazy explosions to put a smile on any pyromaniac’s face.

I didn’t like Michael Shannon as General Zod. Other than Hans Zimmer’s pathetic music, Zod was the worst part of the movie for me. He’s menacing, but his delivery of the character wasn’t as elegant as Terence Stamp in “Superman II.” Shannon had size-13 shoes to fill, and he only filled about a size 7.

Lisa despised Amy Adams’ portrayal of Lois Lane in this movie. I was cautiously optimistic going into the theater, but I came out feeling as she did. Adams dropped some cuss words when she first appears to give off the “tough girl” vibe, but nobody did tough Lois Lane better than Erica Durance in “Smallville.” I can only hope she rebounds for the already-announced “Man of Steel” sequel.

As for the title character: Cavill’s Clark Kent was great. He was the one part of the movie I thought would be awful, but he stepped up and played an amazing Superman. Tom Welling’s Clark Kent in “Smallville” was my favorite portrayal of the character up to this point, but Cavill dethroned him with his performance.

Cavill looked great in the red and blue, and for a British dude, he played an American really well. There was also one shot where Superman is standing with the sun at his back, and it looks like his red and blue suit is made of steel. It was a pleasing visual effect.

We get to see the Superman suit fairly early in the movie (relative to the length of the movie. Get comfortable because the movie is almost two and a half hours long). However, I still felt like there wasn’t enough screen time for Cavill in the red and blue suit.

All in all, the movie was fun, and it jumps you right into the eventual conflict with a fantastic opening sequence on Superman’s homeworld of Krypton.

I’ll admit, I have pretty much hated this since it was announced. Superman just seems to be a really hard character to translate onto film, and most of the time, it sucks. I told this to Richard Briggs repeatedly, and every time he said I was wrong and should stop being so cynical.

And I will say that for the first half hour or so I was trying to figure out if the Colonel’s 11 herbs and spices would make crow edible. Krypton was astonishing, their plight seemed real and Russell Crowe, at once strong, determined but kind and wise, was the best Jor-El yet (sorry, Marlon Brando). Henry Cavill, though he hadn’t once worn anything even sort of red and blue, was actually pretty good.

Then we met Lois. In many ways, it was pretty much downhill from there.

I had been afraid Amy Adams was too cute to be able to portray such a character as Lois Lane, but was open to the possibility that she’d pull an Anne Hathaway and stun us a la Catwoman in “The Dark Knight Rises.” Nope.

“Lois is whiny and incompetent,” I scribbled. “I hate her.”

The rest of the Daily Planet staff, which included Lawrence Fishburn as Perry White, wasn’t much better. As a journalist myself, I tried really hard not to be offended by their portrayal as the staff of what was supposed to be the greatest newspaper in the country.

And Lois and Clark together? I’ve seen more chemistry in a 4th-grader’s baking soda volcano.

Zod was a formidable force on Krypton, but as soon as he got to Earth, his villainy faltered and he was a two-dimensional baddy, as were his followers. Which is not a deal-breaker, if you have other things going on, but here’s the thing: there weren’t that many other things. This is an origin story, I get it, but either make a fuller story or make the movie shorter, guys, come on.

To be fair, some of the movie’s running time was due to lengthy fight scenes, in which things blow up and Kryptonians tossing each other about, usually into buildings and other infrastructure. Which was cool, but it just took so long. And a lot of it was basically the same thing over and over, just with different scenery. Over. And over. And over. After a while it was like watching a six-year-old boy play with a couple of action figures.

In the end, it wasn’t as bad as I was expecting, but in a way that was even worse than it being completely awful. It really could have been as great as Richard was hoping. I’m not angry, “Man of Steel,” I guess I’m just…disappointed.

Cavill is contracted to put on the cape and tights for two more movies if Warner Bros. says so, and I hear they’ve green-lit the sequel already. And that’s fine. He can stay. If they can find a way to write Jor-El back in, that would be good, too.

But Lois needs to be recast asap, like how Katie Holmes was traded for Maggie Gyllenhall in Christopher Nolan’s Batman trilogy and the whole thing got so much better. If they replace her with someone who doesn’t make me roll my eyes and face-palm every time she comes on-screen, I’ll voluntarily watch the next one — and I’ll even overlook the female Jimmy Olson.