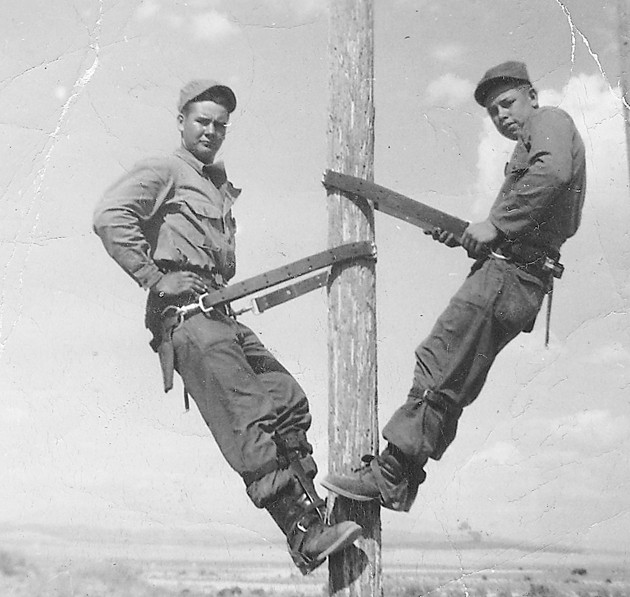 Bill Simpson and Joe Crabtree worked together in Dugway in the 1950s. Simpson now seeks to reconnect with his comrades.

A Michigan man is hoping to reconnect with a group of Army buddies with whom he was stationed at Dugway Proving Ground in the 1950s.

William Simpson was stationed at Dugway from May 1953 to January 1954 as part of the Charlie Company of the 2nd Chemical Weapons Battalion. During that time, he said, he and the other soldiers stationed there were involved with testing various gasses.

“It would be nice to talk to them and see how they’re doing,” he said. “There were about 10 of us who ran around together. I would just like to know if there’s any of them still alive. We were all 17-year-olds who went out there, and it was back in 1953, so you can see how young I was when I was out there.”

Simpson, now 79 and living in Otsego, Michigan, said Dugway, though even today somewhat still shrouded in mystery and military secrets, was a vault when he worked there.

“You had to have a picture of you and your last four numbers of your [Army identification] number to get on that post,” he said. “No civilians could even come on that post. They do now, I see their records now, they let civilians come on there in busloads. But then, you could only get on there if you were stationed there.”

He said the soldiers stationed at Dugway at that time guarded the base and participated in chemical testing at the ground level, as it were.

“They dug a long trench, over a mile long, and then put us down there — there were 480 of us,” Simpson said. “The planes flew about 400 feet in the area at 250 miles per hour, and they told us to take off our gas masks for two seconds, smell it and put it back on and went back to camp.

“What we had to do was tell them what it smelled like,” he added. “We had no clothing — just as I’m dressed right now, pants and shirt. The Army knew it was wrong, but they didn’t do anything about it. That camp [Dugway] is still going, but they wear those suits now.”

Simpson said his group participated in 39 test drops in 1953.

After leaving Dugway, he was transferred to a base in Germany with several others, but gradually lost touch with the Dugway gang. It seems that Dugway, too, forgot about him, he said.

“See, what the Army did was, I told them I was out there on Dugway Proving Ground and they said there was no base there,” said Simpson. “I proved that there was a base there, and then they said I hadn’t been on it.”

He added, “There’s no record of me even being alive from 1953 to 1956. I showed them a picture of me in front of these barracks and I showed them the picture of barracks on Dugway Proving Ground. And they said, ‘well, that could be anywhere,’ and I said, ‘show me one other place that looks like that.’”

Simpson said he found the discrepancy on where he served and when three years ago when he learned he could be eligible for a military pension from a host of health issues — including heart problems, skin cancer and shortness of breath — that he believes his time at Dugway at least contributed to.

“Everybody who was on that post had 13 percent of the chemical of their body. But I was never checked because nine of us were sent to Germany,” he said. “I put in for a pension from them and they disqualified me. That claim’s been open for 30 months. Now I’m waiting for them to disqualify me again.”

Although he has wondered how others have fared since their days stationed in the desert, Simpson said he simply wants to hear from his old friends. At least two, Bill Thompson and Clayton Thompson, have died, he said, but he heard from a third man, Joe Crabtree, last week after Simpson’s daughter found him on the Internet.

“I just want to see if there are any of these guys still alive,” he said.