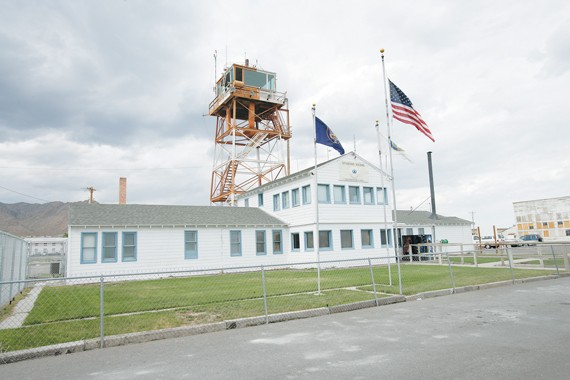 The Wendover Airport is shown in this 2008 file photo. Airport officials say that despite a recent incident at St. George Airport, no new security measures are necessary in Wendover.

The theft and crash of a commercial airplane from the St. George Airport last week has raised concerns about security at the state’s smaller regional airports. At Wendover Airport, which sees more passenger traffic than any of Utah’s other airports save Salt Lake International, the incident hasn’t led to changes in security and the airport remains secure, according to Jim Petersen, the airport’s director.

“The truth is that what happened in St. George could have happened at Salt Lake International almost as easily,” said Petersen. “I think there tends to be a reaction that somehow small airports are more vulnerable. Anybody with a good pair of wire cutters could get into any airport fence in a minute and a half, and they wouldn’t have to throw a rug over the barb wire on top.”

Despite 60,000 passengers coming through each year, the airport has never had a security incident, said Petersen.

“We haven’t really had any problems. We’ve been running the flight program since 2005 and we haven’t had any security problems that would put a plane in jeopardy,” Petersen said. “We feel like we’re pretty secure, really.”

Security measures are thorough and frequently reviewed and changed, he said. Besides the presence of personnel from the Transportation Security Administration, Petersen said, the airport’s own policies include tangibly verifying the authenticity of personnel badges and clearance to areas within and around the airport.

Over the past few weeks, especially, some policies and procedures have been changed, such as how pilots approach the runway, Petersen said, though for reasons wholly independent of the St. George Airport incident last Tuesday. Early that morning, 40-year-old Brian Joseph Hedglin broke into the airport by throwing a rug over the razor-wire fence, stole a plane and crashed into the airport. Hedglin, a SkyWest pilot suspected of killing his former girlfriend in Colorado the week before, died after shooting himself in the plane, and the airport was closed while police investigated the incident.

Petersen said he does not believe shoddy security procedures or the fact that St. George is a smaller airport were at fault for the incident. Still, he said, the Wendover Airport tries to keep ahead of the curve. After a recent discussion with TSA about the facilities, a section of fencing was replaced with sterner stuff. Pass codes for pilots will now be changed regularly, so someone cannot use a months-old code to access the runway. Efforts by undercover TSA employees to access areas of the airport without clearance have consistently been foiled by policy-following airport personnel, he said.

Wendover Airport employees carry radios that can quickly connect to Tooele County Dispatch if an emergency were to happen, and deputies from the Tooele County Sheriff’s Office include the airport on their patrols. And to keep personnel sharp, employees go through rigorous training, Petersen said. Drills that include fire and law enforcement personnel are often conducted around different hypothetical incidents.

All in all, Petersen said, the airport should be secure and ready for any situation.

“There are always lots of different scenarios, but our communications and our ability to pull in outside help very quickly — I consider that to be excellent,” he said. “Knock on wood, we’re good so far.”