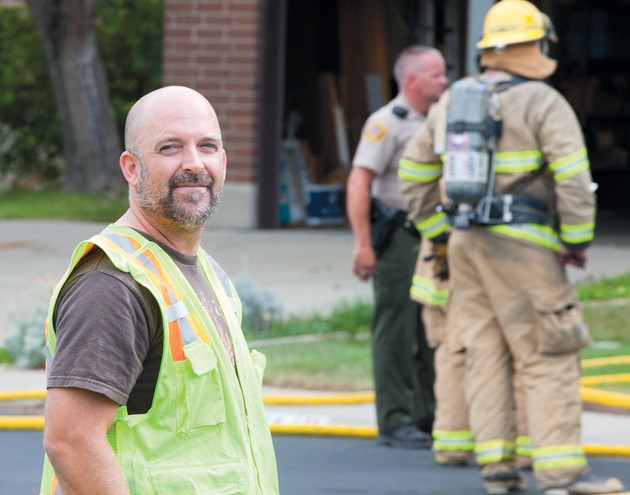 Chris Reiter noticed the smoke while out working for Stansbury Service Agency. He helped save the house from potentially more damage.

August 13, 2013
Man’s keen sense of smell may have helped save Stansbury home

A Stansbury Park employee who noticed that something was amiss likely saved a home in the township Thursday.

Chris Reiter, who works for the Stansbury Service Association, was driving down the frontage road Thursday morning a little before 10 when he noticed an unusual smell of smoke.

“It was an abnormal smell from a leaf fire or brush fire, so that’s what caught me, and then I noticed the smoke,” he said.

Reiter said he turned around and went to a house that had what appeared to be smoke coming out of a chimney. He  stopped to ask a neighbor across the street who lived in the home and if they were there at the time. When the neighbor said the woman who lived in the house was at work, Reiter said, they decided to call for help.

Ryan Willden, public information officer with the North Tooele County Fire District, said the fire, which likely originated from an electrical outlet in the basement, caused about $30,000 to $40,000 in damage — but could have been much worse if there had not been such early reporting and response. A dog and cat in the home were rescued and treated at the Stansbury Animal Clinic; no other injuries were reported.

Reiter said he had not met the homeowner before, but was happy he could help a stranger by stopping to investigate something he thought was out of place, even when no one else seemed to notice.

“I think most people, they smell smoke and they think someone’s just burning something out of their fireplace,” he said. “I had several firefighter say that and the rest of the neighbors said the same thing, that they wouldn’t have noticed it, either, probably just would have gone about their business. I was just glad I was there at the right time.”