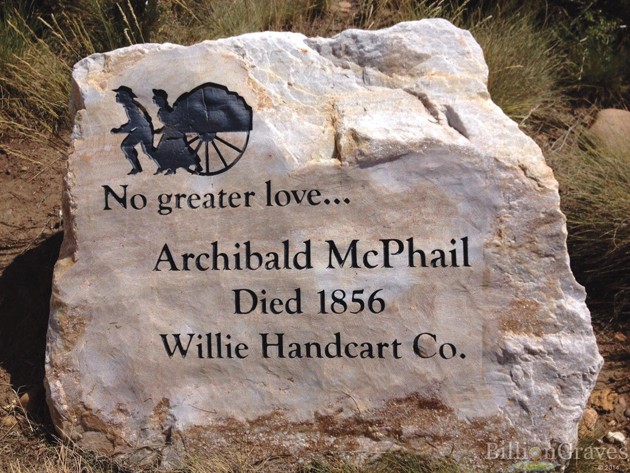 Headstone of Archibald McPhail of the Willie Handcart Company in 1856 who courageously gave his life for others to live.

March 11, 2021
Many pioneer stories of courage and faith to be discovered and shared

The headstone of Archibald McPhail symbolizes a magnificent story of the Mormon Pioneer Trail this writer had never heard before, though he traveled the trail four times and researched to lead three groups over it which included the infamous, but now sacred Rocky Ridge. As so many were, Archibald McPhail’s story is one of immense courage and faith in the face of impossible odds.

McPhail, his wife Jane and several children, were part of that ill-fated Willie Handcart Company of 1856 caught unprepared in the early snow and freezing temperatures of the Wyoming high desert. They were from Scotland and were headed to join the saints of The Church of Jesus Christ of Latter-day Saints in Utah. Not only was McPhail responsible for his own family’s safety, but was put in charge of a group of 20 who shared a common tent. Two of the group were older single women who were always lagging behind.

On a day they had traveled over 16 miles in deep snow and were forced to traverse Rocky Ridge, the second highest, steepest, and most rugged part of the trail through Wyoming, one of these women did not make it into camp. Archibald dutifully squared his shoulders, and on an empty stomach and exhausted body, trudged four miles back in the snow until he located her.

She was on the other side of a frozen creek just waiting to die. When McPhail bid her to cross to him, she would not, afraid the ice would break, and she would die not only from starvation and exhaustion, but also drowning in the ice bound creek. Brother McPhail crossed the creek and was carrying her across when the ice gave away. He was soaked to his waist but carried her the four miles back to their camp at Rock Creek Hollow.

By the time he got the woman safely to camp his clothes were frozen onto him. Too frail to do anything else, he crawled under a handcart where he lay with his head of his wife’s knee as she constantly brushed away the accumulating snow.

Jane had a small tallow candle that was the only source of comfort for either of them. She realized he would not live through the night. Her prayer was that the candle would remain burning until he died. Miraculously the candle kept giving it’s light when, upon Archibald taking his last breath, the candle went out.

The day was Nov. 6, 1856. Jane and the children made it into the Salt Lake Valley. Jane remarried, but still cleaned schools to finance her children’s educations.

So many untold stories remain to be found. This one is one of several that the Settlement Canyon Chapter of the Sons of Utah Pioneers heard so beautifully told by word and photo at the chapter’s regular monthly meeting on March 4, 2021. This was a virtual presentation by Jolene Allphin who has dedicated her life in discovering such stories of the 1856 Martin, Willie, Hunt and Hodgett companies and breathing new life into these courageous women, men, and children.

Jolene Spendlove Allphin and her husband Michael are the parents of 11 children. They have lived in Arizona, California and Utah.

Jolene is the author of Tell My Story, Too. The book contains 300 biographical sketches and over 650 pictures of pioneers and rescuers of the Willie, Martin, Hodgett and Hunt companies of 1856. Since 1999, in preparation for a Stake Pioneer Trek, Jolene has been researching, writing, and publishing stories of these people who paid such a tremendous price to reach the Zion of their hopes and dreams. Jolene has developed a deep love for these people and considers them friends whose stories of courage, faith and testimony continue to bless her every day.

Jolene served as a historical advisor for the movies Ephraim’s Rescue and 17 Miracles by T.C. Christensen. Jolene and T.C. Christensen co-authored the book More Than Miracles, published by Deseret Book in 2012.

Jolene also co-authored an art, story, and history book with Andrew D. Olsen and artist Julie Rogers, published by Deseret Book in 2013. It is titled Follow Me To Zion: Stories from the Willie Handcart Pioneers.