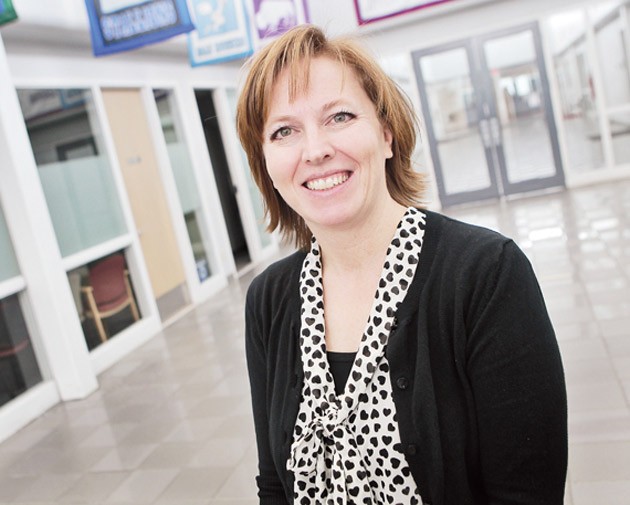 Maresa Manzione poses for a photo at the Tooele County School District offices on Tuesday. Manzione was unanimously elected as the new school board president.

Tooele County Schools has a new president of the board who vows to continue the district’s pursuit of excellence in education.

“I believe our schools are the best in the state,” said Maresa Manzione, who was unanimously elected president of the Tooele County School Board at their Jan. 8 meeting. “As a board we work well together and support our great teachers, and we are also open to the community.”

Kathy Taylor, newly elected board member who replaces Gary Gowans, also took her seat on the board for the first time at the meeting.

Manzione replaces Scott Bryan as board president. Bryan served one two-year term as president, but did not seek a second term. He continues to serve as a member of the school board, and nominated Manzione for board president.

“It was kind of a surprise to me,” said Manzione. “I wasn’t expecting to become the board president.”

“Unfortunately, at the same time I became board president, my time commitment at work also increased,” said Bryan, who works as an operations manager for Intermountain Healthcare.

Bryan explained that being board president requires additional time. The president represents the board on many committees within the school system and in the community.

Manzione downplays the role of leading the board.

“I am still just one voice out of seven,” said Manzione. “I work with the administration to set the agenda for our meetings, and then I run the meetings.”’

The board has already adopted goals, which include maintaining current class sizes, hiring and retaining excellent educators, and continuing to provide the best education possible for Tooele County students on a limited budget with a low tax base.

“I expect that balancing our budget will remain one of our biggest challenges,” she said. “We will continue to have to evaluate competing priorities and make choices based on want is best for all students.”

Manzione was appointed to an open position on the school board in September 2011 and was re-elected without opposition this fall.

Manzione was the PTA President of Overlake Elementary for four years and is currently the Tooele Region PTA President. She also serves on the North Tooele City Special Service District Board and has volunteered for 15 years with Premium International Exchange, a nonprofit that coordinates primarily summer exchange student visits.

Kathy Taylor said her goal as a board member is to make sure that every student receives the education they need to reach their potential.

Taylor taught and coached at Tooele Junior High School for 38 years before retiring in 1999. She also served for 16 years on he Tooele County Board of Health.

“My experience as a teacher and coach gives me a unique perspective on the board,” said Taylor. “One thing I have learned is happy teachers means happy students, and happy kids learn.”