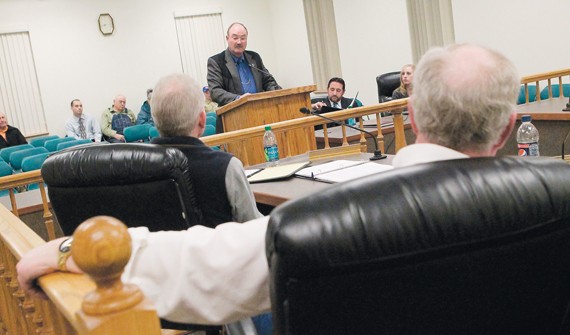 Grantsville Mayor Brent Marshall gives his State of the City address Wednesday to the city council. Marshall, the city’s first full-time mayor, touched upon topics such as fiscal responsibility during the address.

Mayor says future projects, such as library, will be characterized by fiscal restraint ♦

Grantsville’s first full-time mayor gave a first-ever State of the City address last night in which he detailed accomplishments in infrastructure improvement, economic development and emergency preparedness, while stressing continued fiscal restraint to deal with challenges ahead.

“It is comforting to recognize that through this difficult time we have seen just how strong we are as a community. Our strength as a community is evident in everything we do. It’s an important part of who we are,” Marshall said. “This is our opportunity to pause and reflect on our accomplishments, and where we could have done better — an opportunity to look to the future and consider where we are going.”

Marshall pointed to the settlement of the decade-long Grantsville-Tooele lawsuit as a major accomplishment last year.

“I applaud [Tooele] Mayor [Patrick] Dunlavy and [Stockton] Mayor [Mark] Whitney for their leadership, allowing us to come to an agreement in this matter,” Marshall said. “I commend the members of the city councils who made the decisions that will benefit our communities. All our communities are better today because of their leadership and efforts.”

More park projects and improvements are in the works for 2012, especially on the Mountain Vista Park in South Willow Ranches. Marshall said the city’s goal for that park is to complete groundwork, install a sprinkling system, plant grass and plan future ball fields.

Despite a drier than average winter, Grantsville still has flooding concerns looking towards spring, Marshall said. The reservoir remains full from a wet 2011, and should the weather become wetter in coming weeks, the city would need to be alert to possible flooding. Even if spring weather does not bring heavy rain or snowfall, Marshall said some areas of the city are in danger of flash flooding from sudden, heavy rainstorms, including the Little Reno subdivision and some homes in South Willow Ranches. City officials have been working with officials from Tooele County and Tooele Army Depot for cooperation on emergency plans in the event of flooding, and work began Tuesday on a flood control measure in the South Willow Canyon Wash via a grant from the Federal Emergency Management Agency (FEMA). Concrete slabs will be put in the creek coming down from South Willow to help stabilize the creek beds and reduce erosion, helping the water stay in the confines of the creek until it can safely flood out onto the Tooele Army Depot.

Fiscal responsibility and frugality were also themes in Marshall’s address. He said Grantsville’s budgetary position has continued to improve since the city suffered a financial meltdown in 2009 thanks to closer scrutiny of expenses and purchases. Marshall said revenues have increased past projections because budgets were drawn with a pessimistic view of sales and property tax revenues, which have exceeded those low expectations. Eliminating lawsuits and being fiscally conservative have also helped make money go farther, he said.

“The city’s revenue has increased over our budget projections and we continually monitor our expenses to ensure they are necessary and we receive the best price possible for items that we purchase,” he said. “These efforts resulted in a net savings without sacrificing services to our citizens. These savings will be used for future improvements to improve the quality of life for our citizens.”

Making sure the budget is fiscally sound has sometimes meant putting off or revising projects, as has been the case with the city library. Bids received in December were approximately $500,000 over the $1.8 million budget, and were summarily rejected as Marshall, council members and architects discussed ways to trim the project down. New bids on the revised plans will be accepted starting Feb. 10, and the contract should be awarded on Feb. 15.

The library, which will include an available community room and classroom for Utah State University courses, is expected to be finished by the end of the year.

In addition to the library project, Marshall said the city is trying to increase economic development by working with companies in hopes of attracting them to the area and bringing jobs with them.

He also pointed out some challenges that lie ahead for the city.

“As we plan for the future, we are confronted with the fact that these are difficult and complicated times,” he said. “Governments and businesses must find better and more efficient ways to do things if they are to survive.”

Maintaining fiscal responsibility while making necessary maintenance and improvements to infrastructure means some projects, including work on a few roads in dire need of fixing and improvements to the water system, will have to be done in stages. Most urgent among possible projects is an upgrade to the sewer system to help that 20-year-old infrastructure more efficiently deal with the residential growth of the city. Marshall said the most needed improvements to that system, including the implementation of generators at substations to seamlessly maintain function during power outages, will be done first, with other improvements done as time and money allow. Marshall’s message was well received by the handful of citizens who attended. “I thought it was very exciting, especially the part about college classes being here, in Grantsville, available to everyone,” said Nikki Thompson. “It’s exciting — education within people’s reach. I also didn’t know we had so many parks. I’m excited to play in the parks now.”

Pam Jensen was impressed with the mayor’s message of fiscal restraint.

“They’re doing things within the budget, and they’re keeping our finances down,” she said. “Finances are important, period.” Jensen said she and her husband, Raymond, have taken advantage of the mayor’s opendoor policy, and have enjoyed the opportunity for candor and communication with him. Raymond Jensen said he felt having a full-time mayor was beneficial to city operations.

Sheldon Riches said no points in the address came as a surprise to him, as he attends most city council meetings, but he appreciated the summary of the year’s events.

“It was excellent. I thought he did a great job. Together, he and the city council have done a great job over the last year,” he said. “It’s just really nice to see that they’re working together for a common goal, to better the community.”