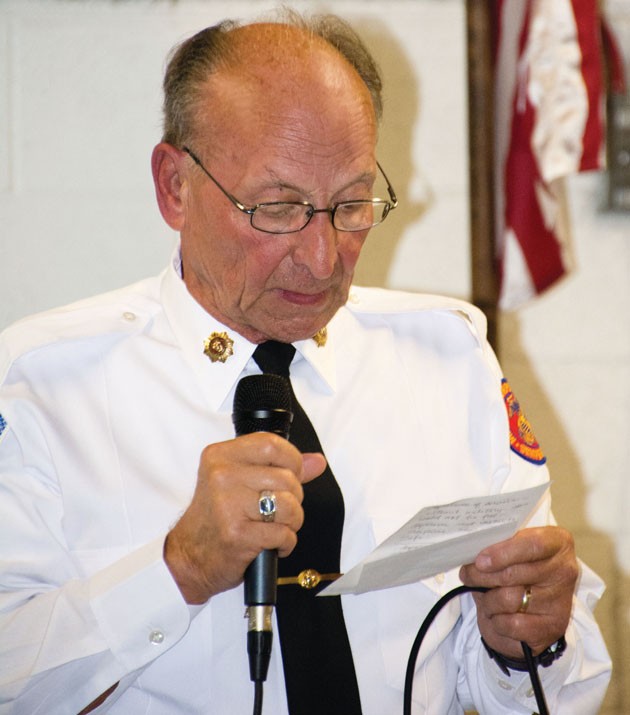 Air National Guardsman Harold McConnell speaks about patriotism at a meeting for the Sons of the Utah Pioneers.

Harold (Hal) McConnell is the commandant of the Sgt. Rodney M. Davis detachment of the Utah Air National Guard, and has been a member of the Air National Guard from 1990 to the present. McConnell, a native of Texas, tried to join the Air Force at age 17, but was disallowed because he hadn’t received his high school diploma yet.

Undeterred in his burning desire to serve his country, he was accepted into the Marines in 1966 and has since been on a personal mission to further the cause and brand of freedom enjoyed only in the United States of America.

Last Thursday, at the pavilion in Settlement Canyon he gave many heart-felt urgings to the members of the Sons of the Utah Pioneers and their wives who were in attendance. Following a sumptuous chicken and beef kabob meal topped off with strawberry shortcake, Madison Royal opened the presentation with a stirring rendition of the Star Spangled Banner.

McConnell is intensely patriotic. The following is a summary of his timely presentation:

•We need to support the military and our U.S. President if we are to continue to enjoy the lifestyle that has made this country the greatest in the world.

•We seem to be losing the patriotism we all felt following the devastation of 9-11.

•If you don’t love our country and its flag then get out and find some place where you are more comfortable.

•When you see members of our military, go up and thank them. Without them we wouldn’t be free today, and may well be speaking another language here in the USA.

•God kept him and this country alive and free during all the conflicts the United States has been involved in.

•Teach your children and grandchildren about patriotism in this great country.

•Serving in the military or a mission gives the young people of today the direction they so need in their lives.

•All who served in the military are veterans no matter the capacity served. Some want to believe that only those who served in combat are considered veterans, but that just isn’t so.

To a standing ovation, McConnell finished his address with the words, “Let’s keep America free and God bless America.”

The next monthly dinner meeting of the SUP will be on Thursday, August 3, at 6:30 p.m. in the LDS chapel on the corner of Pinehurst and Utah Avenues. The presenter for the evening will be Mark Curtis, who will give us a tour of the now torn-down “Guardo Mansion” in Salt Lake City. If you love the pioneers and history, bring a potluck dish and join us. And of course, everything is free.