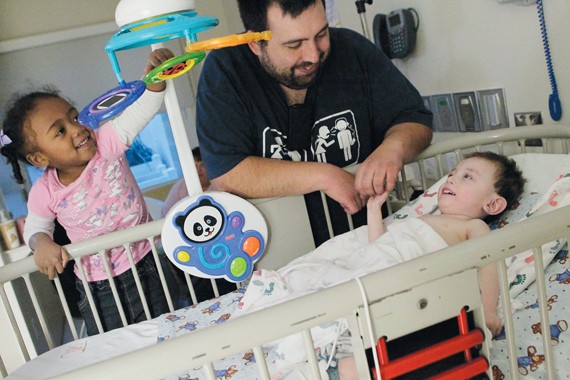 Halay McCracken twirls parts of a mobile on her little brother Skyler’s crib at Primary Children’s Medical Center while her dad Jonathan talks to Skyler Wednesday evening at the Salt Lake City hospital. Skyler has Menkes Disease, which affects motor and developmental skills.

Even after two and a half years of taking their son to the hospital, the frequent trips never get any easier for Jonathan and Stacy McCracken.

“When he goes in the hospital, you think, ‘Is this it?’” Stacy said.

Skyler McCracken, 2, has Menkes Disease, a rare genetic condition that affects motor and developmental skills due to the body’s inability to effectively transport copper. In his initial diagnosis, doctors estimated that he would live to be about 3 years old; while estimates since have suggested he might have more time, Skyler hits that milestone this month.

The McCrackens are the Transcript-Bulletin Christmas Benefit Fund Family for 2012. Hopefully, with the help of the newspaper and its readers, their troubles can be eased this Christmastime.

Stacy, 36, has battles of her own, as she recovers from a bout of pneumonia and receives dialysis for a kidney in the early stages of rejection. Jonathan, 39, and Halay, 3, are healthy, but the family has been displaced from their home for three months after a leaky dishwasher made their basement a fertile breeding ground for dangerous mold.

What would really make the season unusual for the McCrackens would be to stay out of the hospital for the holidays. For the past four years, the family has found themselves surrounded by sterilized medical equipment and staffs of doctors and nurses for one reason or another.

The first year, though, was something of a miracle — it was they year Halay was born.

Jonathan and Stacy had wanted children all along and tried to conceive naturally, but their goal was impeded by anti-rejection medication Stacy has had to take since a rare condition of her own required her to get a kidney transplant when she was 16, then another transplant at 26. Her doctors put her on a different kind of medicine that would allow her to carry a child with little risk of birth defects, but she had an adverse reaction to that medication and had to switch back to the first one.

They enlisted the help of a Sandy-based adoption agency, An Act of Love, to assist them with the process of finding and adopting a child.

“There was a form where you could say what kind of child you wanted — hair color, eye color, everything,” Jonathan said. “We just put down, ‘Child, healthy.’”

After a year of filling out the requisite paperwork, the McCrackens were cleared to adopt a child, and a few months later, in the summer of 2008, got a call from the agency. A pregnant woman in San Diego was interested in adopting out her unborn child, and had seen their adoption profile and wanted to ask some more questions.

Ten minutes after hanging up with the woman, they got a call back from the agency telling them that she had chosen them to adopt her child.

At the end of November 2008, the McCrackens got word that the mother could give birth at any moment, and immediately jumped in the car and drove from their Tooele home to San Diego, stopping only briefly for rest in Las Vegas. But in Southern California, they waited a total of three weeks before Halay was born.

The McCrackens were eager to go home with their new bundle of joy, but the paperwork lagged, and they were stuck in California — until it suddenly went through on Dec. 23. Racing to get ahead of a massive blizzard that closed off many roads and canyons in its path, the McCrackens made it back to Utah on Christmas Eve.

The next summer, a co-worker of Stacy’s approached her and said her grandson’s girlfriend had become pregnant through a one-night stand and was considering having an abortion, but could possibly be persuaded to deliver the baby and give it up for adoption. Though the prospect of a second child, and so soon, was unexpected, the McCrackens were thrilled.

Despite injections and other medical measures to help carry the pregnancy to full term, Skyler was born at 30 weeks on a foggy December night just before Christmas. He had to be rushed by ambulance — it was too foggy to risk flying in a helicopter — to the neonatal intensive care unit at the University of Utah, where he stayed for a month.

About six months later, worried at his apparent lack of development and his frequent ailments, the McCrackens consulted his pediatrician. Menkes Disease was initially mentioned as a possibility because of Skyler’s odd hair, which was long and blond on top but bunched in tight black curls in back, but dismissed because of the rarity of the disease, which effects roughly one in 350,000 boys. After doing some research on the Internet, though, Stacy said she was convinced Skyler did have the disorder, and asked that he be tested.

The test came back positive.

“I cried for days. I cried,” Stacy said of her reaction to the diagnosis. “It was really hard.”

Menkes Disease, which is passed from mother to son, causes the body to ineffectively distribute copper. In Skyler’s case, the copper building up in his brain has already kept him from developing to the level other children his age have, and as the disorder progresses it will slowly rob him of his ability to perform motor functions he has learned so far.

Skyler, though nearly 3, is about the size of a child half his age, and his hair now is more uniform, a straight light-brown all over. He doesn’t walk or talk, but his big eyes are quick to follow new people or things, and his wide, ready smile can light up a room.

Jonathan said the diagnosis was — and still is — most difficult because the life expectancy for boys with Menkes Disease is so short.

“You’re almost mourning him when he’s still alive because you know he doesn’t have very much time,” Jonathan said.

Although there is one man in Australia with a very mild form of Menkes who is 35 and lives a normal life, Jonathan said, most children die within the first few years of life. One thing that helps them cope is the support group they have found of parents and children dealing with the same disorder on Facebook. The support they give to each other, and in turn receive, helps get through the hard times, Stacy said. Unfortunately, as other boys succumb to the disease, it can also remind them what lies ahead.

“It’s a really good support group and it’s helped a lot, but it can be scary, too,” she said. “It’s really hard because you grow attached to these parents and these boys.”

Every new hospitalization is a reminder of that ticking clock, too, she said. Skyler was admitted into Primary Children’s Hospital Wednesday with pneumonia, giving the family cause to spend more time in a place they grimly joke about being their “home away from home.”

Jonathan said each time Skyler is taken to the hospital or becomes ill, it becomes difficult to go on with life as usual.

“It’s still tough, like today finding out he had pneumonia,” he said. “It’s hard being at work while he’s having trouble breathing. It’s hard to stay focused.”

Though Halay has herself been pretty healthy, she has spent many days in the hospital on account of her brother. Even as monitors steadily beep his vital signs and he is fed through a tube in his abdomen, Halay climbs the rungs of his hospital crib like a stepladder, and sings and talks to him softly. Stacy said the two children, though not related by blood, have tightly bonded as brother and sister.

“He’ll be crying and you can put her in front of him and he’ll laugh, or she’ll get in trouble and he’ll just laugh at her,” she said. “She adores him and he adores her.”

Because of the mold infestation, which was particularly dangerous given the lowered immune systems of Skyler and Stacy, the family could use replacement linens, such as towels and sheets, and replacements for much of their kitchen appliances.

The children could also use clothing, especially staples such as socks and underwear, and jeans and tops for Halay and soft clothing, such as jersey or sweats, for Skyler. Halay wears a size 5T to 6T, and Skyler wears size 18 Months. Halay likes dolls and princesses, especially The Little Mermaid. Skyler likes toys with lights and noise.

The Bit and Spur Rodeo Club has pledged to donate $500 to the benefit fund.