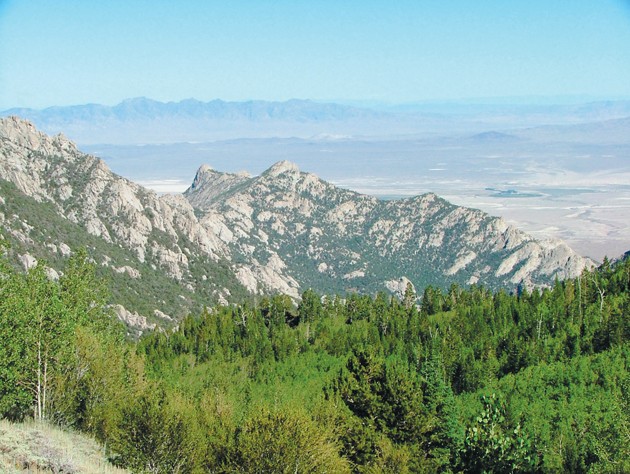 April 11, 2013
Memories from the Deep Creek Mountains are forever on the trail edge of my mind

The time Gordon Lightfoot speaks about in his song still exists in the Utah Desert. The Deep Creek Mountains have been relatively untouched and unchanged by man.

The rocky glacial peaks of the Deep Creeks support a surprisingly well developed coniferous forest. No matter from what direction you approach the mountains, you will cross nearly 100 miles of the most barren and desolate desert wilderness that can be imagined. There are several cold perennial streams in the canyons that trickle down through boulder gardens and pine forests until they exit canyon mouths. But then they are quickly consumed by the desert.

I have had the privilege to explore this incredible wilderness on several occasions. One of my fondest camping memories is when my wife and I loaded up with two packs each — one worn on the front and back — military style with a rifle over one shoulder, a .45 on the hip, and hiked Granite Creek Canyon for several days. We made a remote camp on a stream about 800 meters off of a so called trail near giant boulders in a stand of aspen.

Total solitude is what we found. I took a stroll one morning down to the creek where it was creating clear, deep pools among giant granite boulders, and I noticed the famed Bonneville cut throat trout swimming about. They were four to six inches long and strangely black with speckles. I sat there on a smooth sloping boulder that terminated in the creek and looked up at towering granite columns piled high to the ridge tops. Smooth rock and pine — a perfect place for a mountain lion to call home.

The stars were amazingly bright at night as seen through the aspen canopy and even though it was early August, there was a serious chill in the air. But it felt good and the forest and night smelled good. Anyone who has ever bedded on top of old aspen leaves will know what I’m talking about. In the morning, we broke camp, packed our gear and hid the big stuff, and began a trek to the high plateau in between Red Mountain and Ibapah Peak. There were several little streams and springs along the way, and some curious pretty purple flowers that I have seen nowhere else. I noticed white pine, Douglas fir, limber pine and Engelmann spruce just to name a few.

The views along the way to the plateau were incredible. Off to the south, below giant rock slides and chutes of Red Mountain, is a wilderness of granite rock lenses, boulders and towers that rise from a sparse pine forest. Ibapah peak looms to the northwest and an other worldly forest canopy, jumbled rock walls of lower granite, and the hideous desert below, are what you see on your back trail.

Speaking of the trail, why is it here? In last week’s article, we talked about William Eimbeck and his survey of the 39th Parallel in 1889. Eimbeck and his team of “Sunwriters” (so named due to the mirrors or heliographs they used to signal to each other from peak to peak) took the railroad from Ogden to the now extinct town of Tecoma, NV on the old transcontinental railroad line and then built a road from there down to Pilot Peak.

They busied themselves for the next few months building a trail to the top of Pilot Peak and a station on its summit to conduct their work of measuring heliograph lines from peak to peak in order to obtain accurate elevation and lines of distance for future maps and surveys. When they were finished at Pilot, they headed south to Ibapah and built several trails to the summit, one from the west side and one from the east side up Granite Creek.

When I climbed Ibapah for the first time in 1994, it was early season and we followed consolidated snow drifts to the base of the summit cone. When we got into the rock pile, to our total surprise we found a good trail of switch backs to the top. This trail section was defined and in good shape!

On top we discovered two curious structures. There was a piled rock pier on the west end of the summit and a round shelter-type structure built of heavy granite rock with wood plank floor boards in it. This was Eimbeck’s station and it was in a remarkable state of preservation due to the fact that this peak is one of the least accessible in the State.

Many peaks in Utah had these stations built on their summits, but more accessible ones such as Deseret, Nebo, Ogden and Frary (Antelope Island highpoint) have little or nothing left of them due to vandals over the years. As I sat there tired, thirsty and sunburned on top of snowy Ibapah, I thought about how Eimbeck and his crew lived in dugouts below the peak on the plateau at 10,400 feet and made the trek up to the summit daily for over a month with pack mules — after they had painstakingly built a trail to the top. Amazing!

You could fill a book, not just a few articles, with stories on the Deep Creeks and the island forest and strange high altitude tundra that occurs here in the middle of the desert. There are so many other places to explore such as Indian Farm Creek with its cold stream and incredibly huge boulders and slick rock faces, and the wide basin that is full of grass and aspen below Ibapah Azimuth and Rocky Peaks. There is also the quiet, unknown areas such as the Delle, which is a vast open bowl on the west face of the range.

Much of the Deep Creek Range is a Wilderness Study Area now and hopefully Congress will protect the majority of this unique area as wilderness. If you want to visit the Deep Creeks, my recommendation is Granite Creek Canyon. It has the best access even though it is still primitive. For directions to the range, contact the BLM Office in Salt Lake City or Fillmore, Utah.

The trail up Granite Canyon starts at a few gigantic boulders where the road has been blocked. From here an old two track continues for a few miles and then deteriorates into a single footpath that is easy to follow in most places. Alpine tundra, bristlecone pine and windswept summits await you. Do not take a trip lightly into this area. There are no services for over 100 miles. You will need plenty of water, fuel and food to venture out this way, good maps and preparation and a lot of common sense. If you do find you are up to it, you will never forget a trip to the Deep Creeks. The memories of my adventures there will forever be on the trail edge of my mind.