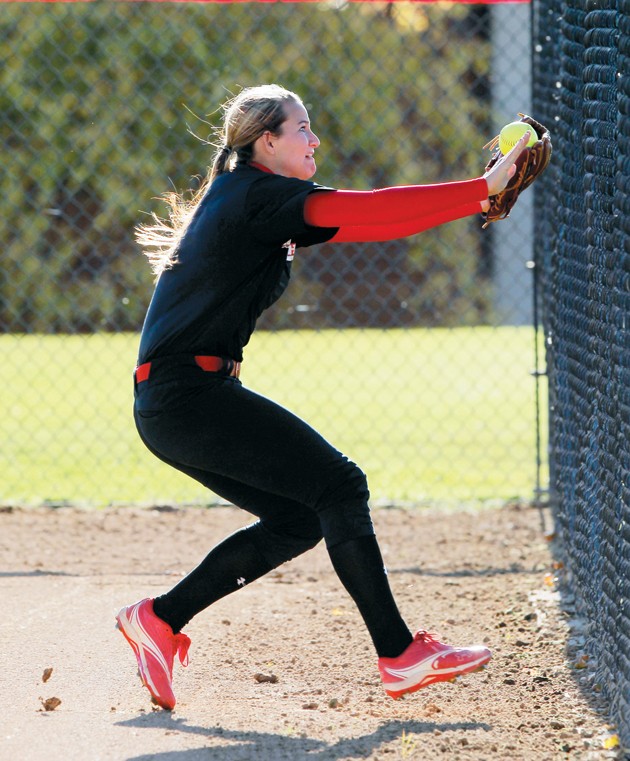 Marissa Mendenhall, sophomore softball player for the University of Utah, makes a catch in an exhibition game against Weber State on Oct. 18, 2012. The former Buffalo has quickly become a key contributor in the Utes’ batting lineup. courtesy of Steve Wilson/University of Utah

Former Tooele High School softball player Marissa Mendenhall made an immediate impact for the University of Utah last year, and in the beginning of her sophomore year she’s doing much of the same.

Mendenhall plays back and forth between right field and as the Utes’ designated player. She hit .320 in the first 10 games, which is the fifth-highest batting average on the team out of the players who have played in all 10 of Utah’s games.

“It’s such a fun experience playing at the college level,” Mendenhall said. “It’s different than playing in high school and in the summer. You work so hard to get to that level.”

Mendenhall’s nickname is “Bug” and sometimes Utah coach Amy Hogue almost writes “Bug” on the lineup card before games. Hogue said having Mendenhall on the team has made a big impact, and she can’t wait to see just how far Mendenhall can go.

“She plays it the right way,” Hogue said. “She plays the game with respect. She knows she’s not always going to have a good game, but whether she has a good game or a bad game she’s steady.”

After helping THS win multiple state championships, Mendenhall now has the challenge of competing against the best of the best. The Utes, of course, compete in the Pacific-12 athletics conference against national softball powers such as Oregon, Arizona, UCLA and Stanford. As a freshman in the Pac-12, Mendenhall hit .286 for the year with two home runs and 10 RBIs. In just 10 games this season, she already has eight RBIs.

“Playing in the Pac-12, it’s one of the top softball conferences,” she said. “It’s such an amazing experience. You watch TV and see the big names, and it’s fun to play against those girls. It’s so much better, and the game’s a lot faster.”

Hogue said she had plenty of opportunities to see Mendenhall play while recruiting her, but even though she got to take her time in Mendenhall’s recruitment unlike out-of-state players, Hogue knew she wanted her.

Mendenhall said playing in the Pac-12 means she gets the best training in order to compete against the best pitchers in the country. She said she always feels ready for the challenge because of team preparation.

“You train for it,” she said. “The coaches want you to succeed so they do a great job of getting you ready.”

As part of putting Mendenhall in a position to succeed, Hogue moved her to right field.

“She doesn’t throw soft so we moved her to the outfield,” Hogue. “She knows one way to play and that’s hard. It’s going to be an adjustment for her because it’s not a position she’s used to playing, but it’s the position where she can have the most success.”

Hogue said Mendenhall is coachable, which she said means she’s willing to leave her comfort zone.

“She tries things that are uncomfortable,” Hogue said, “and that’s actually a problem with this generation. Once they get comfortable they don’t want to get better, but not [Mendenhall]. She’s willing to try. She has trust in her coaches and teammates.”

Mendenhall started the year hitting fourth in the lineup and most recently hit fifth. She said it doesn’t matter where she hits in the lineup because she just likes hitting. That mentality has helped her be the early-season team leader in runs batted in and a .412 batting average with runners on base.

“You have to relax when there’s runners on base,” she said. “Take one pitch at a time. It’s something I’ve learned to deal with.”

Mendenhall has a .452 on-base percentage with six walks in Utah’s first 10 games. She credits good at-bats for that success.

“Don’t press,” she said. “Don’t try to do things you’re not capable of doing.”

Hogue said Mendenhall presents a disadvantage to pitchers at any given moment.

“Her power at the plate is a threat at any time,” she said. “She makes good adjustments. Just when pitchers think they have her beat, she’ll come back in the next at-bat and adjust to beat them in a different way.”

Those adjustments make Mendenhall a dangerous sophomore, but Hogue is especially excited to see where she’ll be as a senior. She has no doubt that Mendenhall will be the leader of the team as a senior.

“You’re going to get out,” she said. “That’s how good these pitchers are, but she’s great at assessing and adjusting. I credit her parents for that. She doesn’t doubt herself or pity herself.”

Mendenhall and the Utes return to action on Friday in Palm Springs, Calif. They will play five games in three days against Colorado State, LIU Brooklyn, Nevada, Ohio State and Cal Poly.

The next in-state game where local spectators have a chance to see Mendenhall play will be on March 5 when the Utes visit Orem to battle Utah Valley University.