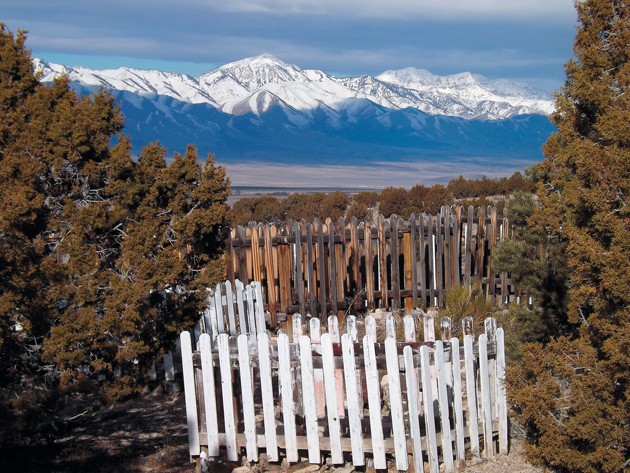 Deseret Peak and the Stansbury Mountains as seen from the center of the Mercur Cemetery.

Down south along state Route 73, beyond the Ophir turn off, is an old green sign that reads “Mercur” with an arrow pointing east toward the hills.

Looking around the surrounding area, it is hard to imagine that long ago, one of the largest cities in Utah, one that was famous throughout the world due to its rich mines and innovative milling processes, existed just a few miles up the canyon.

Much has been written about Mercur and its history. One of the best articles around on the subject was written by my friend Clint Thompson — the “Bonneville Mariner” — and it is available online at http://bonnevillemariner.wordpress.com/2010/10/29/ghosts-of-mercur-cemetery-dont-reveal-themselves-easily/.

I won’t go into great chronological detail on the history of Mercur, but I thought it might be interesting to dig through the archives and find out why this place was so incredible back in 1899. To summarize, here is text from an article in the April 4, 1899 edition of the Salt Lake Mining Review.

It stated, “The most wonderful mountain railroad in the world, and the only road into the most celebrated gold camp in the United States. The largest cyanide mill in the world is in the camp of Mercur. A trip there will add years to your life and expand your ideas of the importance of this immediate country.”

This camp or town Mercur, in the Camp Floyd Mining District, was an incredible place back then, but I’m not certain it would add years to your life.

If you visit there today, the only thing left that suggests Mercur ever existed is its heavily populated cemetery, which lies bleaching in the sun on top of a juniper and sage covered hill at the mouth of the canyon. It is hard to imagine that visiting this place more than 100 years ago would have added any time to your life at all.

Something interesting about this cemetery is the fact that most of its occupants are unknown; there are nameless graves surrounded by rock enclosures or sun bleached wooden fences. These people are a page in history that time has forgotten. More about the cemetery in a bit, but for now, back to the place called Mercur.

While fantastic in its claims, the article bore true that the great “Golden Gate Mill” was the largest and most advanced mill of its time in the world. This incredible structure utilized the process of cyanide ore reduction. Construction on this behemoth began in the summer of 1897 and was built on eight levels up the side of the hill brooding directly over the town of Mercur. It was 610 feet long, 407 feet wide and 205 feet tall.

The processes used in the mill at the time were cutting-edge technology where strip mining and crushing of rock to a very fine particle size allowed for leaching and precipitation of precious metals, namely gold, out of rock that was previously un-recoverable. The mill had a crushed ore storage capacity at any given time of 2,500 tons. This fine material would then enter giant roasting ovens that were capable of processing 600 tons of ore per day.

This massive production capability was made possible by a sub-station that provided 40,000 volts of electricity, which originated in Provo Canyon and was carried to the Oquirrh Mountains by 40 miles of transmission lines. The electrically powered machinery exponentially increased production capability. Newspapers of the day boasted and raved about electricity coming to the mining camps, Mercur in particular. The entire mill was constructed of steel and it was claimed by its owners to be “fireproof throughout.” At that time, miners at Mercur brought home a wage of $2.50 per day of back breaking labor.

Another amazing aspect of this mining town was the extension of the Oregon Shortline railroad that transported persons and materials to it from Salt Lake City. Trains would leave daily from Salt Lake City to Mercur at 7:30 a.m. and return from Mercur at 4:30 p.m. One advertisement claimed that this would allow for several hours to be spent in the mining camp for tourists stating that “Everyone should see Mercur! Its mines, mills and railroad.”

If you query historic pictures of Mercur on the Internet, you will see an amazing Old West town huddled to a congested degree beneath the massive Golden Gate Mill. Then query Mercur Fire pictures and you will see what destroyed this town several times completely: Fire — the Nemesis of the Old West. Due to its steel construction, the Golden Gate Mill survived each fire but after several iterations of total destruction and total rebuilding, Mercur was forever abandoned.

In the early 1980s Barrick Corporation obtained the property at Mercur and mined and processed the entire town, historic tailings and a good portion of the mill site, erasing any trace of the old town in the process. It is not possible to visit the site of Mercur but a trip to its cemetery is well worth the effort. In next week’s article, I will detail my experiences there and talk a little bit more about the echo of a memory that is Mercur.