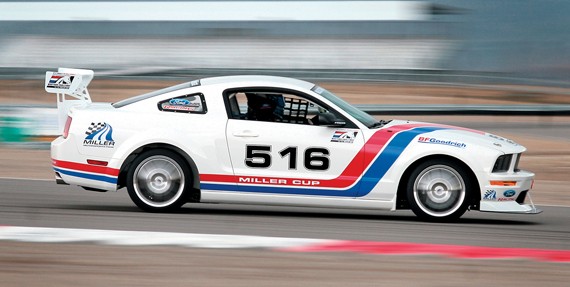 A racer in a Miller Motorsports Park Ford Mustang stock car practices on the track. All local sports car racing at MMP will now be organized by the newlyformed Utah Region of the National Auto Sport Association or NASA.

The marketing focus at Miller Motorsports Park has changed somewhat since the world-class racetrack opened six years ago in a quest to meet the needs of local residents.

The park took a giant step in that direction this year by joining forces with the National Auto Sport Association — an organization which has existed for 25 years with the goal to help people experience for themselves the thrill of racing.

“We have been operating the Miller Park Racing Association since the track opened, to grow the sport in this area,” said MMP media manager John Gardner. “Now we’re ending the MPRA and all local sports car racing — as well as our Open Track Days — will be organized by the newly-formed Utah Region of the National Auto Sport Association.”

“The organization is known as NASA, but they have nothing to do with the goverment’s space program,” Gardner joked. “Our relationship with NASA will be beneficial to those who want to learn to race as well as MMP, and will offer our competitors a chance to compete in the NASA National Championship event in September at the Mid- Oho Sports Car Course.” The NASA National Championship event was held at MMP two years ago.

Regional Director for NASAUtah is Aaron Brown. “There are plenty of people out there who would just like to go out and drive their car fast on a road track and we provide that opportunity,” Brown said. “The motorsports world is full of Type A personalities who want to compete and we give them a chance to do it. For the most part, racing is a dangerous sport and you do need good gentlemen rules and NASA provides the structure to allow full-out racing or the chance to see what your car can really do.”

He said that MPRA wrote some loose rules to get things going, but the association got bigger and bigger until it needed a national association to step in.

The NASA High Performance Driving Event offers people an opportunity to work with an experienced racer to help guide them, one on one, to learn how to handle their car at the limit. People set their own goals and go as fast as they feel comfortable going. They can progress as far as they want, even get a competition license.

Brown said that some NASA regions, the closest is in Southern California and includes Las Vegas, have as many 400 competitors in their programs. He expects to get about 150 competitors the first year with NASAUtah.

“It is very gratifying that NASA has agreed to create the Utah Region,” said John Larsen, MMP general manager. “It will take our local racing and trackday programs to a new level.” The public can learn more about this racing program at NASAUtah.com. NASAUtah will hold nine races at MMP this year starting with an enduro on March 31. People can also contact the director of NASAUtah with questions at (801) 613- 2781.