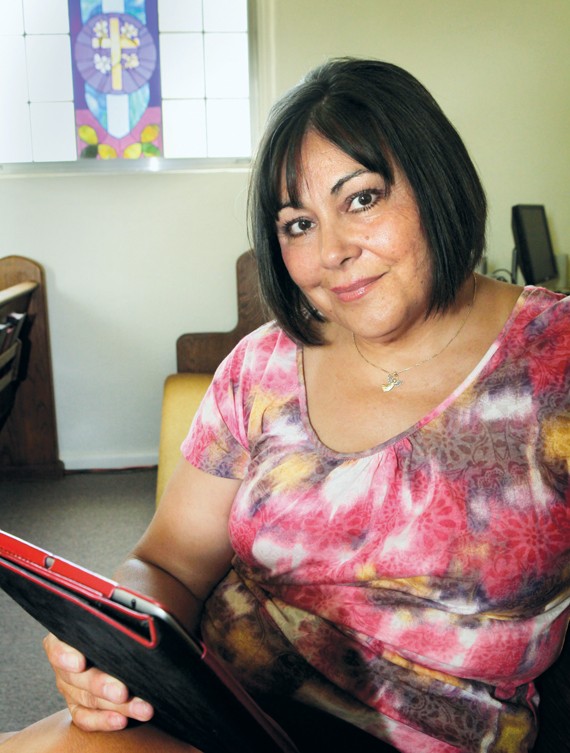 United Methodist Church Pastor Debi Paulsen poses for a photo in the Tooele church with her iPad Wednesday afternoon. Paulsen uses her iPad during her sermons.

Do cell phones and tablets have a role to play in church or are they an ungovernable temptation? ♦

Churches are spiritual refuges for many people — a place where worldly concerns and influences can be set aside, at least for a few hours. But with personal mobile devices like smart phones and tablets becoming increasingly common — and email, websites and text messaging only a touch away — is that spiritual refuge as strong as it once was?

Some say personal technology is an unwanted intrusion into religious services. Others maintain that an iPad can be bent to a spiritual purpose as easily as it can be used to play Angry Birds. And a few local religious leaders say technology is truly enhancing their ability to spread their message as never before.

Elliott Morris, stake president of the Stansbury Park Utah Stake of The Church of Jesus Christ of Latter-day Saints, thinks technology is absolutely beginning to play a bigger role in church services — a trend he embraces so long as the goal remains spiritual.

“If I knew the answer to whether people were playing games or reading scriptures on their devices during church, I would rest a lot easier, but I think the majority of people are using their iPads or smart phones for looking up scriptures,” he said. “I use my smart phone during church to open up a scripture sometimes, and I’ve sat next to other adults who are using their devices for the same thing. However, we’ve tried to discourage using them for games during church. We’ve asked parents to put restrictions on game playing, because kids will be kids and they’re going to want to play games.”

Although the LDS church doesn’t have an official policy on technology use during church, Morris said it’s still important for people to stick within proper boundaries.

“Even I’ll be sitting in a church meeting and get a text message, and there’s a temptation to want to respond to that message,” he said. “I have to resist that temptation to carry on a text conversation during the meeting. You have to be able to discipline yourself.”

On the opposite end of the spectrum is Bible Baptist Church Pastor Jeff Sinner, who said his church doesn’t have a need for advanced technology — especially smart phones — because they’re a distraction during church services.

“I try to discourage my people from using their phones in church,” Sinner said. “It’s a big distraction. Kids are constantly texting. As a kid we used to pass notes back and forth, and nowadays they text each other. It’s more of a nuisance than a help. Sometimes I feel like I need to pass a basket around just to collect the kids’ phones.”

Sinner said he has a couple of bible apps on his phone, but he doesn’t use them during church because he doesn’t want it to become a trend.

“We just don’t have a need for advanced technology,” he said. “My father-in-law is trying to get me to create a phone app for the church, but to be honest I’m just too old school.”

Pastor Debi Paulsen of the United Methodist Church in Tooele said while she embraces new technology at church — specifically her iPad that she uses to make notes for preaching sermons — most people in her congregation don’t.

“I use an iPad, and I’m probably the most electronic savvy,” she said. “There’s me and maybe two or three other people, but we have an older congregation and they don’t care to use technology.”

Paulsen feels like technology at church has its place as long as it’s used properly and makes the congregation feel comfortable.

“For example, we installed a TV screen about a year ago that our older people love because they can see the words to songs better,” she said. “But I don’t have many young people in my congregation. There’s not many who would want to make technology play a key role.”

Paulsen said although her congregation isn’t currently comfortable with adding more technology to a regular church sermon, she feels they’d be open minded about it if she decided to institute new technological practices.

“I work with another congregation in West Jordan, and we have interactive services where people can text in questions,” she said. “Then we’ll go through the texts and answer them while preaching. I would love to start something like that in Tooele. If the older people in my congregation wanted to do something like that, I would be open to it. It helps people to pay attention and interact more.”

Starting interactive sermons may be a slow and steady process, but Paulsen said she sees churches leaning more toward technology-based sermons in the future.

“I am ministering to people who don’t attend church regularly through Facebook,” she said. “I provide online lessons and send them messages to see how they’re doing. I definitely see technology as a key role in churches in the future.”

Pastor Rick Ehrheart of the Mountain of Faith Lutheran Church in Tooele has used his iPad to give children’s sermons, and there are a handful of people in his congregation who have Bible apps on their phones that they use during services. Still, he said technology has limits.

“I know people like to use the Bible app, and I use it, but when it comes to studying, it’s not as conducive as having your own Bible where you can make notes,” he said.

Father Sam Dimsdale of St. Marguerite’s Catholic Church in Tooele said his church doesn’t use much technology, but as long as it doesn’t detract from what’s being taught during Mass, he doesn’t mind if attendees use it.

“We have a few people who have apps that have the Bible readings on them for during Mass, but they’re no more distracting than the books we use,” he said. “As long as they are aiding the liturgy and not harming it, and as long as it doesn’t become the focus, then it’s fine.”

However, Dimsdale said increasing the amount of technology at his church isn’t a top priority.

“I’m more worried about replacing my 38-year-old carpet and that takes priority over any type of new technology,” he said.

Bill Upton, pastor of Tooele First Assembly of God, said his church also does not have much of a desire to use technology for church services, but inevitably, the church is going to be moving in that direction, even if it’s just to keep up with its members who don’t regularly attend church.

“We’re working on getting a podcast,” Upton said. “The goal is to put it on the website, and it will just be audio, and people can download it to listen to during their free time.”

“The nice thing is that technology helps people come to church without coming to church,” he said. “They can get the message at a more convenient time if they have to work and not necessarily be there on Sunday, which is good.”

“Instead of a printed newsletter, we use an electronic newsletter and we have a Facebook presence,” he said. “In addition to our printed bulletin each week, we make it available through our website so people can download it to their iPad or Kindle and then follow along during church.”

Whittaker said each week there is a series of readings printed on the bulletin that he goes over during Sunday services. On average, about five people bring their tablets to church to use, but he expects more will join in during church with their tablets in the near future.

“I use the iPad for my bulletin, sermon notes and research,” Whittaker said. “I also have a couple of electronic Bibles on my iPad.”

Whittaker said the building is hooked up to wireless Internet, so anyone who is at church can link into the network while they are in the building. Although the Internet is readily available, Whittaker hasn’t noticed anyone abusing the freedom and playing games during services.

Whittaker feels like technology use in churches is growing and will continue to grow steadily.

“It tends to be the younger people who are more willing to use it, but even the older people are catching on,” he said. “Some older people are learning how to use the smart phones and iPads. It can really add to a church service because it’s easy to download the materials and follow along.”

Morris said, overall, technology is a great thing and he hopes to see it further utilized during church meetings.

“It can be used for scripture study, accessing church websites, for family history research and for accessing addresses and information to help leaders in their ministry,” he said. “Those things make technology a wonderful blessing. On the whole, I’m in favor of it, so long as we know where the line is and we don’t use it for things we shouldn’t be using it for — like games — during church.”