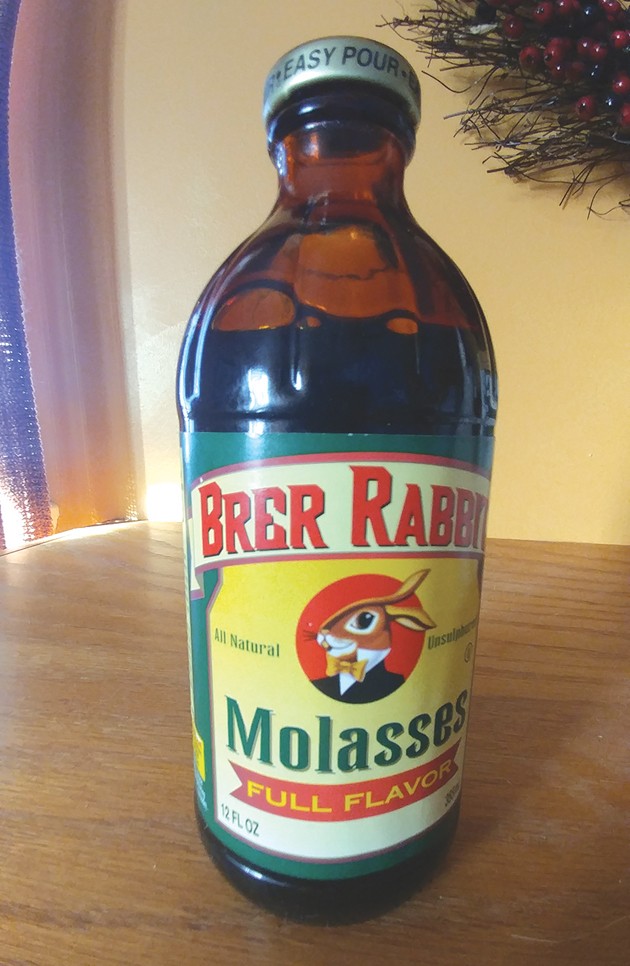 Molasses has been enjoyed by many generations and is still readily available today.

January 4, 2018
Molasses is actually the ancient word for honey

During a recent visit to family in southern Arizona, I helped my brother prepare one of his marinades for rotisserie meats. Over the years, he’s become accomplished at putting some delectable treats on the table from the smoker, grill or spit.

One of his preparations included a generous portion of molasses. That got my attention. I’ve always enjoyed the dark, syrupy sweetness of this legacy sweetener. There were other spices and such in the marinade, but the molasses imparted a distinct taste, as well as a beautiful color. The end result did not disappoint.

With such a positive experience (and a couple of swigs of molasses when nobody was looking!), my curiosity about this heritage product came to the forefront once again.

Molasses has been around for a long time and has had various competitors for mankind’s sweet tooth. The origin of the word molasses is actually the ancient word for honey — “miel.” It is indeed honey-like, thick, sweet and sticky. Molasses has even made it into vernacular use. When something or someone is overly slow or methodical, we use the phrase, “as slow as molasses.”

What is molasses? Can you make it yourself? Molasses is one of the by-products of the sugar production process: extracting table sugar from sugar cane or sugar beets. To make molasses, you first need to make sugar. Juices are extracted from sugar cane or beets and the sugar is crystallized by boiling the juice. When the crystals are removed, what remains is molasses.

Blackstrap has been promoted for years as a health supplement, because of its minerals, including iron. The mineral proportion in the molasses is the same as in the sugar cane, just much more condensed. Blackstrap has also been used as an animal feed additive, and is sometimes tilled into soil to stimulate microbial activity. Some people like the taste, and use it for culinary purposes as well.

The production of molasses was likely discovered and developed in India as early as 500 B.C. It wasn’t until much later that knowledge of the process was available in Spain, ultimately resulting in Christopher Columbus bringing sugar cane to the West Indies. As a result, molasses was a major product in the Caribbean — and unfortunately one of the components of the slavery trade. Later, during the early 20th century, molasses production was introduced to the United States. Now, molasses is in large-scale production, not only here in the U.S., but in Brazil, the Philippines, Thailand, Taiwan and India.

Molasses comes in two types: sulfured and unsulfured. Sulfured molasses is produced from young sugarcane. Sulfur dioxide, used for preservation, is needed because the syrup that comes from less mature cane is prone to spoilage. However, molasses extracted from ripe sugarcane does not need sulfur and retains its rich and light flavor without needing this preservative.

With all the ready availability of sweeteners at the grocer, it’s hard to imagine a time when sugars and sweets were somewhat of a rarity. Molasses, along with honey, was one of the products that filled the sweetness demand. Although molasses is not as commonly used as it once was, it is experiencing a comeback of sorts. It’s used for baking, as well as the brewing of ale and other alcoholic beverages. Dark Karo syrup has a type of molasses in it. You’ll also find it used in vegetable glazes, baked beans, dark breads, BBQ sauce, pies, cookies, and of course, gingerbread – especially this time of year.

Gingerbread was enjoyed by our ancestors not only for its taste, but also for the consistency that allowed shaped cookies and decorations (including small houses!) to be made. While the cooked dough is slightly soft and chewable, it is hard enough to stand erect and provide a nice palette for decorating with frosting and hard candies.

While gingerbread does contain ginger powder, it’s the molasses that greatly contributes to creating the characteristic gingerbread taste, as well as its color.

Here’s another common use for molasses that I bet you have in your pantry. Did you know that brown sugar is a combination of regular refined white sugar and molasses? The moisture and color of the molasses is on full display when you cut open a packet of brown sugar. As an aside, my wife Maggie has a foolproof trick to soften hardened brown sugar: put it in a plastic bag or covered bowl with a slice of bread, and let it sit a day or two. The moisture in the bread moves into the sugar, making it soft again.

The use of molasses also extends beyond the kitchen. It is an industrial product as well, used in construction (as a concrete additive in some countries), fermentation processes such as yeast production, crop fertilization, soil bioremediation (removal of contamination), waste-water treatment, and even as a component in bio fuels. Because molasses is produced from a widely grown crop that grows readily, molasses production is sustainable.

I found another use I think is endearing. While looking up recipes, I came across Grandma’s Molasses website (grandmasmolasses.com). Not only was there a plethora of great recipes, but I also noticed a link at the bottom of the page entitled, “Elephants Love Grandmas.”

As it turns out, Grandma’s Molasses partners with The Elephant Sanctuary in Tennessee. Elephants love the taste of molasses, so it’s served as a way to entice them to take their medications and supplements. Molasses conceals the unpleasant taste of the medicines, so the elephants readily enjoy a great snack, while getting what they need to help them remain healthy.

Next time you’re at the grocery store, buy a bottle of molasses. Or, perhaps dust off a bottle that you’ve had on the shelf for a while. With your newfound knowledge about the origin of molasses, you just may be tempted to enjoy it more and put this old time sweetener to work in your present day kitchen.