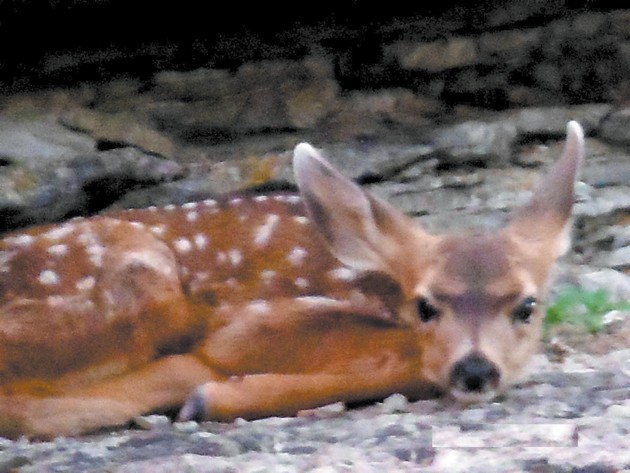 A fawn lies comfortably still in a shaded area above Churchwood Drive. Addie also found a sibling hiding safely nearby.

Among the autumn seasons of North America, white-tailed deer generally give birth six months after mating. Though mothers usually raise one to three youngsters at once, on rare occasions, doe may birth quadruplet fawns.

Within 20 minutes to an hour of being born, fawns are capable of standing, walking and nursing. They can also move from their birthing place within three hours. During this time, mothers will swiftly groom blood and afterbirth to keep their young from attracting predators and insects. In fact, fawns are groomed on a daily basis so they remain scentless to predators. The spots on their backs also help to camouflage, mimicking specs of sun on the ground.

Many people have reported seeing injured or abandoned fawns, but most of the time, this is not the case. Mother doe do everything they can to avoid being seen with their young, for if they are spotted by a carnivorous predator, it is not the doe that is chased and killed.

Having their eyes and ears on them, doe keep their fawns safely nearby, at a maximum half-mile radius. The mother’s scent also helps to lead predators away from their fawns. If danger approaches them, they will bawl loudly, allowing their mothers to hear them and make a quick response.

No matter how tempting it is, do not approach, pet or touch a fawn because human scent will stick on them and attract hungry enemies.

Not long after a mother returns from grazing, she will call out once the area is safe, and the baby will come running to her to be fed and groomed.

Another interesting fact, sibling fawns are all hidden separately in different locations by their mother. This is in sharp contrast to human mothers who typically gather their young close by when they sense danger.

Addie T. Lindsay, 16, is an accomplished writer and a photographer of wildlife creatures big and small. She can be contacted at CritterChatter@live.com.