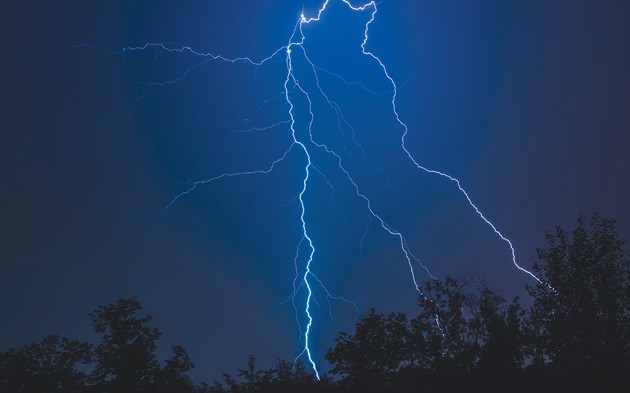 Although the night sky over the West Desert featured the moon and stars, columnist Jaromy Jessop was prepared to lay down on a barren hill for protection during a passing thunderstorm.

August 17, 2017
Moonlight and thunder make for a great night in the desert

Editor’s note: Outdoor Adventure columnist Jaromy Jessop is taking a break this week from his multi-part series on exploring the Pony Express Trail through Tooele County.

I’m taking a respite from the Pony Express Trail series this week to share a memorable experience I had in Tooele County’s West Desert the other night. I camped in the middle of Skull Valley on top of knoll 5,028 about 2.5 miles south of the LDS Chapel near Dugway Proving Ground’s entrance.

The night sky was incredible as it always is in the desert. The air was warm, still and silent, too. But I decided I wasn’t ready for sleep yet, so I put on my backpack, grabbed a few bottles of water, and headed into the night without a plan.

The black sky was like velvet with bright diamonds scattered across it, and dark clouds drifted in and concealed some of them. I followed a rocky, two-track trail off the top of the knoll that dropped precipitously and I had to be careful of my footing in the dark. A “two-track” is an old dirt road that has one worn tire trail, untrammeled space in the middle and then another worn tire trail parallel to the first.

These two tracks meander as they cross the desert and it is enjoyable to hike one in the middle of the night to see where it goes.

An occasional flash of lightning briefly and silently lit the desert, while a pre-moonrise over the Onaqui Mountains painted passing clouds and a rain squall orange.  I heard a low, ominous rumble of thunder, but since I was prepared with rain gear, I continued on. In situations like that, I contemplate what I would do if lightning got closer. I resolved that I would lay down against one of the barren hills and ride it out, just like I did in New Mexico’s White Mountains when a powerful summer thunderstorm ripped the mountain top I was on over 10,000 feet high. Not a fun experience, but when you have few options, and you’re committed to a trail, you have to consider what you would do.

Rays of moonlight were now turning fringes of clouds above the Onaqui’s rim gold. At 10:49 p.m., a large, orange moon slowly peeked over the Onaquis. I have seen the sun’s rays beam through clouds before on many occasions but I never had witnessed moon rays until that evening and it was incredible. The moon was like a giant flashlight sweeping over the mountains and desert. I used no flashlight while out there. When the moon wasn’t obscured by clouds, the going was easy. When it was behind the clouds the desert was dark so I had to take a little more care.

It’s a Catch 22 situation whether to use a flashlight on a night hike or not. Don’t get me wrong; I always carry two of them — but when you shine a bright light in the black, it destroys your eyes’ adjustment to the decreased light conditions, which is sometimes referred to as “night vision.” In the Marines, many years ago they told us that it takes 30 minutes to regain your “night vision” after you see a bright light in the black. So whenever I can, I go without the light, but I keep it handy in case I come upon a snake, or a particularly rough spot.

I was in a depression between two desert knolls when a cool breeze picked up, which is a precursor of a distant thunderstorm coming my way. There were several spurts of bright lightning and the thunder was louder. Then I heard several coyotes start to yip, howl and scream in the black. The strange thing about coyotes is they’re always around. When they become vocal, it is sometimes disturbing to realize how close they are, but you never can pinpoint their location.

I came to a fork in the road, and with the moon darkened by clouds, I decided to acquire some reference points so I didn’t get lost and have to walk farther than I wanted. I used the road’s fork as the reference and headed cross country towards knoll 5,047. The crunch of burned desert foliage under my boot was loud. I came upon a cow trail that was about 24-inches wide and compacted, and I followed it for a while.

I climbed up to the rocky top of knoll 5,047 and the wind picked up and it was cold. It’s interesting how an hour ago the desert was still and warm, but now it was windy and cold. The terrain changed from desert powder and sand to rocky limestone that was blotched with lichens. The rocks were sharp and unpleasantly shaped, so I had to be careful on the ascent, which couldn’t have been more than 100 feet or so above the valley floor.

At 11:45 p.m. I was on top of the rocky knoll and the wind blew so hard I had to brace myself to keep from falling over. The moon popped out of the clouds and I could see Red Pine and Davis mountains . The metallic lights of Dugway, Terra and a few small ranches in Skull Valley were visible to the north. Then I noticed a semi-truck with a double trailer creeping down Skull Valley toward the Pony Express Trail and I wondered what business a rig like that would have in a place like this in the middle of the night. Maybe it was best I didn’t know and that I was far away.

I took some water and snacks out of my pack and enjoyed the scene from the top of the knoll and then I headed back down the rocky slope to the valley floor. I came upon an old pond that was so dry the surface was all cracked and formed different columns of mud. I wondered if some toads were sleeping under the mud’s surface. I then climbed back up to the top of the knoll where my truck was parked. Just as I was about to climb in and bed down, I saw a golden, sparkler-like shooting star, track from east to west and burn out.

No amount of narrative can ever do justice to a night in the West Desert. I imagine that some of the things I witnessed are similar to what Vincent Van Gogh saw in his dreams before he painted his famous works — because the desert panorama at night truly is a dreamscape.

If you ever go out there at night, take several precautions. Study maps of the area before you go and make sure you have visited it in daylight so that it’s not the first time you’re seeing that country. Take a flashlight or two, plenty of water, and a walking stick in case you need to put something between you and a snake.

If you are not accustomed to cross country travel in the dark, stick to a well-defined trail. To enjoy the desert, you don’t even have to go for a walk, just throw out a lawn chair and watch the desert and sky. These are experiences you will never forget and they are free.

To get to knoll 5,028 and 5,047, drive west on state Route 199 over Johnson’s Pass and then turn left just after the LDS chapel near the Dugway main gate. Follow the Pony Express Trail access road south for about 1.7 miles. At this point you will see a BLM signboard on the left that talks about the wild mustangs next to an old stock pond. Turn left here and you are in the knoll country.