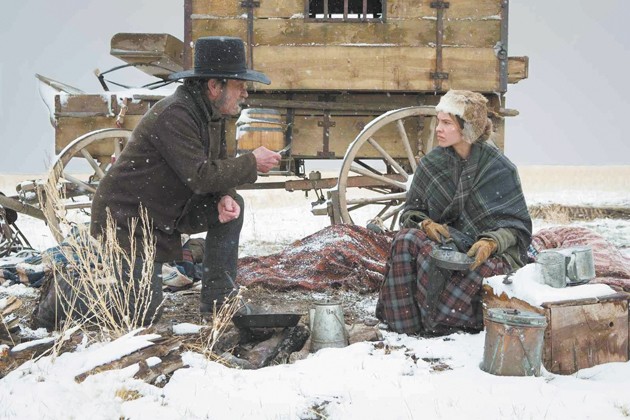 Tommy Lee Jones and Hillary Swank star in “The Homesman,” a new Western about a sketchy drifter helping a wagon of women cross the plains. The film is one of several holiday-season offerings opening in the next few weeks. image courtesy Roadside Attractions

The holiday movie season is in full swing with hits like “The Hunger Games: Mockingjay Part 1” already in theaters. But there are plenty of films left as the year draws to a close, some long-awaited and some that look utterly forgettable.

An archeological team tries to solve the mysteries of a lost pyramid, but finds themselves haunted by an ancient creature. You know, if things are just a little too merry and bright and you want a little horror to spice things up a bit.

Tommy Lee Jones, Hilary Swank and Meryl Streep headline this new Western about a trio of women who employ a tough driver and a drifter to help them across the plains. It’s been a while since we’ve had a good Western. Maybe this will be it.

Everyone knows the problem with 1956’s “The Ten Commandments” is that there weren’t enough explosions. It only took 58 years, but Hollywood has finally remedied that with this retelling of the story of Moses and taking the Hebrews out of Egypt starring Batman. Er, I mean, Christian Bale.

As far as I can tell from the little I’ve seen about this one, it’s about a guy who thinks broadcasting his wedding on reality television will help make it big as a comedian. I’m not sure what those things have to do with each other, but I guess that answer is why you go see the movie.

“The Hobbit: Battle of the Five Armies”

Peter Jackson mercifully wraps up his butchering of J.R.R. Tolkein’s treasured novel, which will probably involve tarnishing more beloved characters and gratuitous Legolas-based violence, and making boatloads of money while he does it.

“Night at the Museum: Secret of the Tomb”

The third and final adventure of Larry the Magic Museum Security Guard puts Ben Stiller’s character in London, where he, and the rest of the gang, including Robin Williams, have to try to save the magic that allows the exhibits to come to life.

Reese Witherspoon hikes and camps over a 1,100-mile trek as her character tries to get over a recent loss. Based on a true story, which I will not be trying to replicate the next time I have a recent loss.

It looks just like another Seth Rogan comedy, but “The Interview” is, in fact, an act of war against North Korea. If you listen to Kim Jong Un, that is. Which might be enough of a reason to watch this flick, actually.

Just in time for Christmas, the heartwarming tale of how Britain’s Alan Turing helped the Allies get an edge with his brilliant code-cracking skills, only to be imprisoned and chemically castrated a decade later for being gay. Benedict Cumberbatch stars.

Last Christmas brought us Amy Adams as a 70s redhead; this year she’s a blonde in the 50s. Based on the true story of Margaret Keane who painted some stuff that her husband took credit for. Tim Burton directs.