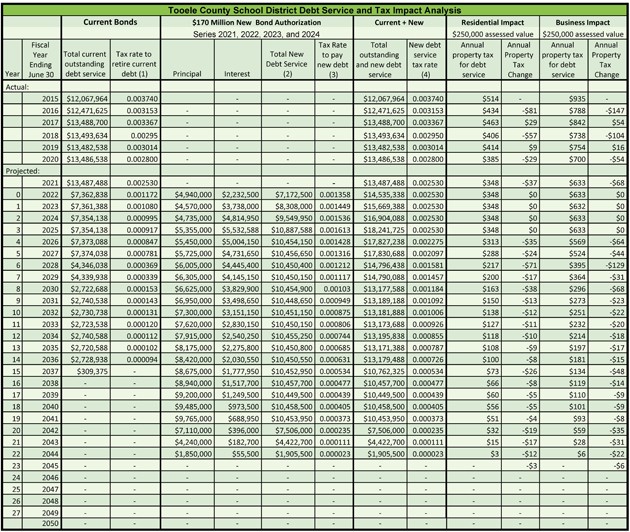 New school buildings and bonds to pay for them were the subject of a Facebook Live discussion featuring Tooele County School Board members and administrators.

The online discussion was broadcast at 6 p.m. on Thursday.

The program included time for the participants to respond to questions from online viewers.

The school board is asking voters to approve $170 million in bonds at the Nov. 3 general election. The bonds will be used to build an elementary school in Grantsville, a junior high in the Stansbury Park/Erda area, and a high school in north Tooele City.

Conceptual drawings of the buildings and their footprints were shown during the broadcast.

Bryan emphasized that this bond was not the same as the one rejected by voters a year ago.

“We’ve shaved 20 million off the bond,” Bryan said.”We looked at how we could make this work with less money.”

Other resources will be used for security upgrades for existing schools and construction contingency costs will be covered in house, he said.

In addition to the lower bond request amount, Bryan mentioned that this is the “right time” for the school district to bond for new schools.

“There will be no net property tax increase,” Bryan said.

The school district has old bonds that will be paid off. As the old bonds are paid off the new bonds will be issued resulting in taxpayers paying the same amount in property taxes, he said.

Rogers said this is also the right time to bond, because there has been an increase in the market value of property within the school district, the interest rate is at a very low point, and there has been a slow down in the  dramatic increase in construction costs.

In the meanwhile, Tooele County has continued to grow, he said.

“According to the Census Bureau there has been an 11% growth in the population in Tooele County during the last three years,” Rogers said. “We did our own count the other day and we have 21,000 plus students in both regular and online students.”

To conserve costs the elementary school will be built following the same floor plan as Old Mill and Sterling Elementary Schools.

Due to the size of secondary schools it is harder to reuse existing plans, according to Bryan.

The larger the building the more the land comes into play with considerations for slope and elevation. Infrastructure, like roads and utilities, also complicate the design of secondary schools, according to Bryan.

However, to help control costs, the school district looked at their own existing schools as well as new junior high and high schools in other school districts and borrowed design elements to help keep costs down, West said.

A question was asked if a new swimming pool was included in the building plans.

Manzione said there are no plans for a new swimming pool included in the bond plans.

But recognizing that another pool is needed in the county, not only for students, but also for the community, the school district is willing to partner with another agency in building a pool, she said.

Another question was, “Does the new high school have an agriculture department?”

“The new high school will have a full size Career and Technology Education wing, including space for Ag classes,” Rogers said. “The course offerings will depend on student interest. The classes and shops in the CTE wing will be designed to be flexible, including the capacity for Ag classes.”

“Couldn’t Harris Elementary be reopened?” was another question.

West said the district already looked at the cost of updating the Harris Elementary building.

“It was cheaper to build new than to bring the Harris building up to code so it could be used as a school,” he said.

According to Manzione, the need for an elementary school right now is in Grantsville. Reopening Harris would require busing students, which would be cost prohibitive, she said.

The Harris building has been sold for $1.1 million.The $1.1 million will be used to pay for other capital needs within the school district, Rogers said.

Bryan said he keeps hearing people ask why developers can’t be charged to build new schools. He said the state Legislature does not allow the school district to charge developers.

“But we also can’t turn students away,” he said. “We can’t put a closed sign in front of a school. We are obligated to provide an education to every student.”

With the three new schools, the school board has completed their ten-year facility plan that ended in 2020, said Bryan.

Additional questions can be emailed to bond@tooeleschools.org.

Another Facebook Live broadcast will be held on Thursday at 6 p.m.