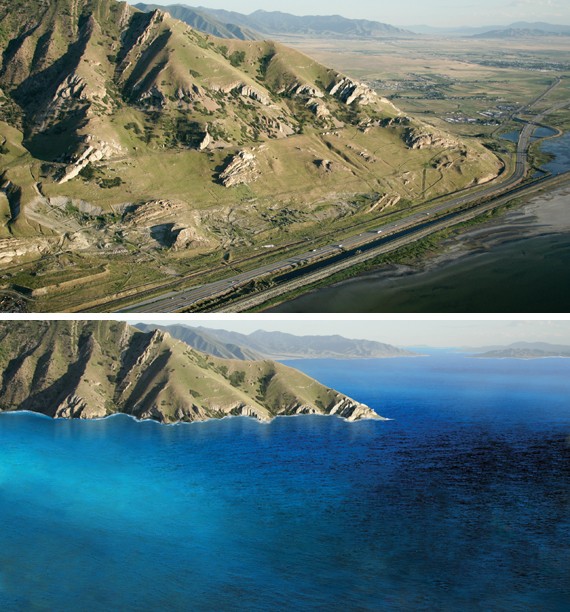 Ancient Lake Bonneville’s erosive power has scoured numerous terraces and beachheads on the Oquirrh Mountains, especially above I-80 near Lake Point (top photo). Those markings give an idea as to how deep Great Salt Lake’s predecessor once was. For a clearer view, here is an artist’s rendering (photo above) that shows what the area looked like when Lake Bonneville was at its zenith over 20,000 years ago. Illustration by Transcript Bulletin Publishing

“Bone dry” are the first words likely to come to mind after an initial glance at Tooele County’s valleys, the Great Salt Lake Desert, and most of its 13 distinct mountain ranges. But a deeper look reveals that our dry renown is a geologically recent occurrence. The why and how behind the county’s unique and often stark landforms has more to do with water than dust.

During a spring storm not long ago, I was reminded of this while driving northbound on SR-36 toward Lake Point. It was raining hard, yet as I passed Erda and Stansbury Park, it began to lighten. I glanced over to the Oquirrh Mountains and saw an unexpected, natural occurrence that made me pull off the road. What I saw is with me still.

Overhead was a thick layer of unbroken and rain-swollen stratocumulus clouds. The color of brushed titanium, they hung from the sky like a huge down comforter, and extended from the Oquirrhs to the Stansbury Mountains, and out across the Great Salt Lake. But that isn’t what caught my eye; it was the point at which the base of the clouds made contact with the Oquirrhs above Lake Point.

Until about 15,000 years ago, Tooele County and more than half of Utah and portions of Nevada and Idaho were submerged by Lake Bonneville. Geologists say the massive ancient lake, predecessor of today’s much punier Great Salt Lake, was fed by a cooler, wetter climate. In fact, the lake was so large, it was suspected of triggering its own weather systems and dominated the region for hundreds of thousands of years. The Bonneville level is the highest point the lake attained, which geologists say was about 5,100 feet above sea level.

As Lake Bonneville began to recede from that height, it scoured pronounced “bathtub rings” of beaches, escarpments and wave-cut cliffs on area mountains. These features are pronounced on the Oquirrh’s west slopes that abruptly ascend from Tooele Valley, and even more so on the range’s north side between Lake Point and Kennecott where sharply tilted blocks of rock point skyward. And at about 900 feet above Lake Point, on an ancient beach terrace left behind by Lake Bonneville’s waves 20,000 years ago, the base of the clouds brushed against the mountains like freeze-framed surf.

What made this collision of cloud and rock so unforgettable was the clear-cut delineation between the two directly at the Bonneville level. Standing next to my car with light rain hitting my face, I envisioned being at the bottom of Lake Bonneville — and looking up through 900 feet of water to its gray surface. In one unexpected moment, the synergism of light, land and sky allowed me to briefly comprehend the depth and power of this ancient lake that shaped much of Tooele County’s landscape.

There have been many times over the years where an unexpected, natural occurrence revealed something about Tooele County’s past to me. I look forward to many more. With the Vernal Equinox — the first day of spring — just six weeks away, and hopefully generous wet storms to follow, maybe there will be another opportunity to imagine Lake Bonneville’s depth and immensity in such a poignant way.

I’ll be looking. Maybe you will too.