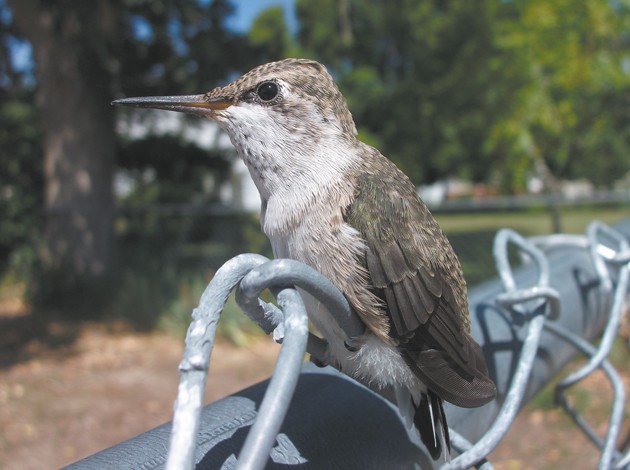 A young hummingbird perches on the fence of a Tooele County yard. The youngling was only photographed and it eventually flew away safely.

When it comes to nesting and child rearing, it is the mother hummingbird that provides all the work as a single parent. Males on the other hand only put their efforts into attracting mates and copulation. They take no part in raising the young. Like the peacock, male hummingbirds try getting the attention of the female by showing off their feathers. They do so by exposing themselves in the sunlight to show how vibrantly colored they are. Other times, different species with non-colorful plumage will exaggerate their flying skills by swooping, darting, zipping about, and even dive-bombing the females as fast as they can without hitting them. Some male hummingbirds combine both these tactics.

After mating, a female ventures for a proper nesting site that will shelter both the nest and the eggs from wind, rain, sunlight and predators. Most nests are built inside bushes or in a forked branch of a tree. Some nests however, depending on the species, have been spotted on wires, clotheslines, porch lamps, wind chimes and on top of cacti. Height can also vary between three to 60 feet above the ground.

Once she picks a site, the female hummingbird will spend many hours each day to form a walnut-sized nest. This takes up to seven days to accomplish. Nests are cupped and inwardly curved, which provides extra protection for the eggs so they will not easily be blown out by wind. The construction of the nest is made of various materials; including moss, cattails, cotton fibers, bits of bark, leaves, lichen, thistles, dandelions, grass, lint, fuzz, feathers and spider webs. Interestingly, the spider webs are not only added to bind together all the materials, but they also allow the nest to stretch and enlarge itself as the growing offspring get bigger.

Approximately laying two to three eggs per season, mother hummingbirds provide their hatchlings food, repair the nest when the need arises and will care for her young until they are nearly grown into full adulthood. Starting from when she begins building the nest, up until her clutch flies away, this time period can average from five to eight weeks. Until then, hatchlings are fed what the adults eat: nectar, pollen and tiny insects. Their mother provides this by sticking her long beak down their throats and vomiting up her previous meal.

Taylor Lindsay, age 18, is a writer and photographer of wildlife creatures big and small. She can be contacted at CritterChatter@Live.com.