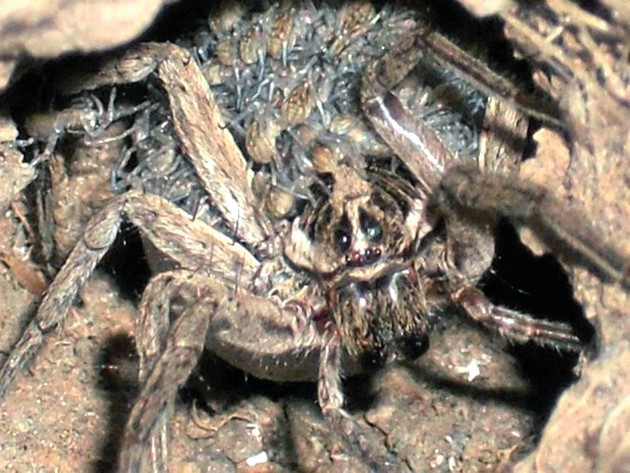 Two different wolf spiders, both hauling offspring, were found near Settlement Canyon reservoir. They were photographed and left undisturbed.

Given the name “wolf” for the way they hunt, wolf spiders are known for their predatory skills and tactics, either by waiting for passing prey then chasing them down, or opportunistically jumping them as they move about.

Their pursued meals can include ants, aphids, beetles, crickets, cockroaches, grasshoppers and other smaller insects. While having keen eyesight, sensitivity to vibrations, and camouflaging habitat-like body colors, they are also very swift and fast on their legs, whether it’s for pursuing prey or evading predators.

Wolf spiders, particularly the females, are also known for their unique motherly providence, given to protect both their eggs and hatchlings for as long as possible.

After being impregnated, female wolf spiders will wrap their eggs in a silk-wound ball and carry the egg sac wherever they go — this includes while they are hunting. However, rather than carrying the sac, the eggs remain attached to the spinneret located at the end of the female’s abdomen after being wrapped. This allows female wolf spiders to continue hunting without the sac slowing them down. Mother wolf spiders will also keep the egg sac from dragging on the ground by keeping their abdomens raised. In some cases, if the egg sac detaches from the mother’s spinneret unknowingly, she will search and track it until it is retrieved.

After nine to 27 days of holding the egg sac, the offspring then hatch and pile onto their mother’s abdomen. Though wolf spiders are not the only species to carry their own egg sacs, they are the only spider on earth willing to carry their hatchlings, which depending on the species, can range from dozens to 300 hatchlings on one back. The hatchlings are carried until they can leave and hunt for themselves, which usually takes a few weeks.

Though it is common to find wolf spiders during the time they are attentively carrying an egg sac or their young, the females are known to act aggressively and bite if disturbed or bothered. Although bites from wolf spiders are uncommon and neither deadly nor severely poisonous, they can be painful and resemble a bee sting.