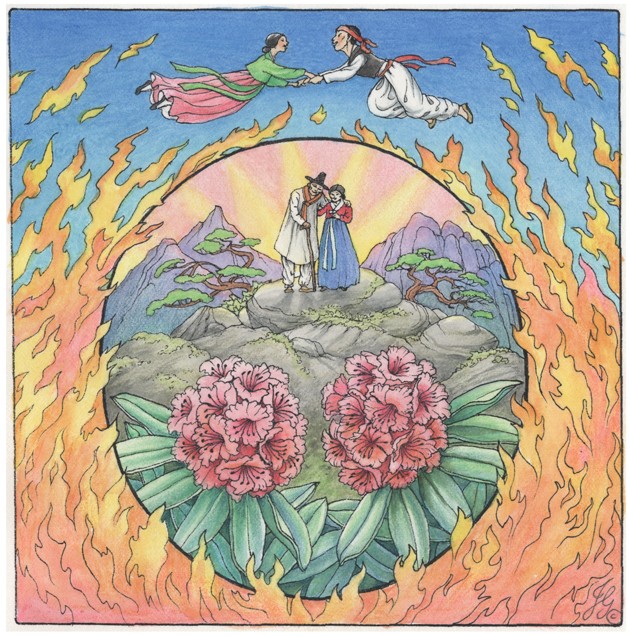 Long ago a poor old man and woman lived with their daughter, Dalai, in a hamlet high on a mountain. Every day Dalai walked into the forest to chop wood for her family’s fire. Each evening she carried a load of firewood home.

On the other side of the mountain a boy named Jinyu also chopped firewood. One day he happened upon Dalai and smiled at her, admiring her strength and determination. She smiled at him.

The next day they saw each other again, and they began to talk. Soon they were friends, and sometimes Jinyu helped Dalai carry wood up the difficult paths. One day he helped her all the way home. The two fell in love.

Dalai’s family owed a great deal of money to their landlord, money they would never be able to pay, for each month the landlord raised the interest on their debt. Day and night the couple worried. But one cold, wintry day, much to their surprise, the landlord’s son arrived at their cottage with his servant.

The young man wore silks and satins, his hair slick and his smile wide. “Good day,” he said to the couple as they opened the door. “I have come to collect the money you owe. May I come in?”

Naturally the couple welcomed him inside, for they were polite. As the old woman prepared tea, she wished she had something more to offer the young man, but the cupboards were bare.

The young man said, “You owe us a great deal of money, and I have come to collect it today.”

The old man sighed. “We have nothing to offer,” he said, “but I promise, we will pay over time.”

The landlord’s son placed a purse on the table. “I beg you, take the gold inside this purse and buy yourself some nice things.”

The old man stared in confusion. “But …”

The young man waved his words away and sent his servant to the carriage. The servant returned with a bundle of silk. “This silk is yours,” the young man said, “so that your daughter can make herself some fine clothes for a special day.”

The old man frowned, for he now understood: The landlord’s son wished to marry their daughter. At that moment Dalai arrived home.

When her mother showed her the silk, she too understood that this man wished to marry her.

“I refuse,” she said coldly. She knew the landlord’s son was a greedy, unkind man. She tossed the bundle of silk outside.

Furious, the landlord’s son stood and bowed stiffly. “Very well,” he said. He left without another word.

On New Year’s Day a messenger arrived at Dalai’s home. When her mother answered the knock, the messenger said, “Send your daughter to our master in three days, and the landlord’s son will marry her. If you fail to fulfill your obligation, you will regret it, for you will have to pay everything or be banished.”

When her mother gave her the news, Dalai was livid. “I will die before I marry that man! I love Jinyu,” she fumed. She ran to the forest where she found Jinyu and told him the news.

For a while they simply stared at each other, wordless with sadness.

Suddenly a white crane swooped from the sky toward them.

“What shall we do?” Jinyu called to the crane.

The crane swooped lower. “Outside this heaven there are nine more heavens,” the crane said. “You must not stay here.”

The couple walked into the forest, weeping and talking about what they would do. Before long they came upon a deer. “What shall we do?” Jinyu asked the deer.

“Beyond the heavens is a deeper forest,” the deer said, bowing her head. “There you might live in peace.”

By late morning, the landlord and his son and their servants and soldiers realized that the girl had escaped. They charged upon their giant steeds into the forest. They traveled fast and soon saw Jinyu and Dalai just ahead.

When they were almost upon them, great rocks and stones and pebbles rose in their path, and the horses tripped and stumbled, tossing the men to the ground.

The men gave chase on foot, but soon their path was covered with slippery moss. They slipped and fell. But again they rose, and once again they began to run.

Vines lashed out from the forest and coiled around their ankles. Thorns pierced them like daggers. The men, caught upon the ground, struggled to free themselves.

When at last they were free, Jinyu and Dalai were nowhere in sight.

“Surround the mountain!” the landlord’s son cried. “Burn it down! When they try to escape the fire, we shall catch them.”

But Jinyu and Dalai never appeared. No one ever saw them again.

Dalai’s parents searched for her through the whole winter, long into spring.

And then early one morning, as they walked a barren path, they saw new wildflowers beginning to grow.

They walked to the mountain peak where Jinyu and Dalai first met, and there they saw two fragrant blooming pink flowers facing each other.

“There they are,” the old man whispered, and the whole mountain was filled with a most marvelous scent.

The parents named those two flowers jindalai, and each spring they return — a reminder of the strength of true love. You might know these flowers as rhododendrons.